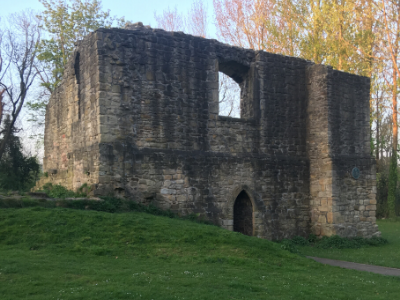 In the tranquil surroundings of Heaton Park, in the city of Newcastle-upon-Tyne, stands the ruin of the Camera of Adam.  The historical value of this building is substantial, as it is an early example of a medieval fortified hall house.

At this time, in the 13th century, not just anyone could build a fortified house.  Anyone wishing to do so, needed permission from the king.  And being a fierce supporter of the king, Adam of Jesmond received the permission he needed.

Who was Adam of Jesmond?

Not much is known about Adam’s early life.  There are records though, of his marriage to Christina de Ireby in 1261.  She was his second wife (his first wife died) and Adam was also Christina’s second husband.

This was a time of civil war between the king and the barons.  Adam was the Sheriff of Newcastle between 1262 and 1264, and then again during 1267.  He strongly supported the king and ensured that the Newcastle and Northumberland area remained “on side”.  It was as reward for this on-going support, that the king (Henry III) gave Adam permission to build his fortified house.

The fact that Adam needed a fortified house is interesting.  He was not under threat from local barons, as one might suspect.  In fact, Adam was under threat from the local inhabitants of Newcastle!  He was known to be corrupt.  He was also known to have abused his position as Sheriff of Newcastle to “gather monies not due to him” and to embezzle funds.  Adam of Jesmond was not a well-liked man!

The Camera of Adam

The Camera of Adam was completed in 1260.  The “camera” was the main hall where feasts were held.  This hall was situated on the first floor of the house and gave the house its name.  Locally, the structure is also known as King John’s Palace.  This is however misleading, as King John never visited this property – he died 50 years before it was built!

The hall was reached via a stone staircase.  The ground floor was used mainly for storage and had narrow slits for windows.  On the first floor, the main camera (feast hall) and family living quarters were situated.

The house was constructed from coarse-grained sandstone blocks.   Currently, the visible remains include the North wall and part of the East wall and earthworks to North and South. The North wall survives to its full length of approximately 12m, and stands to a height of about 8m. There is a large window on the first floor level – above the main entrance - which would have lit the principal room, the hall. 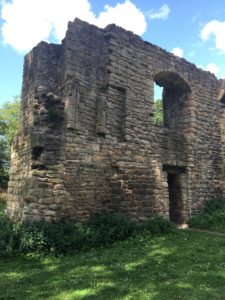 The Northernmost three metres of the East wall are thickened by an extra 0.2m and probably supported a turret on the North-East corner. A window is present at the point where the thickness of the wall is reduced. Internally both the North and East wall are reduced in thickness at the first floor level to create a projecting internal ledge to support the floor. The remains of the west wall can be seen as a low earthwork extending out from below the doorway jambs in the North wall.

Then it was Time for a Crusade

Being a supporter of King Henry III, and friend of Prince Edward (later King Edward I), Adam of Jesmond joined the 9th Crusade to the Holy Land.  This Crusade is commonly thought of as an extension of the 8th Crusade and took place between 1271 and 1272.  This was the last Crusade.

There are no records of Adam’s death, but he must have died in the Holy Land in 1271.  In January 1272, his widow claimed dower from his lands, through the courts.

Being very much disliked by the people of Newcastle, his house – the Camera of Adam – was not cared for after his departure to the Holy Land.  It was left to deteriorate and fall into disrepair.

Adam and his wife had no children (even though he had two illegitimate sons – Adam and Simon), so his heirs were his cousins (Margery Trewick and Richard Stikelawe).  These heirs seem to also have abandoned the Camera of Adam.  The widow Christina remarried on 3 May 1273.  Her new husband was Robert de Brus, the 5th Lord of Annandale.

Until 1879, the ruin of the Camera of Adam was used as farm buildings.  At this time, the property was taken over by the city of Newcastle.  In 1980, it was listed as a Grade II scheduled monument.

The Medieval Old Kirk in Temple →