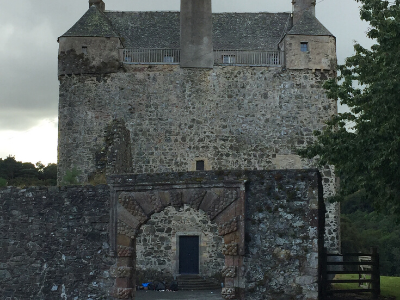 Disease had been in Mary’s bower,

And slow decay from mourning,

Though now she sits on Neidpath’s tower,

To watch her love’s returning.

From:  The Maid of Neidpath by Sir Walter Scott

We almost missed it!  We had just left Peebles and were travelling on the A72 towards Edinburgh, when my partner’s eagle eye spotted Neidpath Castle through the trees.  It was impossible to stop immediately so I had to drive further up the road before turning around, to head back to the little path to the castle’s entrance.  A sign at the top of the path read: “Sorry, closed”.  But we were there in the moment and really wanted to get a better look, so we drove further down the path towards the castle entrance.

The Architecture of Neidpath Castle

Neidpath Castle is a very tall, L-shaped tower house with rounded corners.  The battlements are roofed and the sentry walk is a balustraded balcony.  What I found interesting is that there are very few windows (even for a castle!) and those that are present, are mostly tiny.

Since the castle was closed (and we subsequently learned that it is not open to the public), we could not gain access to explore the interior.  I have however done some research (as always!) and found out that the basement and first-floor hall are vaulted, and the hall is further divided by a wooden floor into two storeys.  There is apparently also a pit dungeon.

The present castle was built in the 14thcentury, by Sir William de Haya.  The Hay family held Neidpath Castle until the 17thcentury during which time it received several notable visitors. Mary, Queen of Scots visited in 1563 and her son, James VI in 1587. 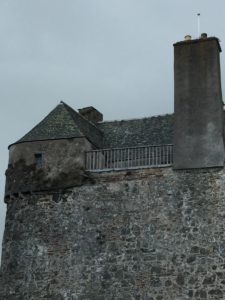 In 1645, Neidpath Castle was garrisoned against the Royalist forces of James Graham, 1stMarquees of Montrose.  The following year though, John Hay of Yester joined the King’s party and was created 1stEarl of Tweeddale by King Charles II.  The castle sustained some damage during the onslaught of Oliver Cromwell’s forces and so during the 1660’s the 2ndEarl of Tweeddale remodelled the castle and had several outbuildings constructed.  Some of these are still there but certainly parts of the outbuildings and outer wall are now sadly in ruins.

Unfortunately, this 2ndEarl of Tweeddale became bankrupt and had to sell Neidpath castle to William Douglas, 1stDuke of Queensberry, in 1686, ending the Hay family’s ownership of the castle.

In 1693, Queensberry gave the castle to his son, also called William Douglas (later the 1stEarl of March and 2ndEarl of Queensberry).  He made several alterations to Neidpath in the 18thcentury before passing it on to the 3rdEarl.  At this point in the history of Neidpath Castle, it was let to tenants and started to suffer neglect.  By 1790, the upper storeys of the wing had collapsed.

It was still in use, however and visited by Sir Walter Scott in 1803.  He wrote a poem (The Maid of Neidpath) based on a local story that the castle is haunted.  The story goes that Jean Douglas, youngest daughter of William Douglas, loved the son of the laird of Tushielaw and wanted to marry him.  Her father considered him below her station and forbade them to marry.  This caused her to die of a broken hart and is said to haunt Neidpath Castle.

Upon the death of the Duke in 1810 the Earl of Wemyss inherited the castle.  The current Earl of Wemyss still owns the Neidpath Castle and takes his courtesy title, Lord Neidpath, from it.

The castle is not normally open to the public (except by special arrangement).  It is however available for weddings, filming and other special occasions.  The beauty of this lovely castle can fortunately also be appreciated from a distance, as it can be viewed from the main road (there is a small viewing point and parking area).  It is well worth a stop when you are in the area.