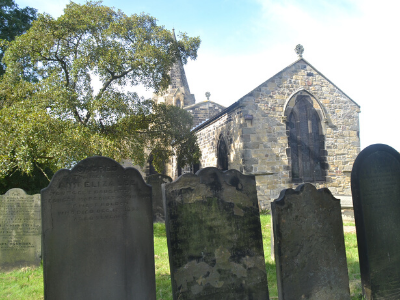 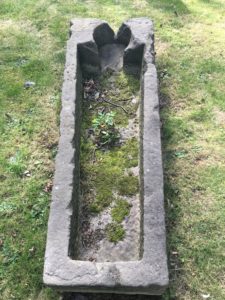 As part of the Heritage Trail, I visited the delightful Grade I listed St Nicholas Church in the North East of England.  It was a sunny day and walking through the churchyard, I loved the sun streaks flooding between the large trees.  Peaceful. And beautiful.  I do love churchyards.  And this one really kept me busy for a while – exploring interesting gravestones all around the church.  I also spotted two stone coffins on the Western side of the church.  These are medieval and were excavated in the last century.

The History and Architecture of St Nicholas Church

It was always thought that the church was first built around 1220.  However, a recent survey was conducted which re-dated St Nicholas to AD920.  During my visit, the warden pointed out the Saxon stonework, which can be seen from both outside (South wall) and inside (near the organ).  At that time, it was only a small rectangular building.

The tower, nave extension, chancel and sanctuary were built in the 13thcentury.  The spire (in stone, which is quite rare) as well as the North and South aisles were added around 1300.  The chancel was extended twice (it certainly is longer than usual).

Finally, extensive renovation was completed in the 1870’s to bring the church to what we see today.

Exploring the Interior of the Church

The font is pre-1600, though the exact date is unknown.

There are two ancient bells in the belfry – one inscribed with the date 1536.  Sadly, I couldn’t actually see these bells, as the little ladder into the tower looked a bit too scary for me to attempt climbing up! I was happy to take the warden’s word for it.

In the North aisle, I spotted a memorial tablet, listing previous Rectors of the church. The warden was rightly proud to point out that it has a complete list of all Rectors since the 13thcentury.

The warden also took me across the church to the South aisle where they keep a beautiful wooden box.  In here they used to keep the Book of Remembrance, dedicated to all those who served in the Great War.  This book is now stored in Durham.

In the Sanctuary, you can find a Double Piscina in the South wall.  This is a rare sight, which really excited me. Very few Double Piscinae are to be found today.  Also, in the North wall of the Sanctuary, is a stone Effigy of a robed priest – it may be a former rector – dating from the 14thcentury.

The Exterior of St Nicholas Church 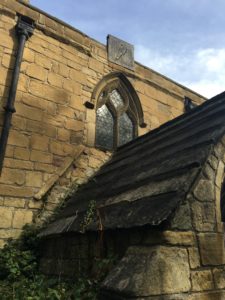 Another not-to-be-missed feature can be found just above the main entrance (on the outside). This is an amazingly accurate sundial dated 1792 – worth a look!   William Wood was a local stonemason.  He carved the sundial, erected it and inscribed his name along the top surface where it can still be seen today.

The roof of the church is interesting.  On the Eastern side of the tower, the dripstone of the original roof can still be seen.  This indicates how high and steep the roof once was!  The roof probably came within eight feet of the ground, so the church must have been very dark.  The roof was however changed in the 14thcentury to allow for the extension of the aisles and insertion of the windows.