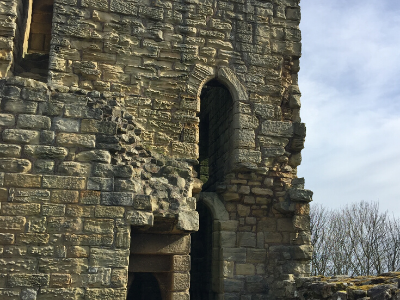 It has been on my bucket list for a while, to visit the magnificent Warkworth Castle. So, we decided to take a Sunday trip to this delightful town and go history exploring.  The weather was great (even managed to get a few blue-sky pictures) and there were not too many people around.  Perfect conditions for castle crawling.

I must say right off the bat:  this is a very large historical site.  I certainly spent several hours there and could easily have been there even longer. So make sure you have enough time when you plan your visit to Warkworth Castle.  In fact, there is so much history and architecture at Warkworth Castle that I decided to write it in three parts – this being the first of the three.

The History of Warkworth Castle 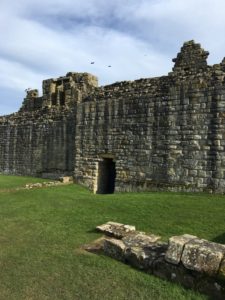 Eastern-most walls of the bailey where the stables once were.

The river Coquet forms a tight loop at Warkworth.  This, of course, is the perfect place to build a defensive castle. Warkworth Castle stands solidly within the river’s loop – dominating the surrounding landscape.

The castle is a traditional motte-and-bailey structure.  The motte created within the loop of the river and the bailey (fortified enclosure) built around it.  It is thought that the current castle layout was created by Robert fitz Roger around 1200. The powerful Percy family then took ownership and developed it further over the next several centuries.

The Montagu Tower at Warkworth Castle 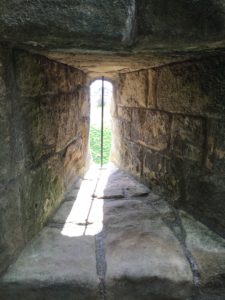 An arrow slit in the wall of Montagu Tower

I knew I had to explore the castle systematically – there is just so very much to see!  So I started at the Montagu Tower, to the right of the entrance (I decided to bypass the entrance for the moment and come back to it at the end of my visit).

This tower forms the Southeast corner of the bailey and provides a magnificent view in that direction.  It is believed that it was built by John Neville, Lord Montagu (Earl of Northumberland 1464 – 1469).  The upper floors served as accommodation for senior members of the household and were equipped with fireplaces and latrines.  The tower’s basement was used as a stable (further stables were situated to the North along the bailey). 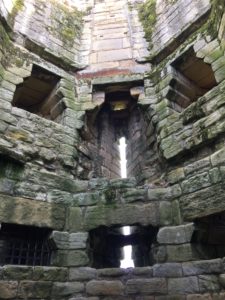 Exiting the Montagu Tower and walking North, past the stables, I came to the Grey Mare’s Tail Tower.  Just at the foot of the tower, the ruins of a small brewhouse and bakehouse can still be seen.  Both these buildings are mentioned in the 1567 survey but sadly, not much of these are still left.

This tower was built in the 1290s, possibly by masons engaged by Edward I in the building of the castle at Berwick.  Why it is called the Grey Mare’s Tail Tower is totally unknown (personally, I think it has something to do with the stables being right next to it – maybe there was a grey mare?).

What is interesting – and unusual – is the fact that the arrowloops on the face of this tower rise unbroken through two storeys.  However, on the inside, the openings only show on each individual storey. At some point in the Middle Ages, one of these arrowloops was converted into a fireplace.

Stepping back out into the sunshine, the next area of my exploration was the Collegiate Church and Crypt.  Unfortunately, not much of the actual church is left.  It is mainly a few footings (foundations) that can still be seen. The crypt however, is in much better condition.

The first documentary reference to the church is in 1534 when timber was cleared from the college church and several paintings of saints, were removed from the castle.    It seems this building was never completed.  It was probably started by the fourth earl around the 1480s, but then abandoned (unfinished) in 1489 upon his death.

Inside the Crypt at Warkworth Castle

It is quite strange how this building covers the entire area (from East to West) between the fortified walls.  So, in effect there was no way to get from the entrance to the main Great Tower – except through a small passageway under the choir.  Was this part of a defensive plan?  Blocking this tiny little passage would give occupants in the Great Tower further protection in case of a breech.

The church building itself is in cruciform.  Probably due to space constraints (being squeezed in between the Grey Mare’s Tower and the Lion Tower), most of its elements are very small. Only the high altar and choir are of reasonable size.

I went down into the crypt.  There are two rooms with a few windows, letting in a bit of light into the dark interior.  The ceilings here are vaulted and still quite dramatic.

Directly opposite the crypt, is the Great Tower of Warkworth Castle.  This is beautiful building, showing the power and dominance of he castle.  This tower is so magnificent and important that I decided to write a separate blog entirely dedicated to it.  You can read about it in part two of the Warkworth Castle series.  Part three covers the Hall Range, Lion Tower and much more.