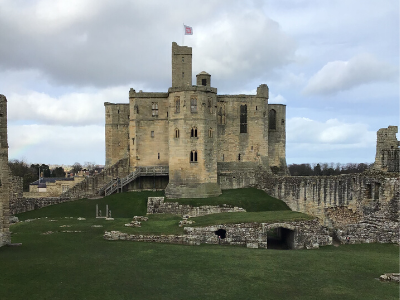 Continuing with my series of blogs on Warkworth Castle in Northumberland, in this part, I focus on the Great Tower.  In part one, I explored the Eastern-most part of the castle, which includes the Montague and Grey Mare’s Towers as well as the Collegiate Church. In part three, it’s all about the Western-most areas that include the Hall Range and the Lion and Carrickfergus Towers.

Structure of the Great Tower at Warkworth Castle

The Great Tower was commissioned in 1377, by Henry Percy, after he was made the first earl of Northumberland. 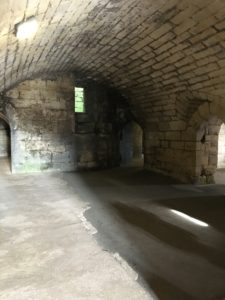 Entrance Hall of the Great Tower at Warkworth Castle

The manner in which the tower was designed is really quite interesting.  It was laid out using a unit of measurement called a “rod”. A rod equated to 16 feet, 6 inches. As masons were paid per rod, this made sense.  Calculating how many rods (or half rods) the tower would consist of, made it easy to work out the expected cost.

The tower was built in the shape of a Greek cross, with four polygonal wings radiating from a central block.  It has three storeys with various sets of stairs connecting the floors.  At the top, there is a viewing tower from where they could see in all directions.

During the Middle Ages, the Great Tower also had many battlements, pinnacles, chimneys and turrets, but sadly these are no longer visible.

Ground Floor of the Great Tower

Entering the Great Tower via its massive arched doorway, the first area is a small lobby.  Dead ahead is a Porter’s Lodge and to the left is the impressive Entrance Hall. This is in the centre of the Greek Cross layout, with several doorways leading from it to other areas.  The main staircase to the first floor is also situated here.  It is a bit of a rabbit warren and I found myself getting lost several times! 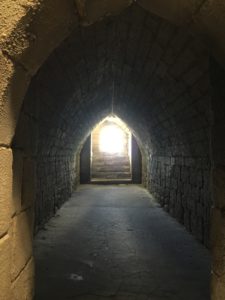 Beer Cellar on the Ground Floor of the Great Tower

There is an Accounting Room next to the Entrance Hall.  I found this area fascinating! 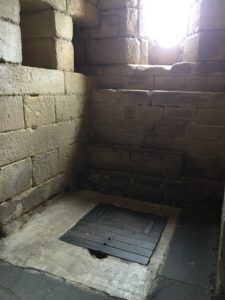 Floor Safe in the Accounting Room

It has a floor safe (now with wooden door) for keeping valuables safe, as well as a separate chamber – possibly for the senior official in charge of finances.  This little chamber has its own fireplace, latrine and wall basin.  It certainly looks quite comfortable by Middle Ages standards.

Various different service chambers occupy the remainder of the ground floor.  There is a wine cellar (two, in fact), beer cellar and food store.  Each of these rooms is connected to the first floor through stairways.  From the beer cellar, one can thus easily move upstairs to the buttery.  And from the wine cellars, stairs lead to the high table in the great hall.  This was clearly cleverly designed to make it easy for servants to reach different areas within the tower in order to serve the household efficiently.

First Floor of the Great Tower 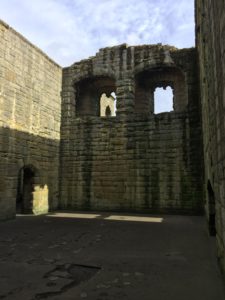 The Great Hall on the first floor of the Great Tower

The main staircase from the ground floor brings the visitor straight up into the first floor Lobby.  This was a comfortable area for visitors to wait before meeting with the earl.  It has stone benches as well as a fireplace and large windows, making it a light and warm space.

From the Lobby, an archway leads to the Great Hall.  This is where meals would be had and feasts held.  Above the dais at the “high” end of the room (where the high table would have been), are two windows connected by a passage in the thickness of the wall.  This is believed to have also served as a musician’s gallery.

There are several doorways leading from the Great Hall.  As mentioned earlier, one doorway leads to stairs to the wine cellar. Another door leads to the chapel and yet more leads to the buttery and main kitchen.

The chapel is an interesting room.  The corbels in the walls of the nave indicate that the interior was originally divided into two floors.  The upper floor forms a deep balcony overlooking the altar.  This balcony was reached via the withdrawing chambers and had its own fireplace.  Clearly this was a space from where the earl could observe Mass in private. 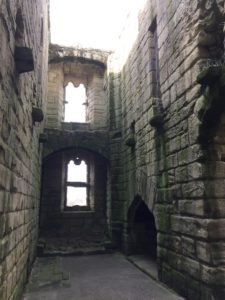 Pastry kitchen with its oven on the right

Also on this floor, is the Great Chamber.  This room was a formal reception room where the earl may have met with visitors.  The earl had four withdrawing chambers and this one is the first.  A very grand room, it would have had tapestries on the walls and a richly painted ceiling – perfect for impressing visitors.

And if you are going to host feasts in your castle, you need an efficient kitchen. This can be found right next to the Great Hall (for ease with serving).  The kitchen is a remarkably well-designed area.  It was divided into two rooms, one of which was divided into two areas with a screen (now no longer in existence).  The first area would have been the “server area” from where waiters would have taken food into the Great Hall.  Part of the same room (on the other side of the screen) is the Pastry Kitchen.  This has a massive fireplace with cauldron and oven.  The cauldron could also be accessed from the second room in the kitchens. In this much larger kitchen, are two huge fireplaces.  It is interesting that this kitchen area stretches over two storeys – this was to relieve the heat from the fireplaces.

Second Floor of the Great Tower 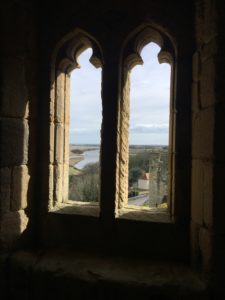 Window looking out over the river

This entire floor was dedicated to domestic chambers.  Above both the Lobby and the Buttery (on the first floor) are two private chambers.  These are known as the Duke’s Rooms.

As both the Great Hall and the Main kitchen rise through two storeys, this floor has less rooms.  On the far side of the tower (Northern side) are the earl’s withdrawing chambers and private bedchamber.

Exiting the Great Tower, I moved along to the Western part of the castle.  Here is the Lion Tower and Hall Range, which I talk about in part three of my series on Warkworth Castle.