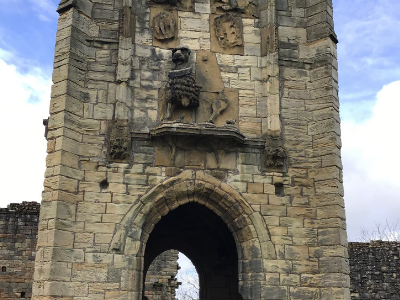 In part one and two of my series on Warkworth Castle, I talked about the towers forming part of the East walls, as well as the imposing Great Tower.  In this final part, we look at the Hall Range, Lion Tower and the South Range.

The West walls of Warkworth Castle consist of the Hall Range and Lion Tower.  The Hall Range was reached through the Lion Tower, during the heyday of the Castle.

I started this part of my exploration, in the service rooms area (to the right of the Lion Tower).  This part of the building was rebuilt around 1480, by the fourth earl of Northumberland – making use of earlier structures.  Here can be seen the ruins of a buttery and a pantry.  It seems there were chambers on the upper floors. 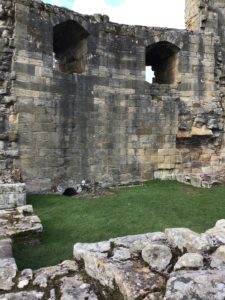 Ruins of the pantry in the Western Walls

Between the buttery and the pantry was a small corridor, leading to a square-shaped kitchen.  This room had two large fireplaces, one of which still retains its dripping pan. Just past the kitchen, I spotted a small door.  This turned out to be a side gate, built around 1200.

To the left of the Lion Tower, are the remains of the great hall, central hearth, little stair tower, chapel and Carrickfergus Tower.

The great hall was created in the late 15thcentury, using earlier structures as a base. The entire household used this area. Here meals were eaten and socialising took place.  Two square hearths provided heating in this room and this can still be seen in the middle of the room. 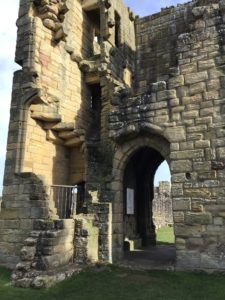 It is interesting to note that seating during meals was strictly regulated by rank.  On the “low-end”, near the service rooms, the most junior household members took their seats.  On the opposite end of the great hall, were the “high-end” tables. Here, the senior members of the household sat at the high table to enjoy their meals.  Near this high table, was a door leading to a set of stairs in the Little Stair Tower, which in turn lead to the withdrawing chambers that was reserved for the head of the household.

The Little Stair Tower is still beautiful.  There was a staircase leading to the upper floors.  Most of this has now disappeared with just a few bits of stairs still visible.  This upper floor was used by guests waiting to see the earl.

I decided to go back to the Lion Tower before exploring further South along the West walls, as I didn’t want to forget it.  There is so much to see and one can easily miss important parts of the castle. 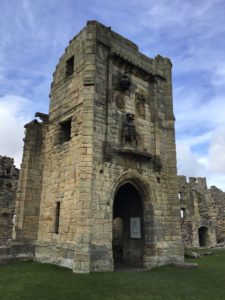 The Lion Tower at Warkworth Castle

This was the main entrance to the Range Hall, built by the 4thearl of Northumberland around 1480.  This is quite well preserved and still magnificent to see.  Above the arched entrance, one can still see several carvings depicting the power of the Percy family.  Front and centre, is the Percy lion with the family war-cry “Esperaunce” which translates to “hope”.  Above and to the left is the arms of Percy “ancient”.  This was abandoned by the family on 18 July 1343 when this seal was ceremonially smashed by the second Lord Percy.  At this point he assumed the lion as his new heraldic device to show his royalty to King Edward III.

Above and to the right of the Percy lion, are the three “luces” or fishes.  This is the arms of the Lucy family (another powerful Northern family).  In fact, these two families merged when Henry Percy (1stEarl of Northumberland) married Maude Lucy in 1381.  Their union is commemorated in the “Percy Window” at the John the Baptist Church in Newcastle.

The vaulted ground floor of the tower lead into the great hall, where one can still see stone benches along the wall.  These were used by guests waiting to enter the hall.  From this area, one could also enter the collegiate church as well as a spiral stair leading to the upper floors.

After exploring the Lion Tower, I moved south through the great hall, towards the Carrickfergus Tower and chapel. 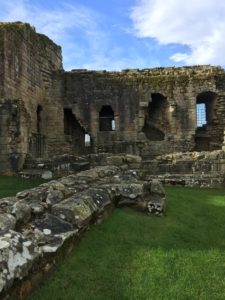 Ruins of the Great Chamber and Carrickfergus Tower

From the great hall, the next area is the great chamber.  This was a two-storey building constructed around 1200, with the great chamber on the upper floor.  One large window was set in the curtain wall, with window seats.  There was also a fireplace, but this no longer exists.

From the chamber block one could enter the Carrickfergus Tower from both ground and first floor levels.  This tower is on the far Southwest of the Castle and had two upper floors.  Sadly, none of this can be seen from the inside (the outside view is brilliant, though).  These upper floors had a fireplace and latrines.

Most of the Carrickfergus Tower collapsed in the 18thcentury. 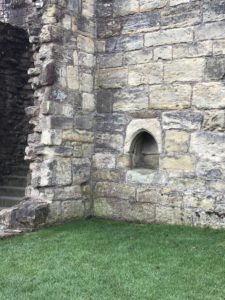 The piscina in the South Range chapel

Nestled between the Carrickfergus Tower and the main entrance gateway, along the South wall, is the South Range.

This was a two-storey structure housing the chapel and a parlour.  I am always excited to find a surviving medieval piscina so was delighted to spot one in the chapel.  Another interesting find was the door leading to a “viewing closet”. This was used by the lord to look into the chapel without having to mix with the rest of his household.

Finally making it back to the main entrance, I could spend time investigating this imposing structure.  It took my breath away with its solid splendour when I started my tour of Warkworth castle, and now – finally – I can really look at it. 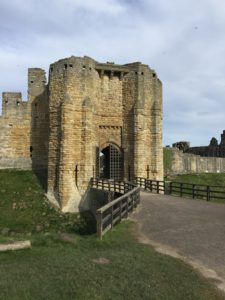 The Gatehouse at Warkworth Castle

Apart from being a formidable defence for the main entrance to the bailey, this structure was also, at one point, the bedchamber of the earl himself.  Built in 1200, the gatehouse could only be reached after crossing a bridge over the moat.  Also, at the outer end, it was closed by a portcullis, secured against a step, and an outward-opening gate.  Attacking forces would then still be in trouble, as the gate-passage is covered by a pointed barrel vault cut through with murder holes (for dropping missiles on attackers). All of this was clearly not that easy to penetrate!

Around 1400, a fighting platform was also added above the gate-passage, for extra defence.

My visit to the magnificent Warkworth Castle left me awestruck.  It is beautiful and intimidating in equal measures.  Most definitely one of my favourite historical sites!