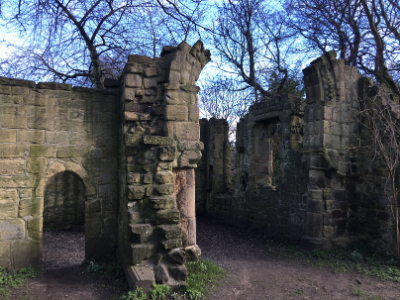 Years before the Norman conquest, just North-East of the city centre of Newcastle, an apparition of the Virgin Mary holding the baby Jesus appeared.  This great event quickly became known far and wide.  The area became known as “Jessemougth” or “Jesusmound” on account of the rock or mound the apparition appeared at. Jesusmound changed to Jesmond as time went by – today a sought-after suburb of Newcastle-upon-Tyne.

This apparition in Jesmond is – in my opinion – one of the most important events in the North East of England during the Middle Ages.  In fact, I find it quite astonishing that so little is written about it and the consequent building of St Mary’s Chapel.  So few people even know of the existence of St Mary’s Chapel and those who stumble upon it, quite possibly do not grasp the significance of this little building.

This tiny Chapel made a massive impact in the world of religion (and thus on the population) as well as the growth of Newcastle as a city. 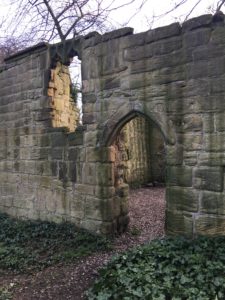 Doorway into the side chapel

Following the apparition of the Virgin Mary holding baby Jesus, it was decided to build a chapel in Jesmond in the 12thcentury.  This was named St Mary’s Chapel.  It is interesting to note this St Mary’s Chapel is the oldest church building in Newcastle.

The news of the apparition spread like wildfire – all across the kingdom. Pilgrims started flocking to Jesmond and St Mary’s Chapel became a busy site.  A hospital was also built around 50 meters from the chapel, where poorly pilgrims could be tended.  Sadly nothing of this building can be seen today. 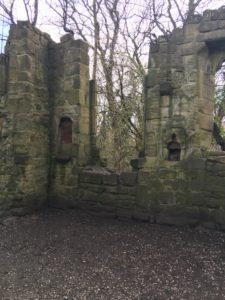 Piscina and window in the side chapel

And it is this influx of pilgrims to the area that played a part in the growth of Newcastle. It is believed that pilgrims rested in several inns in Newcastle before making the short journey to St Mary’s Chapel – and Pilgrim Street is named thereafter.  This area of the city became a lively place, with travellers from all over the country making their pilgrimage to St Mary’s Chapel.

It is believed that the chapel also housed holy relics – possibly captured during the crusades.  This, of course, hugely increased the chapel’s prestige as a shrine.  This lead to the chapel being extended in the 14thcentury.

In 1479, a rector from Yorkshire left money in his will for pilgrims to travel to the four most holy places in the kingdom.  St Mary’s Chapel were one of these – alongside Canterbury Cathedral and St Paul’s Cathedral in London.  This in itself demonstrates the high regard and importance people placed on this holy site.

The Construction of St Mary’s Chapel 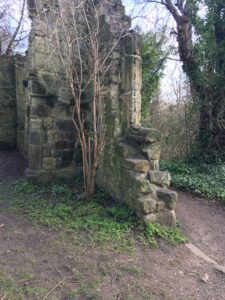 Ruins of the nave at St Mary’s Chapel

Today, sadly only ruins are left for us to explore.  The chancel and chantry chapel survive to a height of around 6 meters. At the chancel end, 2 meters of the North wall and 3 meters of the South wall are still standing.  The Nave was originally 20 meters long.

Something not to miss is the two piscinae in the South wall – beautifully preserved and still being used today (though not for its original purpose).  These days local people leave flowers in the piscinae when visiting the site to pray.

The first reference to the chapel can be found in documentation from 1272. Various legal documents from the 14thand 15thcenturies also mention the chapel due to disputes over the right to present to the living.  These documents involved both the Papacy and the Crown.

During my research, it became clear the St Mary’s chapel changed hands numerous times – both through being sold and through inheritance.

In one document I found and read, it mentions Jane (Jane Emeldon), the wife of John Stryvelyn, knight and tenant-in-chief.

“Her death took place in February, 1391. In March of the same year, a jury impaneled at Corbridge found that she had died seised of a third part of the manor of Jessemougth and of the advowson of the chapel there; that her Jesmond property was worth per annum ten shillings and no more, on account of the destruction by the Scots; that she died without heirs of the body, and that John Middleton and Christiana his wife were her next heirs according to the form of the grant and in the following May the king took John Middleton’s homage and commanded delivery of the lands to him.”

It seems the chapel remained in Middleton hands for more than 100 years.  By 1516 it was sold to Sir John Mordaunt who was a courtier of Henry VIII.  Thereafter William Cavendish (1stDuke of Newcastle 1593-1676) inherited the whole of Jane Emeldon’s Jesmond estate.

Today, the chapel is a Grade II listed building.