I was determined to go history exploring.  I’ve heard of the medieval merchant house on the Newcastle quayside, called the Bessie Surtees House and I had been planning my visit all week.  But when the day arrived it was raining.  In fact, it was absolutely pouring down!

But I’m a determined history explorer 😉

So I set off on my bicycle towards the quayside and arrived at Bessie Surtees House looking like a drenched cat.  It was lovely and warm inside.  In the reception area (where the Historic England team is on hand to welcome you), I shook off most of the water and left my backpack with the team before venturing further into the building to explore.

The first documented evidence of a house on this site dates from 1465 when Robert Rhodes sold part of the building to John Belt.  Robert Rhodes was a lawyer and a highly influential citizen of Newcastle.  It is not known what profession John Belt was in, but it is probable that he was a merchant.

This particular area of Newcastle (then known as Sandhill) is a perfect place for merchants to live and work.  It is literally a few meters away from the River Tyne that was the main route for all merchant’s wares at the time.  The custom was for the merchant to store his goods on the ground floor of the building and live, with his family, on the upper floors.  This was so he could protect his valuable goods from thieves and fires.

Much later, in 1581, it is documented that the house was sold to Ralph Cock, the previous owner being Richard Hodgson.  Ralph Cock’s descendants then lived in the house for more than 100 years.

The Cock and Davison Families Unite

Ralph Cock’s son – also called Ralph – had 15 children!  Walking through the house now and thinking how a family of more than 15 people lived here, is incredible!  Yes, the house is large.  But still, I think it would have been rather cramped by today’s standards. 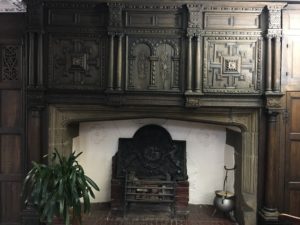 It is known that Ralph Cock Jr had four beautiful daughters (as part of his total of 15 children).  They were a bit like celebrities – young, beautiful and from a wealthy family – and it was very much expected that they “marry well”.  That is to say, any potential husband will need to be a member of an influential and wealthy family.

So, it is no surprise then when Anne Cock, one of Ralph’s daughters, married Thomas Davison 1657.  The Davison family was equally wealthy and influential and Thomas became Mayor of Newcastle in 1669.  The house then remained in the Davidson family until 1770.

An incredible fireplace in Bessie Surtees house commemorates their wedding.   Carved into the fireplace is both the Cock family and Davison family coats of arms, as well as the coat of arms of Newcastle.  The young couple’s initials are also carved prominently in the centre of the fireplace.

The Elopement of Bessie Surtees 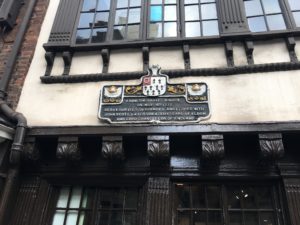 The window from where Bessie Eloped

On the night of 18 November 1772, Bessie Surtees climbed out of a window on the first floor of her father’s house.  She was met by her fiancé, John Scott and the two eloped in a stagecoach.  From Newcastle, they travelled to Blackshields, near Fala in Scotland where they got married.

Bessie’s father, Aubone Surtees did not approve of John Scott.  After all, Aubone was a wealthy banker and John Scott was the son of a coal trader.  Aubone wanted his daughter to marry a man from a better class – certainly someone who is a member of a family equal in standing as himself.  So John Scott simply won’t do – which is why the young couple eloped.

Aubone took a while to forgive Bessie and John.  He did, eventually, send his son to speak to Bessie and ask her to return home. In order to satisfy both families’ desire for an official ceremony, Bessie and John married again on 19 January 1773.  This time, it was a full and proper wedding in St Nicholas’s Church – one that both families could accept.

John and his young bride moved to Oxford where he was studying.  Eventually, he went on to become Lord Chancellor of England. So Bessie didn’t do too badly after all!

By 1784, the house belonged to a Mrs Isabell Webb.  At this time she was involved in a legal battle with a neighbour, a Mr Wilson. It seems Isabell ran a coffee house in the property and Mr Wilson had apparently built a shed that blocked sunlight from her windows.  Seemingly, it was so dark in her house that glasses were knocked against each other and candles were needed in the middle of the day.  The judge agreed with Isabell.  In 1786 the case was settled and Mr Wilson was ordered to pay damages of £30.

However, by 1801 Bella’s Coffee House had vanished.  It could very well be that it became Mrs Wilson’s Coffee House!  Plans show that Mr Wilson owned the house in 1798. Did he get his revenge after all?

By the 1890’s however, the Sandhill area on the Newcastle quayside became less prosperous. With the railways and better roads, the River Tyne was no longer as important for transport and trade, as it once was.  The entire area went into decline.

At this time, John Clayton bought Surtees House.  John was the Town Clerk and had a keen interest in ancient history (particularly Hadrian’s Wall). 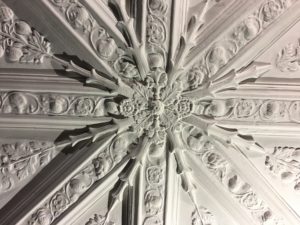 Sadly, the house went into disrepair again in the latter part of the 20thcentury. In 1978, the Tyne and Wear Metropolitan County Council bought the property and started restoration again. Since 1989 it has been leased to English Heritage where they based their offices.

Even though I had spent quite a bit of time in Bessie Surtees House, I was still soaked to the bone by the time I completed my explorations.  Exiting the building, I noted that it was still raining – heavily. So I decided to cycle across the road to the Copthorne Hotel where I planted myself in their coffee bar for the next two hours, waiting for the rain to stop.  At least it gave me ample time to do more research on Bessie Surtees House!