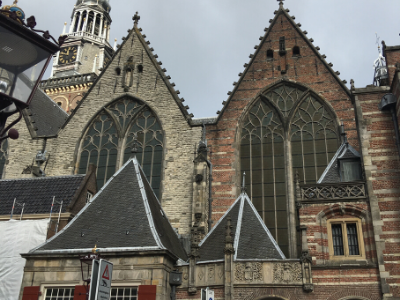 We’ve been looking forward to this trip for a while.  I love Amsterdam.  It is a city with a rich and diverse history and we visit a few times every year.  But this time was different.  This time, I could finally visit the oldest church in the city – De Oude Kerk (the Old Church). 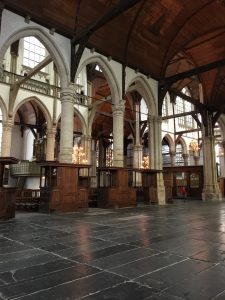 The interior of Oude Kerk

From Central station, we walked towards the red light district.  As it was still early in the morning, Warmoesstraat was quiet. This is an area known for its busy nightlife but at this time of day, it is peaceful and a delight to walk through. We stopped for a quick coffee at one of the only cafes open this early, before heading down a narrow alley that brought us right up to De Oude Kerk.

It is massive.  It takes your breath away.

Most buildings in this part of Amsterdam are tall and narrow, so De Oude Kerk is even more striking being such a large structure.  It stands out and certainly makes a strong statement.  The church covers an area of some 3,300 m2 (36,000 sq ft).

A wooden structure was built in 1250, to serve as a Catholic Church for the residents of Amsterdam.  By the end of the century, it was rebuilt in stone and had the form of a Roman Hall Church (this was the first of its kind in the Netherlands).

But the population grew quickly, so in 1340, it was decided to enlarge the church.  At this time, the aisles were lengthened and wrapped around the choir in a half circle to support the structure. Early in the 15thcentury, North and South transepts were added to the church, creating a cross formation.  Work on these renovations was completed in 1460, though it is likely that the great fires that besieged the city in 1421 and 1452 interrupted progress. This delayed the building for almost 1 year.

In 1565, the bell tower was built, which was the last major change to the structure.  With its 67 metres, for half a century the tower was the only tall steeple in Amsterdam. 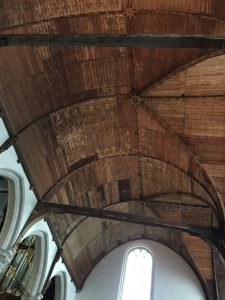 The church was built on a cemetery.  As enlargements to the building took place, less outside space was available for burials. This meant that more and more burials took place within the church.  There are around 2500 graves inside De Oude Kerk, where more than 10 000 people are interred.  The last burial inside the church, took place in 1865.

The roof of the Oude Kerk is the largest medieval wooden vault in Europe. The Estonian planks date to 1390 and boast some of the best acoustics in Europe.

Entering the church, I stood in awe.  It is magnificent.  It is massive.  There is so much to take in.  I had my audio guide at the ready and decided to start (systematically, as always) by turning right and exploring in an anti-clockwise manner. 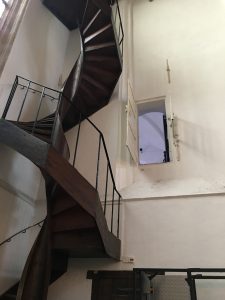 Spiral staircase in the Iron Chapel

The first room is the Iron Chapel.  In the far corner is a spiral staircase that reaches all the way to the ceiling. About halfway up the (very high) wall, I spotted a small door.  This was a bit strange, as the stairs don’t actually provide access to this door. How one actually gets to (and through) this door is a bit of a mystery.

What I did learn about this tiny door is that it leads to a room where the city’s important documents were kept in a cabinet with 45 drawers.  In medieval times, this cabinet needed five separate keys to open. This was an excellent security feature.

From the Iron Chapel, a doorway leads to the Mirror Room where I viewed the marriage notice of the great artist, Rembrandt.  It is signed by Rembrandt himself and his wife was represented by her cousin.

Exploring De Oude Kerk takes focus!  You need to look up (to take in the spectacular ceiling), look around (to see the colourful windows) and look down (at the most beautiful grave slabs) all at the same time. 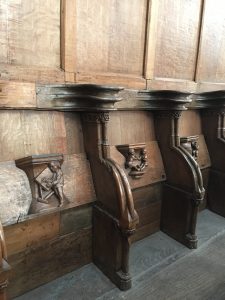 Around the High Choir, I saw several large stained glass windows.  Each one tells a story and each one speaks to what was important to those who worshiped here over the centuries.  The oldest window here is from the 16thcentury.

Take a look at the original choir benches.  These date from the Catholic period and each one has a humorous carving underneath.

I noted little “slits” in the grave slabs all over the church floor.  These puzzled me so I enquired what it was for.  It turns out that graves were reused.  Yes, you read that right.  Grave slabs were created with these slits where levers could be inserted to lift the slab.  A new burial could then be performed in the same grave.

Old bones were removed and added to the “bone pit” which can still be seen near the High Choir.

Not to be Missed

The entire Oude Kerk is not to be missed!  But there are a few areas that deserve a special mention. 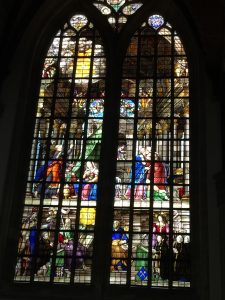 One of the stained glass windows in Oude Kerk

Near the Chapel of the Holy Sepulchre, is the grave of Saskia Van Uylenburgh who died in 1642.  She was the wife of the famous artist Rembrandt Van Rijn.  Rembrandt himself however, was buried in an unmarked grave in Westerkerk.

The Vater-Muller organ is absolutely amazing.  It was constructed between 1724 and 1726 and has 54 gold plated pipes.

In the churchwarden’s office is a table dating from 1604.  This is where the churchwardens would meet to count money that was used to maintain the church and feed the poor.  On the wall is a lovely picture where one can easily see how the church was used in the middle ages.

The church was a meeting place – not only a place of worship.  Merchants would meet here to discuss business and sell wares, people would play dice and it was also used as a shortcut across town.  Even dogs were allowed!  In fact, the pillars were tarred around the bottom parts because the dogs would urinate against it.  And “dog-hitters” were appointed (with sticks) to keep the dogs out during services.

After several glorious hours of exploring De Oude Kerk, we left feeling delighted.  A little coffee shop at the side of the church offered a place to rest and refresh.  What an enchanting place to visit!