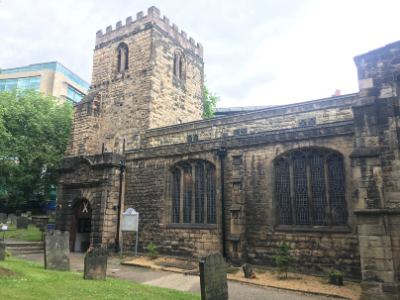 As lockdown measures in England are slowly being lifted, I was delighted to be able to start visiting the inside of historical sites.  So, for my first “proper” history exploration in over three months, I decided to visit the Church of St Andrews in Newcastle-upon-Tyne.

A sunny day meant that I could take a leisurely cycle down to the city centre, where this medieval church is nestled between large modern buildings – almost hidden away, right in the middle of the city.

Entering via the large iron gates on Newgate Street, the peace and tranquillity of the churchyard was almost tangible. It was as if I could breath in the calm even though I was in the middle of a busy city (even during semi-lockdown, the streets were bustling).  But here, in the beautiful churchyard with its large trees and green lawn between ancient gravestones, there was quiet.  What a delightful place to gather one’s thoughts and take in the centuries of history this place has to offer!

The History of St Andrew’s Church

Tradition has it that St Andrew’s Church is the oldest church in Newcastle.  This is sadly not easy to prove.  As with many historical buildings, documentation and records were lost over time.  What can be proven though is that the church was in existence in 1218, when it was first mentioned in the Chartulary of Tynemouth monastery.  And indeed, the Justices itinerant held their courts in this church in 1280. 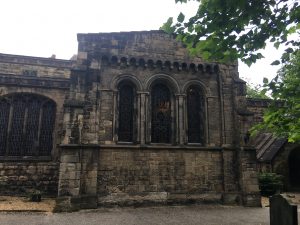 The Lady Chapel’s windows from the outside

This however does not prove that St Andrew’s is the oldest church in Newcastle.  On the contrary – St John the Baptist church was built around 1130.

However, a 2002 Dowsing study was carried out which revealed the outline of a small subsurface structure which included a nave, apsidal sanctuary and side chambers. This is typical of a pre-conquest church.

But documentation and records are not the only tools in our toolbox to discover the age of a building.  We can look at the actual structure.

The Structure of St Andrew’s Church

Eneas Mackenzie, in his book “Historical Account of Newcastle-upon-Tyne Including the Borough of Gateshead” published in 1827, makes a strong case for St Andrew’s to be the oldest church in the city. 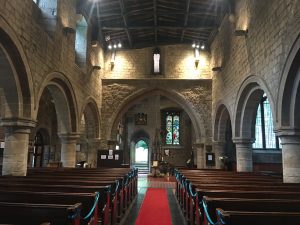 He examines the pillars and arch: “The pillars that divide the aisles of this church are circular and low, with plain octagon capitals, and supporting heavy circular arches, ornamented with a kind of embattled frette. The lofty arch which forms the entrance into the chancel is also circular, and embellished with the chevron work or zig-zag moulding. Here then we discover all the characteristic features of that style of architecture denominated Anglo-Saxon.”

Mackenzie thus places the church in the time frame of Anglo-Saxon times.  If he is correct, the church was built before 1066 and thus it is indeed the oldest church in Newcastle.

Whatever the actual date of founding, St Andrew’s Church is a spectacular building to explore.

Entering the church by its West Entrance, I was struck by the magnificent detail in the 15thcentury font cover.  The font and cover are literally the first thing one notice – and it is truly spectacular.  Here in the Baptistry are several things to look at. Looking up to the windowsill in the South Wall, I spotted three very large round stones.  These are cannon balls unearthed in the churchyard.  It is believed that they are “little gifts” from the Scots who besieged the city in 1644.  There are also excellent examples of Pauper’s Pews against the North wall of the Baptistry. 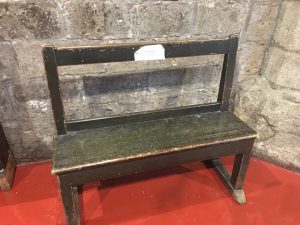 In the corner of the Baptistry, is a wooden door leading to the tower and bells. When the belfry was built in the 13thcentury, they had to add a massive Southwest buttress to strengthen the tower, due to the immense weight of the bells.   In 1726, a heavier peel of bells was installed.  Sadly, these had to be silenced rather shortly thereafter as they were causing problems with the structure.  The bells were recast in 1966 and converted to electric change ringing.

Moving out into the nave, one can only marvel at the beauty of the arches, separating the nave from the North and South Aisles.  And something really interested me here:  I spotted a clear older arch in the North side of the Nave, where one older arch was converted into two smaller arches.  It can very clearly be seen.  This only occurs once on the North side and not at all on the South side. An interesting feature for which I could find no explanation.

Of course, there is also the stunning Norman arch leading to the chancel beyond.  It dates from the late 12thcentury and is exceptionally high.  When the roof was raised during the late 14thor early 15thcentury, this arch was built higher.  Originally, the arch was 2.5 meters lower than it is today.  Some indication of this can be seen at the West end of the South walls where the lines of the original clerestory windows show the lower roof level.  Also, high up on the South and North arched walls (separating the aisles from the nave) one can see stone protrusions where the original roof used to rest.

The churchyard is very attractive.  The large trees throughout help create a very calm and peaceful atmosphere.  With gravestones on the South and West sides of the church, there is much to see and explore. 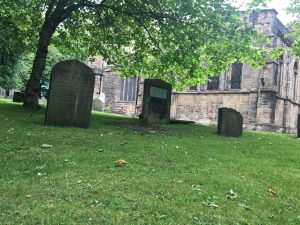 During a very pleasant conversation with Father Mike, whom I met upon my arrival at St Andrew’s, I was informed that several historical figures are buried here. Apparently, there are also four witches buried in the churchyard.  Sadly, due to Covid19 restrictions, I was unable to investigate this further as I could not gain access to church records on this occasion.

Amongst others, Charles Avison (1709 – 1770), one of the most important English concerto composers of the 18thcentury, is buried here.  Artist Luke Clennell (1781 – 1840) is also buried at St Andrews, though in an unmarked grave.  His friends later paid for a marble tablet to be installed in his memory, on the chancel wall of the church.  The nephew of Bessie Surtees, Aubone Surtees III also rests in St Andrew’s churchyard.

William Newton (1730 – 1798) was a leading architect in Newcastle.  Amongst other great works, he designed the nearby Assembly Rooms in 1776.  He was baptised here at St Andrew’s church and was interred underneath the organ inside the church.

What not to Miss at St Andrew’s Church

There is a great deal to see at this church – much more than I could possibly cover within the confines of one blog.  So, if you have limited time, I suggest you at least explore these few areas: