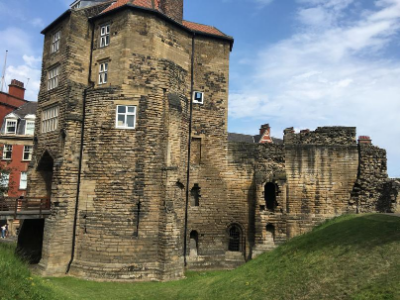 After my exploration of Newcastle’s Castle Keep, it was only logical to pop into the Black Gate too.  These two magnificent building are only a few meters apart, after all. 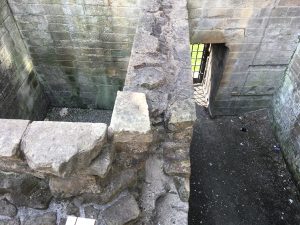 Heron’s Pit at the Black Gate

Before entering the Black Gate, it is a really good idea to explore the exterior and surrounding structures first.  I like to do this before entering any historical site – I think it gives me more of a sense of the place before I investigate further.  And at the Black Gate, this really paid off 😉

Just outside the Black Gate, on the Castle (South) side, I spotted Heron’s Pit.  This was named after William Heron, Sheriff of Northumberland and Keeper of the Castle from 1246 until his death in 1258.  He was an unpleasant man, to say the very least!  He was known to be corrupt, abusing his power to steal from locals and foreign merchants alike.  And he did not tolerate a challenge to his authority.  Whomever crossed him, was likely to be thrown into Heron’s Pit – a dark, windowless dungeon, in the depths of the building’s foundations.  Surviving Heron’s Pit was sadly not a common occurrence.

History of The Black Gate

The Black Gate consisted of two large towers with a passageway between them.  Each tower had a vaulted guardroom and a portcullis provided a way to block off entrance to the passage.  One can still see the vertical grooves in the walls, where the portcullis could be raised or lowered, by means of chains or ropes attached to an internal winch.  This provided much needed security for the Castle Keep.

Evolution of The Black Gate

Originally, the Black Gate would have had a flat roof.  This however changed over the years.  In 1618, the gatehouse was leased to Alexander Stephenson, a courtier of King James I.  He made substantial changes and rebuilt the upper floors.  He then let the Black Gate to various tenants.  One of these tenants was a man called Patrick Black (which is where the name Black Gate originated). 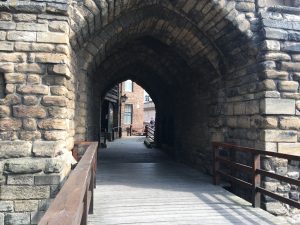 Barbican of the Black Gate

Further changes occurred as time went on.  Houses were built along both sides of the passageway and the Gatehouse turned into a slum (housing up to 60 people at one point).  Part of the building was used as a public house, further decreasing the reputation of the area.

By the mid-1800s, this area was one of the poorest areas in Newcastle.  In 1856, there was a proposal to demolish the building as it was classed as “a great nuisance”.  Thankfully, the Society of Antiquaries of Newcastle upon Tyne leased the Black Gate from the Corporation in 1883 and converted it into a museum and meeting place.  They oversaw extensive restoration in the mid-1880s, including the addition of the top floor.  At this time, the drawbridges were also replaced with wooden footbridges.  The Society used the Black Gate as their meeting place until 2009.