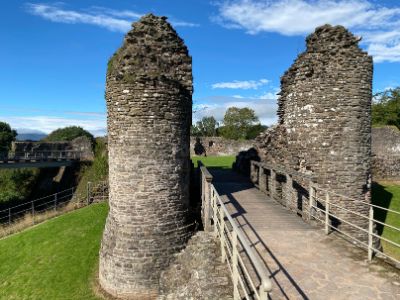 In response to the Welsh revolt, King Stephen decided to bring together three castles to defend the Monmouthshire region. The “Three Castles Lordship” was thus established in 1135.  The Castles in question are the White Castle, Grosmont Castle and Skenfrith Castle.

I wanted to know more about the Three Castles and their history, so during an incredibly full-on visit to Wales, we set off on a hot September morning to explore.  White Castle was first on the list.  Our GPS however took us to a farm!  But the friendly farmer gave us directions to White Castle (all along this lane, Dear, up the little hill and where the road ends, you’ll find the Castle).  Thank you, kind Mr Farmer 😉

And we were very lucky.  There was no-one else there which meant we could explore without interruption and we had beautiful blue skies for good pictures.  What more can a history explorer ask for? 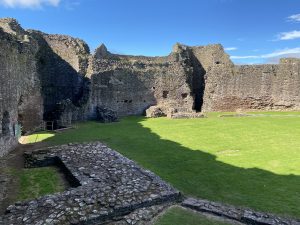 Even though the Castle is ruinous, it is still very impressive.  White Castle has an outer ward and an inner ward, so the first to explore was the outer Gatehouse.  From here, we could see a large expanse of open field (the outer ward is 320 by 170 feet) with the outer curtain wall stretching around in an arc before meeting the moat in the far corner, near the magnificent entrance to the inner ward.

Walking across the drawbridge to the inner ward, I felt a sense of being transported back to the Middle Ages.  The massively high gatehouse makes one feel small and vulnerable.  Looking below the drawbridge, the moat filled with water is still there.  I was very pleased that I didn’t arrive here at White Castle as an enemy during medieval times!

The walls of the inner ward are still mostly solid even though it is in ruins.  There are also several foundations of buildings visible (including the Keep on the South side), as well as the Water Well.  To the right of the Gatehouse are the ruins of the Bakehouse, Malthouse and Kitchen.  Standing inside the large inner ward, one feels the power this Castle projected – it is awesome in the true sense of the word.

White Castle in the 11th and 12th Centuries

Shortly after the Norman invasion of England, in 1066, the Normans started pushing their way into Wales.  William fitz Osbern was made Earl of Hereford and his lands included the Monnow Valley.  He commissioned this castle to be built in the valley, to protect the route between Wales and Hereford.  It was originally called Llantilio Castle, but later renamed White Castle.  This first Castle was built from earth and timber, with three large earthworks forming an inner and outer ward.  This was thought sufficient to protect the valley route. 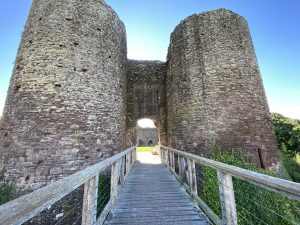 Drawbridge and Gatehouse of Inner Ward

However, by 1075 the earldom’s landholdings were being broken up after William’s son, Roger de Breteuil rebelled against the Crown.

A major restructuring of landholdings took place in 1135.  This was in response to the Welsh revolt.  As part of this restructuring, King Stephen created a new Lordship known as the Three Castles.  This included White Castle, Grosmont Castle and Skenfrith Castle.  The Welsh revolt however continued and the de Mortimer and de Braose Marcher families worked together to attack the Welsh during the 1170s.  This moved the Welsh to attack nearby Abergavenny Castle in 1182.  The Crown feared that the Three Castles will be attacked next, so White Castle was made ready for assault.  Between 1184 and 1186, Ralph of Grosmont built a stone curtain wall around the inner ward and added a Keep to White Castle.

In 1201, the Three Castles were given to Hubert de Burgh.  Hubert have been a supporter of King John for many years (being John’s household Chamberlain when John was still a prince).  At this point in time, White Castle was a small military fortification with a small garrison stationed there.  It was said that accommodation was “miserable” and “unpleasant”, so Hubert decided to start upgrading his Three Castles. 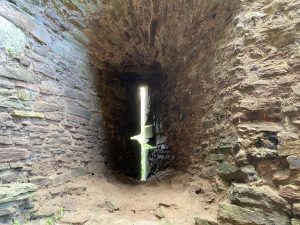 Before work could start at White Castle, however, Hubert was captured while fighting in France.  King John promptly gave the Three Castles to William de Braose but then again dispossessed him of his lands in 1207 (medieval politics can be cruel!). William’s son (also called William) however retook the Castles during the First Baron’s War.

By this time however, Hubert was back in England and made the Earl of Kent.  He recovered the Three Castles in 1219 with the support of King Henry III.  But medieval life could be unpredictable (as we have already seen).  In 1232, Hubert again fell from power and lost all his Castles.  Walerund Teutonicus was the next to hold White Castle and her sister Castles.  He built a new Hall, Buttery and Pantry in 1244.  In 1254 White Castle was granted to Prince Edward (King Henry’s eldest son).

At some point during the 13th century, the Castle was almost entirely rebuilt (historians are unclear as to the exact dates and under who’s orders).  The Keep was demolished, a new Gatehouse and several Towers built, and the outer ward was strengthened.  It is at this time, that White Castle was renamed to “White Castle” from its original name of Llantilio.  It is thought that this was due to the white rendering on the external walls.

In 1262, the Welsh again attacked Abergavenny Castle.  Again, the Three Castles were put on alert.  Again, the threat passed without incident.

By 1267 things have settled down a bit.  The Three Castles were given to the Earl of Lancaster and White Castle remained under the control of this earldom (later Duchy) for centuries.  After Edward I’s conquest of Wales in 1282, White Castle had little military use.  For the next 200 years or so, very little work was done to White Castle, apart from the odd bit of repairs.  By 1538 White Castle was no longer in use and was described in 1613 as “ruinous and decayed”.

In 1825, White Castle along with her sister Castles, were sold to the Duke of Beaufort and in 1902, Henry Somerset (the 9thDuke) sold White Castle to Sir Henry Mather Jackson.  Sir Henry tried to preserve the Castle by ridding it of the Ivy that has been growing all over the structure.  In 1922, White Castle was placed into State care and is currently being managed by Welsh Heritage agency, CADW.

What Not to Miss at White Castle