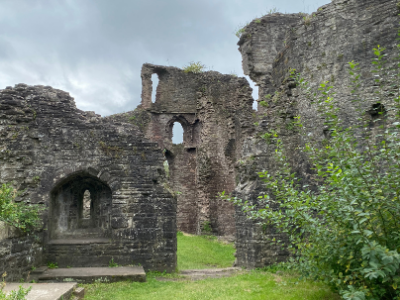 After a long day of exploring historical sites, we thought we’d sneak in one more 😉.  And Abergavenny Castle is really close to where we were staying that night.  (History geeks will find a way to justify more exploring, any way they can! 🤣 )

Driving up Castle street in Abergavenny, we found a massive parking area on our right, just a short walk from the Castle.  (Do remember to take coins along when you visit – the parking ticket machine only accepts coins).  As we entered the Castle grounds, a very friendly young lady from Abergavenny Museum told us that the Castle was closing up for the night.  They close a 4PM and we arrived six minutes before closing time! 😱. Crikey!  We explained that we have travelled a long distance and asked of we could have a few minutes in the Castle.  Thankfully, she was very kind and understanding – she allowed us to explore for a few minutes and gave us loads of information too.  Thank you! 🙏 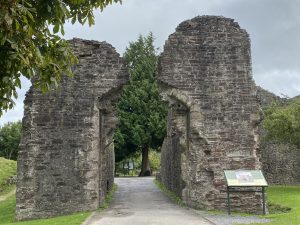 By the 1160s, parts of the Castle were rebuilt, and a curtain wall added.  Then, around 1190, the Castle was almost entirely rebuilt, using old red sandstone.  At this time, five towers were built along the curtain wall and a new Keep built.

In the 13th and 14th centuries, the Castle was expanded by the Hastings family, adding the towers on the Western side for accommodation.  Sadly, during the English Civil War, Charles I ordered the Castle to be destroyed.

Entering from the North, the first structure one sees, is the Gatehouse, with curtain wall stretching to the right.  When the current Abergavenny Castle was first built (late 13th c to early 14thc), it did not have a Gatehouse – merely an opening in the curtain wall.  It is believed that this Gatehouse was built in the 15th C, in response to the last Welsh War of Independence.

Abergavenny Castle did not have a moat.  Instead, there was a dry ditch with a drawbridge at the Gatehouse.  This drawbridge (no longer extant), was raised and lowered by means of a rope winch.  The Gatehouse had accommodation on the first floor (with fireplace and large windows) where the Constable lived.  He would have been in charge of the Castle and its garrison.  The garrison consisted (in 1405) of 80 mounted soldiers, their armed servants and 400 archers.

Arched entrance to the cellar of Mill Tower

After exploring the ruins of the Gatehouse, I walked into the interior of the Castle.  I spotted a fenced-off area dead-ahead.  It was a bit overgrown with grass and plants, but I could see an arched opening, leading underground.  This puzzled me a bit, but after reading the nearby information board and chatting to the lady from Abergavenny Museum, it all became a bit clearer.

This is where Mill Street Tower once stood.  The archway I could see, was the entrance to the cellar.  This dates to the 13th or 14th century and had various uses.  From documents after the death of John Hastings the Younger, in 1389, it is clear that it was used as a prison.  It may also have been used as accommodation or storage for weaponry.

Just to the right of these ruins, is a delightful Victorian garden which is worth a look too 😉

The largest part of Abergavenny Castle still standing, is on the South-West side.  This area used to consist of two Towers, one polygonal and the other circular.  This part of the Castle was built at the same time as the Town Walls and possibly paid for using murage grants.

The best-preserved part of the complex, is the Polygonal Tower.  There was a basement with cobbled floor, used for storage.  Above the basement, was a guard room with doorway onto the Town Wall.  Above this, was a Solar – a private space (bedroom and sitting room) for the Lord of Abergavenny.  This room was obviously much more luxurious and had large windows with spectacular views.  Sadly, not much of this luxury can still be seen – there are some walls and windows, as well as parts of a staircase.  But one can easily imagine the grandeur that once was.

Between the South-West Tower Complex and the Gatehouse, is where the Great Hall once stood.  Only remnants of the foundations can still be seen, along the curtain wall.  Also on site, is a little museum which we regrettably couldn’t explore as time was a bit tight.