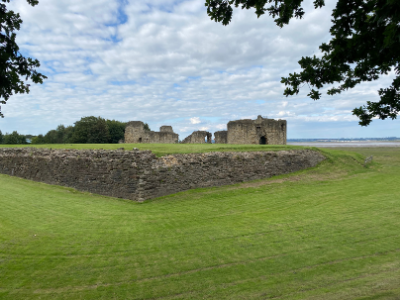 We arrived at Flint Castle late in the afternoon.  The skies were overcast and there was a slight breeze in the air.  From the parking area, we approached the Castle from West and the first thing we saw was a round tower.  From here we could see a curtain wall stretching towards another tower in the North and another curtain wall running at a 90-degree angle from the tower in the other direction.

After walking all the way around the castle, it became clear that it is built in a square with four towers on each corner.

What a wonderful ruin! And built on low ground too – which is quite unexpected.  But then again, from a defensive perspective, it would be very difficult to attack this castle successfully.  Certainly, calvary would be unable to attack from the march side (River Dee), as they’ll get bogged down.  Even foot soldiers would have trouble, I would have thought.  In fact, when we walked around the Castle, in the marshy area, I sank ankle-deep into mud!  (Note to self – wear rubber boots when exploring this castle).

On the other side of the Castle, there was clearly a moat protecting it from the “land” side.  And a drawbridge.  The barrel tower to the right (South side) is totally detached – I wondered why this is.  🤔. It can now be reached via a footbridge from the main building.

Flint Castle was one of the first castles to be built in Wales by King Edward I.  It formed part of his “Iron Ring” – a series or fortresses across North Wales, built to subdue the Welsh people. 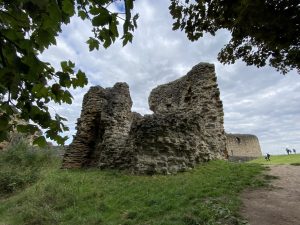 Construction started in 1277 and in April 1278, master mason James of Saint George was appointed to oversee the building work.  He remained on site for 17 months and completed the work at a cost of over £6000 – a rather large sum of money at the time.

Five years later, the Welsh forces (under command of Dafydd ap Gruffydd) besieged Flint Castle but they were rebuffed.  In 1294 they returned under the command of Madog ap Llywelyn.  Battle was fierce and the constable of the castle was forced to set fire to Flint Castle to prevent its capture by the Welsh.

After repairs and partial rebuilding, Flint Castle was again used as a defensive fortress.  During the English Civil War, Flint Castle was held by the Royalists, but they lost it to the Parliamentarians in 1647, after a three-month siege.  There-after, in accordance with Cromwell’s destruction order, Flint Castle was slighted to prevent it from being used in future conflicts.

It has been in ruinous state ever since. 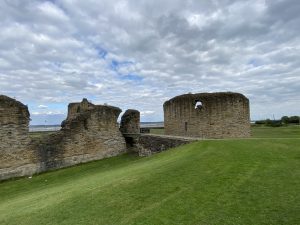 The South Tower being totally separate from the rest of Flint Castle, really puzzled me, as I mentioned earlier.  I have not seen this design before during my castle explorations.  After some research, I found out that Flint Castle’s design is based on Savoyard models, where one of the corner towers is enlarged and isolated.

This detached structure served as both a corner tower and a “donjon” or Keep.  This design was used in France at the time, and it may be that Edward I observed this during his trip in 1270 (en-route to the eighth crusade).  Of course, there is also the possibility that its design was due to the master mason, James of Saint George.  He was influenced by Jean Mesot who worked in Southern France and the two worked together in Savoy.  Either way, Flint Castle was built along the designs of Savoyard models.

And that is what makes Flint Castle unique.  This design was never repeated in any other castle built by Edward I in North Wales – in fact, the layout remains unique within all of Britain.