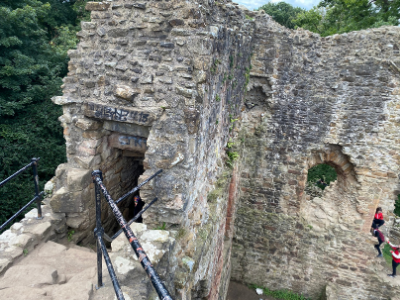 After a long drive from Newcastle, we finally arrived at Ewloe Castle.  Upon arrival, we found that, what seems to be the entire population of Wales, have decided to visit Ewloe Castle!  The parking area was packed!  Anyway, we are here now – might as well continue our exploration. 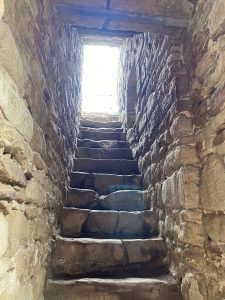 Stone steps inside the Keep

From the parking area, the path to the Castle is rather long and uneven.  I strongly suggest you wear walking shoes and take sufficient water along.  And this castle is really not suitable if you have a physical disability – the path is difficult in places and there are several sets of stairs to negotiate.

But the path is pretty – lots of green trees and a peaceful little stream accompanies one along the walk.  I can imagine, it must be an amazing walk when it is quiet, with less people about.

We arrived at the Castle and I was a little underwhelmed, I must say.  Of course, I knew it was ruinous, but there really is not that much to see.  It seems the Castle had an outer wall and inner Keep.  It looks a bit more like a fortified house than a Castle.

The exact timeframe for the construction of Ewloe Castle is unknown.  There is a distinct lack of records, so we can only work with information gleaned from studies conducted during the early part of the 20th century. 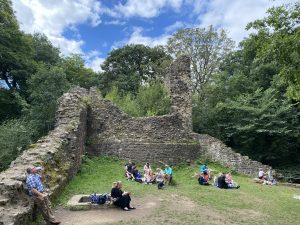 It seems the first part of Ewloe Castle was built after 1210, by Llywelyn ap Iorwerth and later extended by Llywelyn ap Gruffudd (around 60 years later).  It is quite possible that an earlier fortification existed on the site.  The first section incorporates the upper level (inner ward) which has a D-shaped Welsh Keep and curtain walls.  The second part was built on the lower level (outer ward) and comprises a round tower and further curtain walls.

There were no gateways connecting the inner ward and the outer ward, so wooden ramps would have been used to move between the two areas.  Today, there are wood and metal stairs giving access to the upper level, from the lower level.

It seems the Welsh abandoned Ewloe Castle during the First Welsh War (1277), as it is not mentioned in the chronicles.  Edward I used nearby Flint Castle as a base and Ewloe Castle was never used as a military base by the English.

By the late medieval period, Ewloe Castle was in ruins.

Welsh heritage organisation, CADW, manages the Grade I listed building and it is in private ownership since 2009.