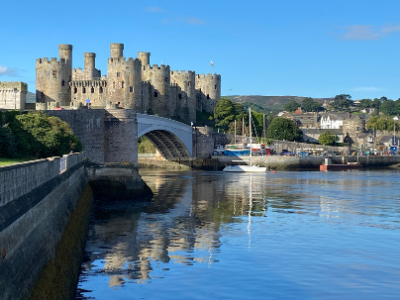 Exiting the North Wales Expressway, onto Conwy Road, our SatNav indicated we were only a few minutes away from our destination – Conwy Castle.  Peering ahead, we were trying to spot the Castle – excitement building.  And then it was there!  Across the River Conwy stood the most magnificent castle I have ever seen.  I slowed the car down as we crossed the bridge, eyes glued to the massive castle towering over us.

“Here’s a place to pull over” my partner said, elatedly.  On the West end of the Bridge, I pulled off the road into a rather large parking space.   (Finding parking near such a well-visited historical site, is near impossible).  We bounded out of the car, excited.  My partner immediately started taking pictures.  I just stood there gawking at the grand sight thinking, this is the most impressive castle I have ever seen. 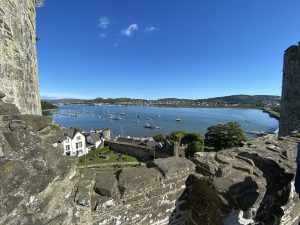 One can immediately see why Conwy Castle was built here.  It stands atop high, solid rock, enveloped on three sides by the River Conwy.  At its foot is a protected harbour which opens out onto the Irish Sea, giving access to the world beyond.

The quaint little town laying in the Castle’s shadow, have not changed that such since medieval times.  Most of the Town Walls are still extant.  Yes, of course it has been modernised, but several old buildings survive, and the size of the town is much the same as it was several hundred years ago.

Now of course, one can enjoy delicious lunches in the town and spend the afternoon shopping in the plenteous interesting shops along the High Street. That is, after one have explored the magnificent castle 😉

I am fascinated by the fact that the castle has 8 towers – unusual for such a relatively small castle.

At the time of its construction it was at the cutting edge of military technology.  Conway Castle boasted high thick walls, towers and turrets providing lethal fields of fire all bonded to a solid rock base. If attacked, the King’s apartments could be defended separately. Well supplied with freshwater and with its own dock, sieges would be nearly impossible. Dramatically coated with a crisp white render, nothing of this scale had been seen before in this landscape. Only the foolhardy or the cunning would ever attempt to capture Conway Castle. But of course, in 1401, exactly that happened!  But we’ll get to that story later 😉

Unlike most castle building projects Conwy Castle was built in one phase only.  On the orders of Edward I, construction started in 1283.  Master Mason James of St George was in charge and used masons, diggers and carpenters from all over England to get the job done in just four years. 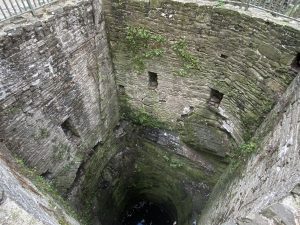 The Water Well at Conwy Castle

James of St George completed the building of Conwy Castle at a total cost of £15 000.  That is around £45 million in today’s money!   Conwy Castle was a symbol of English power in Wales, so Edward I probably thought it was worth the expense.

In 1347, the Great Hall and Royal Apartments were remodelled but the Castle remained mostly as it was originally constructed.  One interesting thing about the castle is that in over 700 years, only three monarchs ever stayed here.  Edward I and Edward II briefly graced Conwy with their presence and in 1399, Richard II took refuse here before being captured at nearby Flint Castle.

And then there was the incident in 1401…

Two “Carpenters” Take Over the Castle

By 1400, the Welsh were again rebelling against English rule.  The English King came down hard on the rebels and (he thought!) nipped the revolt in the bud.  A series of statutes and decrees were issued against the Welsh in March 1401, but this only led to more unrest.

On Good Friday 1 April 1401, two cousins of Glyn Dwr (Gwilym and Rhys ap Tudor) decided to capture Conwy Castle in daring fashion.  They waited patiently for the garrison of Conwy to go to prayer and then struck – with the most cunning plan!  The two Welshmen disguised themselves as carpenters and simply walked into the castle.  Thinking they were merely going about their carpentry business, the two guards did not suspect trouble – until it was too late.  The two guards were killed.

The brothers immediately let their fellow Welshmen into the castle and held it against the English for three months.  A surrender was then negotiated but this brave act served as a rallying cry to their compatriots which led to widespread Welsh rebellion for years to come.

Stepping through the barbican on the West side, I was spellbound by the vast outer ward before me.  The green of the lawn contrasting with the grey of the stone catches the eye.  The first tower I explored was the North-West Tower, immediately to my left.  From here, stairs lead to the Wall Walk from where the most marvellous views can be appreciated.

The cobbled Wall Walk is wide and fairly even (often this is not the case in castles) and still fully functional.  One can walk all the way around the castle, from tower to tower. 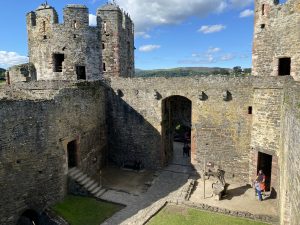 West Barbican at Conwy Castle, viewed from the inside

On the North side, facing the harbour, are four mighty towers; the aforementioned North-West Tower, the Kitchen Tower, Stockhouse Tower and finally the Chapel Tower.  From these towers, guards could survey anyone approaching from the Irish Sea and ward off any attempt to attack.

Stockhouse Tower is so named from the time in the 16th century, when a pair of stocks (foot restraints) were installed here for the housing of prisoners.  Chapel Tower houses (unsurprisingly) the royal chapel on the first floor.  This is a must-see at Conwy Castle – the great, big fireplace is still there, as is the large window in the East wall.

Standing on the Wall Walk on the East side of the castle, one has breath-taking views over the River Conwy and its bridges.  Turning around, looking into the castle, gives a perfect view of the King’s apartments with huge fireplace.

The Southern side of Conwy Castle is protected by four towers, built in perfect symmetry with its North-side companions.  King’s Tower is four storeys high and was used to house important officers of the King’s household.  Bakehouse Tower and Prison Tower follows along the Wall Walk.  The latter has a dark, deep circular-shaped dungeon – not the kind of place one would like to find oneself in, during the Middle Ages!

The last tower I explored – and where I took the stairs down again – is the South-West Tower.  This tower is definitely worth exploring!  It has two large apartments (for the castle garrison) with a fireplace each.  There are also large windows with stone seats and the tower’s own, private latrine.  Quite comfortable, I’d say 😉

Nestled against the South wall of Conwy castle is the bow-shaped Great Hall.  This is truly the largest Great Hall I have ever seen.  It measures at least 5 meters across (by my estimation) and it is very, very long.  The massive fireplace would have provided much needed heating during the cold months.  The original timber roof of the 1280s was replaced in 1346 when eight great stone arches were inserted to support the weight of the new structure. 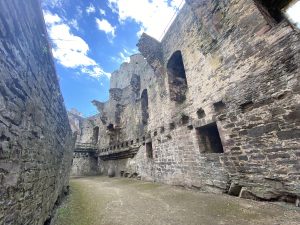 The Great Hall of Conwy Castle

Right next to the Great Hall, is the Chapel.  There are the remains of a three-light window with detailed tracery in the East wall.  This is well worth a look.

Further East is the King’s apartments which includes the Queen’s chamber, King’s chamber, King’s kitchen and the King’s Great Chamber.  In the latter, the monarch would have received guests.  It must have been a very grand room during the Middle Ages.  Even now, the large windows overlooking the river is spectacular.  I can imagine being received here as a guest, seeing the grandeur – and true might – of Conwy Castle.  It must have been an exceptionally striking experience then, as visiting it now still is.

What Not to Miss at Conwy Castle

There is so much to see and explore at Conwy Castle, that it is honestly impossible to highlight only a few things.  However, my personal favourites are: