St David’s is the United Kingdom’s smallest city in population (population of 1841 in 2011).  It is also the resting place of St David, patron saint of Wales.  And the magnificent St David’s Cathedral is located here, on the Northern edge of the city.  So, it is no surprise then that visiting St David’s have been very high on my bucket list.  😉

We drove into town fairly early on a warm Sunday morning.  The thinking was that we may struggle to find parking, so arriving early should make life easier.  And I’m so happy we did!  Parking is a real problem in this city.  There are two large parking areas (pay & display) but these both filled up rather rapidly.

The next mission was finding breakfast.  And that turned into a real issue too!  Most cafes were either still closed or already fully booked.  Eventually we had breakfast at St David’s Cross Hotel, which was absolutely delicious 😋. Fuelled up, we were ready to start exploring.

Walking North towards Porth-Y-Twr on the little cobbled street transported me to the Middle Ages.  All around are old buildings and a feeling of stepping back in time.  Exiting on the North side of Porth-Y-Twr, the view took my breath away.  Down below lies St David’s Cathedral in all its magnificence.  Slightly behind and to the left of the Cathedral, one can see the remains of the Bishop’s Palace.

The size of the Cathedral is impressive.  And seeing it from this elevated position is a real treat (this is the best location for great pictures too).  A small path leads down to the entrance, through the well-kept churchyard.  The many gravestones are worth a look too, before starting the exploration of the Cathedral itself.

One feels small standing in the 12th century Nave.  It is massive.  It is beautiful.  And it feels peaceful. 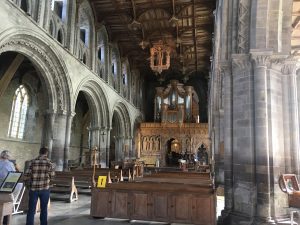 The Nave at St David’s Cathedral

Towering arches on both sides, delicate wooden ceiling and the huge organ pipes on the far side – I drink it all in.  This is the most awe-inspiring cathedral I have ever set foot in.

This is the oldest part of the Cathedral and dates back to 1181.  Gerald of Wales, Archdeacon of Brecon and a cannon of St David’s, along with Bishop Peter de Leia, were given permission to remain in Wales and not go on the Third Crusade, in order to complete the building works.

At that time, the Nave aisles were much lower than they are today.  Only in the 14th century were the side walls raised to accommodate larger windows.  In fact, take a walk over to the South-West corner and look at the wheel window there.  You’ll note the building work looks a bit messy with the window-surround at odd angles.  This is due to the raising of the walls in the 14th century.  Also, at this time, the stone screen separating the Nave from the Quire was built.  All of this work was undertaken by Henry de Gower (Bishop 1328-1347) and his tomb lies within the stone screen.

Just look at the floor!  The chessboard style designs are stunning down the main aisle, with a more flowery design along the sides.  And then look up at the ceiling of the tower lantern.  The detail is amazing.  It looks almost too delicate to be a ceiling, with fine “ribs” meeting in the centre and several coats of arms depicted. 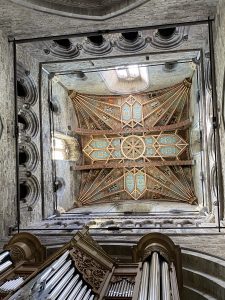 Ceiling in the Quire

The choir stalls are unusual and warrants a proper exploration.  These were constructed in the late 15th and early 16th centuries and the original coats of arms survive in six stalls.  The carvings on the bench ends are beautifully detailed, as are the misericords.  I spent quite some time examining the (sometimes) funny carvings under these tip-up seats!  😃

But there is another reason why the Quire at St David’s is unusual.  Clergy seating here is different from that in other cathedrals:  The Dean sits on the North side, where the Precentor would normally sit.  Also, the Bishop has a stall in the quire where the Dean should be.  And, here’s the most unusual part, there is a stall for the reigning sovereign!  HM Queen Elizabeth II has sat here four times (1955, 1982, 1995 and 2001).

The South Side of St David’s Cathedral

Looking into the Chapel of St Edward the Confessor

Just past the Quire is an exquisite area with the Shrine to St David.  He died in 589 and the monastery is said to have been “filled with angels as Christ received his soul”.  In the 12th century Pope Calixtus II declared St David’s a place for pilgrimage and thousands of people flocked here to pray, ask for divine help and do penance for wrongdoing.  Of course, all of this was destroyed in 1538 during the Dissolution of the Monasteries, but thankfully this awe-inspiring Shrine has been restored to its full glory in 2012.

Turning right, we entered the Southern part of St David’s Cathedral.  Most of the building work here dates from the 14th century and includes the South Quire Aisle, South Transept, South Chapel Aisle and the Chapel of St Edward the Confessor.  There are several tombs and effigies here to see, including one to Gerald of Wales who played such an important role in the construction of this glorious cathedral.

The Magnificent Presbytery of St David’s

This is possibly the most beautiful part of the Cathedral, but it is also the most confusing with regards to build styles.  Work was done here in various different centuries, evidence of which is plentiful.  There are supporting piers which are round, while others are octagonal.  And of course, none of them match the arcades.  Even the floor tiles come from different times – those by the altar being 16th century while those nearer the shrine are 19th century.

But the ceiling is incredible!  Lots of squares within squares and full of colour – a delight for the eye.  And that colour works through in the glass windows of the four lancets above the altar.

Looking at the North Side of St David’s Cathedral 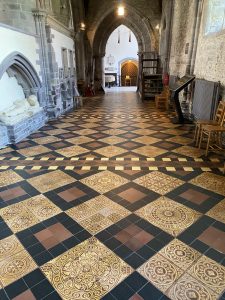 Sadly, at the time of our visit, we were unable to see the Holy Trinity Chapel and the Lady Chapel.  These were closed but we could peak in and it does look very interesting.  But never mind – there is so much to see and appreciate here that missing out on these two areas is not too devastating.

In 1844, architect William Butterfield inserted a large Perpendicular-style window in the North Transept which is well worth a look.

An arched doorway allows access from the North Transept to the Treasury.  Here is a fine display of important discoveries from graves of early bishops, wonderfully embroidered altar frontals and stone figureheads.  It is basically a museum-style showcase of the history of St David’s.

The Cloisters is the site of a “college” of clerics, founded in 1365 and dissolved in 1549.  Sadly, it became quite ruinous by 1700 but was restored in the 21st century.  It now houses a lovely restaurant and crafts shop.

What not to Miss at St David’s Cathedral

This historical site has so much to offer with so many unusual features that I highly recommend you allow several hours for your visit.  To highlight a few things not to miss: