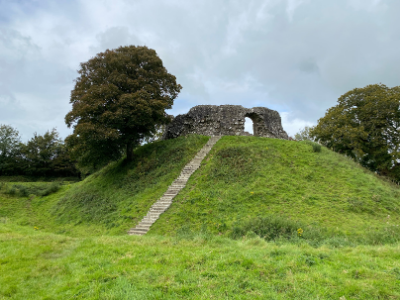 As Wiston Castle is only 7 Miles from Haverfordwest where we stayed over, we knew it would be ridiculous not to stop there to explore.  So off we went and arrived early in the morning.  Parking was easy, right across the road from the castle, in front of St Mary Magdalene Church.

It was very quiet with absolutely no-one else in sight, which made exploring really easy (apart from the 75 steps one has to walk up to reach the top of the mound!)

The Founding of Wiston Castle

In 1108 Flanders, the lands of Henry I’s mother, suffered catastrophic flooding, and many refugees sought help from Henry. The English King settled them in his newly acquired lordship, particularly Roose (aka Haverford) and Dungleddy.

This area used to belong to Arnulf de Montgomery (who was in revolt against Henry).  Henry I then gave this land to Wizo, one of the Flemish leaders.  The latter founded a settlement here, called Wiston (Old Flemish/Saxon for Wizo’s enclosure/town)

Wiston is one of the best-preserved motte and bailey earth work castles in Wales. 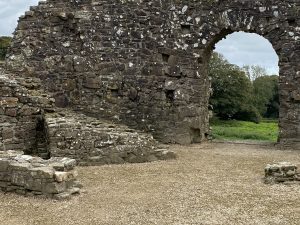 The Castle, church and borough were established here by 1112. The Castle was founded on an earlier Iron Age enclosure. The motte (mound) was built over the prehistoric bank and the large surrounding bailey contained the early town borough. The defences were initially all of timber with a tower stronghold upon the motte. Lying on the shifting Welsh/Norman frontier of the Landsker line, Wiston was captured by the Welsh in 1147, 1193 and destroyed in 1220, but each time the occupation was short lived.

After 1220 King Henry III ordered William Marshall the younger to rebuild the defences the – stone “shell keep” on the motte is probably his work. During the later 13th century the borough was recited outside the Castle.

This high earth motte was the final stronghold against Welsh attack. Wizo’s original 12th century keep would have been a timber tower within a palisade. The present 16-sided stone “shell keep” was an early 13th century replacement; it would have risen another storey with a parapet. The entrance was barred by a stout wooden door whose hinge points and drawbar sockets still survive. The main residential upper floor was reached by stone steps just inside the doorway.

By the end of the 13th century, Wiston Castle was abandoned after it’s owner Sir John Wogan moved to Picton Castle.

During the English Civil War in 1643, the Royalists established a small outpost at Wiston. Even this was then abandoned, without an engagement taking place, when (during the following year) parliamentary troops advanced into the area, led by Major-General Rowland Laugharne.

The Castle is now being cared for by CADW and is a Grade I listed building.

What can Still be Seen Today

Wiston Castle is rather ruinous, but several parts of the old walls still stand. 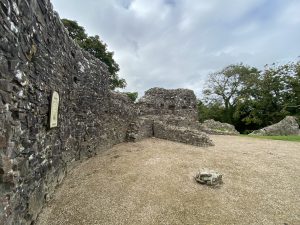 Ruins of the Keep at Wiston Castle, Wales

The motte stands approximately 9m above the bottom of the deep encircling ditch and is 18m in diameter at its summit. Stone steps leads up from the ditch to the top.  An arched entrance on the south side provides access to the Castle (note here that on either side of this there are draw-bar holes which would have been used to secure the main gate).