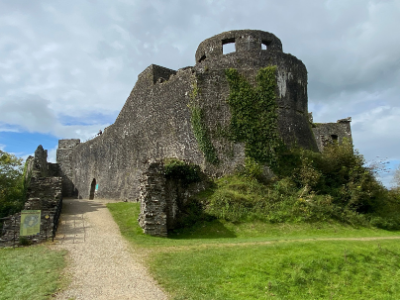 It was hot – very hot!  So, you can imagine my delight when we found a parking space under a large tree, in the National Trust parking area at Dinefwr Park.  And it was green all around us!  The park is absolutely stunning, and I stood in awe scanning 360 degrees around us.

We came to explore Dinefwr Castle, but this parkland is an awesome bonus 😁.

Following the little signs, we set off for the Castle.  We were told by CADW staff that it is a 20-minute walk from the parking area to Dinefwr Castle, but I can tell you it took much longer!  Maybe I am just really unfit, or the heat of the day played a part, but climbing that hill took all my energy.  After a much-needed rest, we continued on, through a beautiful forest area, to the entrance of the Castle.  And what a spectacular sight it is!  Well worth that long walk up the hill 😉 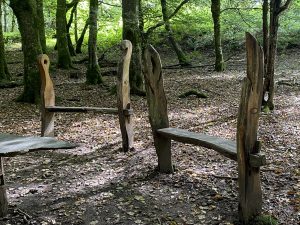 Approaching from the East, we walked along a long, narrow entrance passage with a high wall on our left and the Castle on our right.  The entrance is at the far end of this passage, providing even further protection during times of attack.  I can imagine soldiers trying to storm the entrance during the Middle Ages.  It would have created a bottleneck where the attackers would have been terribly vulnerable from missiles being thrown from the Castle walls.  Very clever design, in my humble opinion 😉

Through the entrance, one steps into the inner ward.  On the right are stone steps leading up to the Wall Walk and large, round Tower.  Dead ahead, is a square structure built into the curtain wall and a smaller Tower sits on the North side of the Castle.

All the curtain walls are mostly intact, and the towers still stand to a substantial height, so there is much to explore.  And the views from the Wall Walk is breath-taking!  One can see for miles down the Twyi valley.  It is easy to understand why this location was chosen for a Castle – it sits high on a rocky crag with clear views in all directions.  There is no way Dinefwr Castle can be subjected to a surprise attack.

The Kingdom of Deheubarth

Legend says a castle was first built here by Rhodri the Great but there is no archaeological remains to prove that. 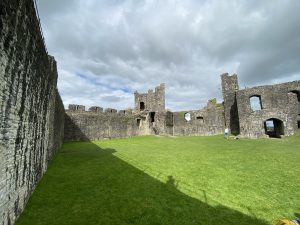 Dinefwr later became the main seat for Rhodri’s grandson, Hywel Dda who was the first ruler of Deheubarth (and later King of most of Wales).  It is believed that Rhys ap Grufffydd (ruler of Deheabarth from 1155 until 1197) built Dinefwr Castle.

Troubles arose upon the death of Rhys ap Gruffydd as his sons contested the succession to the kingdom of Deheubarth.  Rhys probably wanted his eldest legitimate son, Gruffydd ap Rhys to take over from him, but two other sons had different ideas.  Fights between the brothers meant several castles were captured and then recaptured for a number of years after Rhys’s death.

It was this struggle for power that ultimately led to the fall of the Kingdom of Deheubarth.  In the end, Llywelyn ab Iorwerth, the Prince of Gwynedd had to negotiate a tripartite agreement which saw Deheubarth divided into three separate sectors, ruled by three separate rulers.

In 1277, Dinefwr Castle was captured by the English King Edward I and has remained in the hands of the crown thereafter.

After 1277, repairs we carried out at Dinefwr Castle.  The Tower, bridge, hall and “little tower” were all repaired, and a new gate was built.  At this time, the ditches were also cleaned and extended. 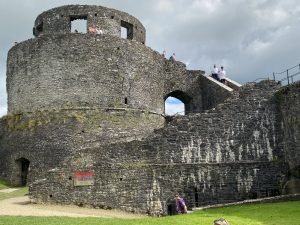 The Round Tower at Dinefwr Castle

It is also believed that the large rectangular chamber block on the North-East wall was constructed during this time.  This may have served as a hall and apartments until a new Hall was built on the West side.

In 1326, further repairs and remodelling took place, with the new Hall being constructed.  However, it seems very few repairs were done after this date.  There are records reporting the poor state of the Castle, such as a report from 1353 stating the Great Keep is “on the verge of collapse”.

By the 15th century, Dinefwr Castle was abandoned.

Conserving Dinefwr Castle for the Future

The Castle is now partially owned by the Wildlife Trust of South and West Wales.  CADW manages the site but of course, the Castle is located inside Dinefwr Park, which belongs to National Trust.

All these organisations are working together to conserve the site.