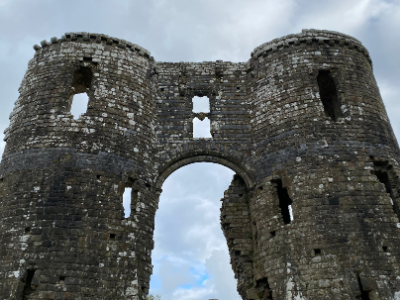 We’ve taken a little country road off the busy A40 to see a castle that is not really a castle.  Llawhaden Castle in Pembrokeshire, Wales is in fact a fortified mansion, but it looks very much like a castle – which makes it even more intriguing.

The day was grey and sadly, the gates to the castle were locked (it looked like some conservation works were being undertaken), but we could still explore from the outside.  In fact, a really great view of the castle can be found by walking up the little alley between the houses and the castle, along the West walls.  😉

Land of the Bishops 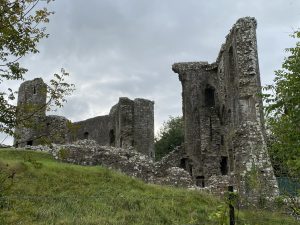 Llawhaden Castle viewed from the West

The town of Llawhaden and the surrounding area, were owned by the Bishopric of the Diocese of St David since the time of the realm of Deheubarth.  These lands became part of the Marcher Lordship of Dewisland, after the Norman conquest.  It was still however ruled by the Bishops.  In fact, this was the only ecclesiastically ruled Marcher Lordship.

The first Norman Bishop, Bernard, built a castle here in Llawhaden in 1115.  This first version of the castle was a motte-and-bailey structure.

Between 1362 and 1389, a stone structure was built under the direction of Bishop Adam de Houghton.  This included two suites of residences and curtain walls.  The grand Gate House was only added much later.

The building sadly fell into disrepair in the early 16th century, while under the control of Bishop William Barlow.  He was an ardent Church Reformist who did not support St David’s and its traditions.  He stripped the lead from the roof which resulted in catastrophic damage to the building over the following years.  After the dissolution of the monasteries, Llawhaden Castle was abandoned.

Llawhaden Castle in the 20th Century

George Lansbury (First Commissioner of Works in the Parliament of the UK) started a renovation project in 1930.  During these works, the ditches were cleared, and undergrowth cut back.

The site is now privately owned by the Lord of the Manor of Llawhaden and managed by Cadw.