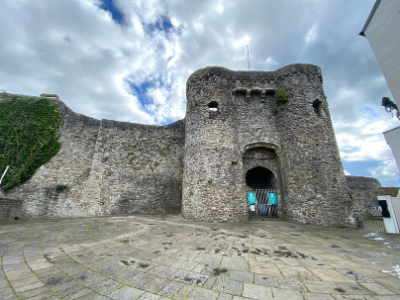 Our visit to Carmarthen Castle in Wales resulted in frustration and disappointment in equal measures.  But I’m glad we stopped in the town, if only to gain the knowledge that the castle is not really worth a visit! 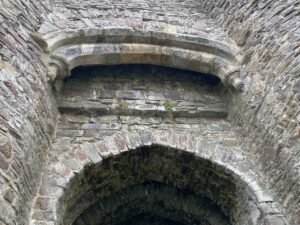 Detail above the Gatehouse

Firstly, parking was a near impossibility.  SatNav guided us to Little Bridge Street, which is close to the castle.  But it is a terribly narrow street ending in an even narrower street, and since we were travelling in a rather large vehicle, this was a real problem.  We managed to squeeze in between two other cars and walked up the little cobbled street to the Castle entrance.  Only to find that it is closed! 😫. A few pictures later, we walked back to where we parked and then had to struggle our way out again (no space to turn around so we had to reverse all the way down the road!).

This is possibly a record for the least amount of time I have ever spent exploring a castle.  I doubt if we were there more than five minutes 😱.

It is believed that a motte and bailey castle was built on this site, at some point between 1104 and 1109.  Later in the 12th century, the castle was rebuilt in stone.

Around 1116, Gruffydd ap Rhys launched a successful night attack on Carmarthen Castle, capturing and then dismantling the structure.  Over the next few decades, the site changed hands often – and was as often destroyed and rebuilt.

Carmarthen Castle During the Wars of the Roses

Edmund Tudor (father of Henry VII, the first Tudor king of England) took possession of the Castle during the Wars of the Roses.  He supported the House of Lancaster and held the Castle against William Herbert, a Yorkist.

Sadly, for Edmund, the Yorkist troops captured the Castle in August 1456, imprisoning Edmund.  He died in captivity, at Carmarthen Castle on 1 November 1456.

An old gaol was in use in the Inner Bailey of the Castle for most of the Castle’s existence.  In 1789, this small gaol was converted into a new County Gaol with large extensions being added over the next several years. This gaol was in service until 1936 when it was demolished.

Carmarthenshire Council bought the Old Gaol in 1925.  A new chateau-style County Hall was built on the site in 1938.

The remains of Carmarthen Castle is a Grade I listed building, since 1954.  It currently houses the town’s Tourist Information Centre.