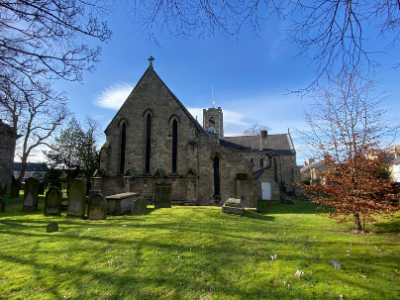 Corbridge is a perfect destination for a daytrip when you want to go exploring in Northumberland.  The little town offers delightful shops, cafes and of course remarkable historic architecture.  And it is exactly this deep history that drew me to Corbridge on a sunny Sunday in February.

We parked on Hill Street, directly behind St Andrew’s Church.  From here, we could easily explore the town centre which has sprung up around the Town Square.  The beautiful, medieval St Andrew’s Church also looks onto the square.  Pevsner describes this church as “the most important surviving Saxon monument in Northumberland, except for Hexham crypt”.  I just had to explore it! 😁 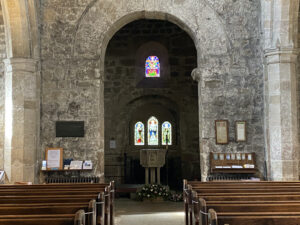 Saxon window in the base of the tower

St Wilfred of Hexham Abbey decided that a church and monastery are needed in the town of Corbridge.  He sent his monks to start the building project in 674.  At this point in time, the church was constructed in wood only.  This was rebuilt in stone, in 786.  A square tower on the West side was built, with a long, narrow nave.

In 919, the Danes invaded the area resulting in partial destruction of St Andrew’s Church.  It remained in this sad state until the Normans arrived in the 11th century.  They set about rebuilding the church and adding extensions too.  They raised the Tower and added North and South Transepts.

Corbridge and St Andrew’s Church suffered terribly during the Scottish raids of the 13th century.  The town and church were often burnt during these attacks.  And the Black Death of 1349 did nothing to help the suffering inhabitants either.  There was very little money to repair the church.  Only in 1767 did any major works again take place at St Andrew’s.  At this time, the upper part of the Bell Tower was replaced, and large windows added.

What not to Miss at St Andrew’s Church

The Saxon Tower is truly remarkable.  This was originally the main entrance to the church and the blocked doorway can still be seen on the West wall (there are now three tiny stained-glass windows).  Looking up, one can see a wonderful Saxon window. 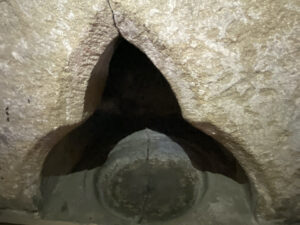 Piscina in the South Wall

In the Lady Chapel are perfect examples of 13th century Lancet windows to be seen.

The tall round-topped arch in the Nave (leading into the base of the Tower) was built from Roman stones from the nearby Roman fort.

We also spotted (purely by chance, as it is quite hidden away) a wonderful piscina near the corner in the South Wall.

Outside, on the buttress of the South Transept, is a sundial dating from 1694.