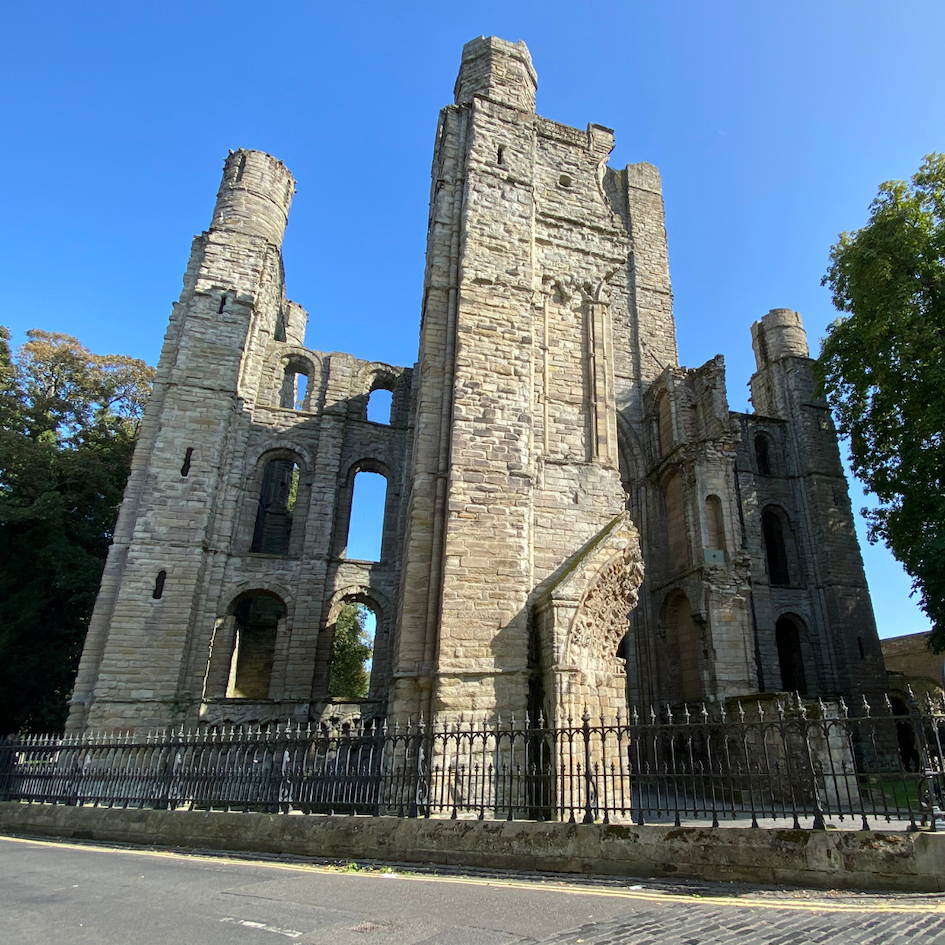 The impressive ruins of Kelso Abbey’s West tower are all that survive of one of Scotland’s richest medieval Abbeys.  It was built to a twin-towered, double-crossed plan unparalleled in the rest of the Kingdom.

We were walking from the centre of town, along the A699, following the signs to the Abbey.  Reaching the intersection with Abbey Row, the sight of the massive tower took my breath away.  It is truly awesome.  The incredibly high arched entrance makes one feel rather small and the detailed carvings around the arch is spectacular. 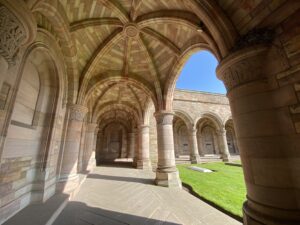 Kelso Abbey was founded at Roxburgh on 3 May 1128 by a community of monks of the Tironesian order.  King David’s decision to site the Abbey close to the border with England was in part to show his neighbour how sophisticated his Kingdom had become. But it also put the Abbey on the frontline in the struggles between the kingdoms. As the largest of the border Abbeys, Kelso suffered greatly.

Following the founding of Kelso Abbey, it grew quickly to become one of the wealthiest and grandest Abbeys in Scotland.  It dominated the border region and served as unofficial “southern capital” for the Scottish royal family.

However, as mentioned earlier, its proximity to the English border placed it on the frontline during times of war (which was very regularly at that time!).  The area, Abbey included, changed hands often between Scottish and English rulers.  Every time the English took control and damaged the Abbey, the Scottish monks would perform repairs afterwards.  But of course, this was unsustainable. 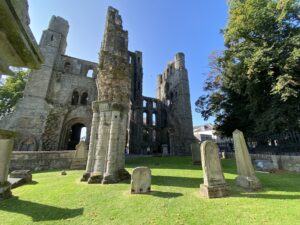 Kelso Abbey viewed from the East

In 1545, an English army, led by the Earl of Hertford systematically demolished the Abbey. Two years later, Hertford returned to find just 16 monks and laymen left to defend the surviving West tower.

This physical assault was followed in 1560 by monastic disestablishment under the Scottish Reformation, from which time the Tironensian community at Kelso was no longer officially recognised.  A small remaining contingent of monks may have continued at the site for a number of years following the 1560 dissolution, but after further attacks and damage the abbey was declared officially derelict in 1587.

This however, remained a sacred place. The people of Kelso buried their dead here and continued to use the West End as their parish church, even as the rest of the Abbey was stripped of its stone. In the 1640s they built a rough masonry church within the ruins, which also housed a goal, stable and timber store. All of this were removed in 1816. The Roxburghe Memorial Cloister was built in 1933. 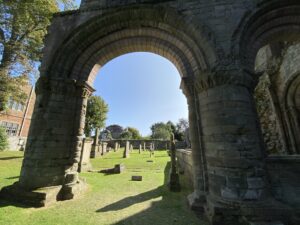 A beautiful arch at Kelso Abbey

Kelso Abbey in Scotland was a massive complex in its heyday. It had the Abbey church, the Cloister, the Chapter house, the Refectory, the Infirmary and then the West Tower.  Parts of the West Tower is still standing but is clearly ruinous. Sadly, most of the Abbey church and the rest of the buildings have disappeared over the centuries.

There are still substantial footings, or foundations, to be seen throughout the complex.  To the East of the structure, there are also several old gravestones in good condition.

The 1930’s Roxburghe Memorial Cloister is beautifully designed and houses many graves of the Dukes of Roxburghe and their families.  It was built in memory of the 8th Duke of Roxburghe and incorporates a 13thcentury doorway, possibly from the old Chapter House.

What Not to Miss at Kelso Abbey, Scotland