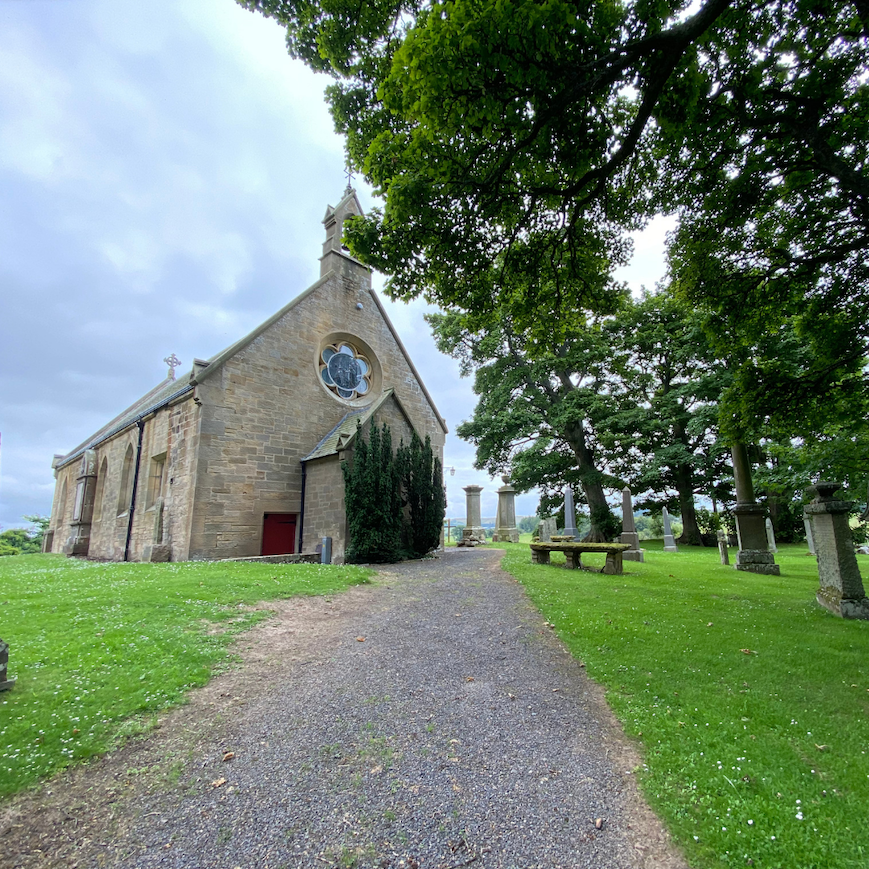 As is often the case when exploring, we stumbled across the little parish church of Fala and Soutra purely by chance.  After looking around the site of Soutra Aisle, we were on our way home on the A68 when I spotted the church spire off to the right.  We decided that there was enough time left in the day for one more exploration, so we turned into the village of Fala.

The parish church of Fala and Soutra is located on a slight hill with breathtaking views over farmland and more hills in the distance.  All around the church are massive trees, which makes one feel isolated in a peaceful bubble, even though the busy A68 is nearby.

Fala Kirk is mentioned in the ancient taxation of 1137, so we know a church was in existence here as far back as at least the 12th century.  At that point, Fala church was under the diocese of St Cuthbert.  From that time until the 19th century, the patronage of Fala lay with the Lord of the Manor or principal laird of the parish. 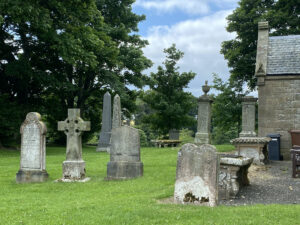 Churchyard at Fala and Soutra Church

Early records indicate that Sir Edward Hay was granted the lands around Fala in the early 15th century.  A century later, the Edmonstouns became Lords of the Manor.  Then, in 1542, King James V granted these lands to the Sinclairs of Roslyn.  It is unclear, though, exactly why this change was made, but it is believed that Sir William Sinclair was known for land-grabbing.

The Sinclair ownership did not last long, though.  In 1597, the lands of Fala were returned to David Edmonstoun.

In 1618, the parishes of Fala and Soutra merged, and the congregation used Fala church as their place of worship.

A New Church at Fala and Soutra

In 1700, much of the church was rebuilt on its original foundations.  Again, in 1863, architect David Bryce reworked parts of the church, adding porches and the belfry.