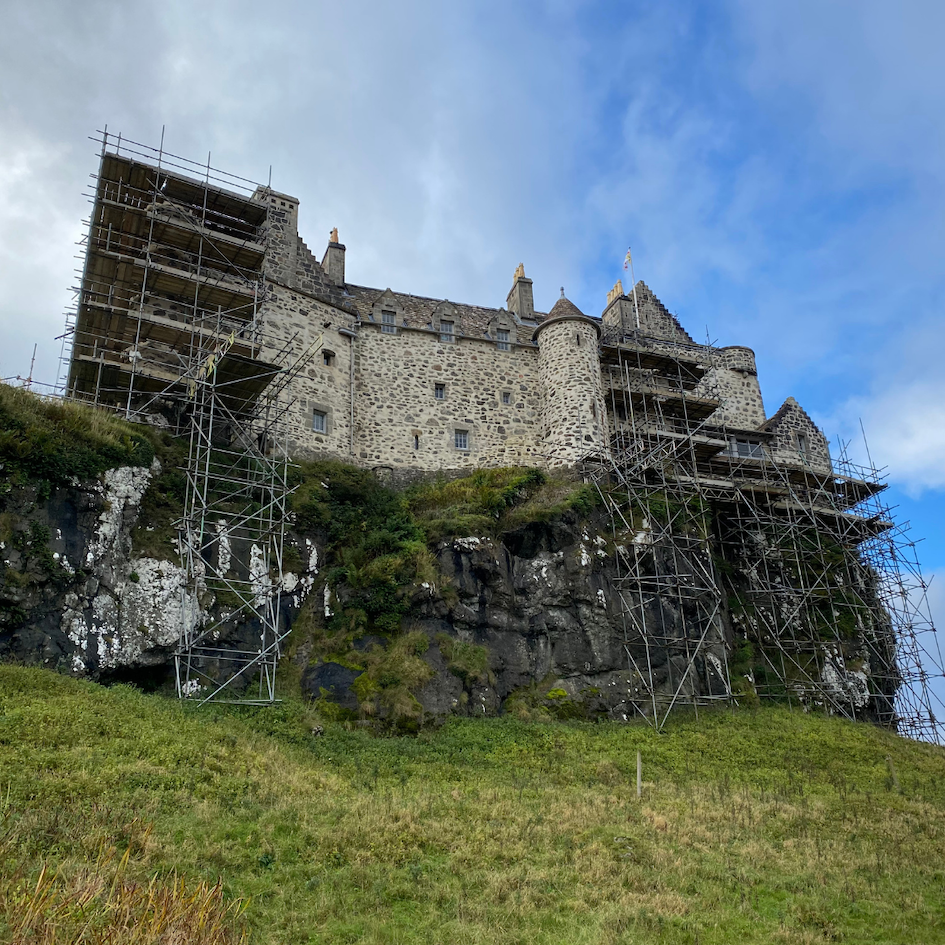 Powerful, dominant, and intimidating.  These are the words that spring to my mind seeing the castle fortress of Duart on the Isle of Mull for the first time.  Sailing to Craignure on Mull, from Oban on the mainland, Duart Castle stands prominently on a high crag at the end of a peninsula, jutting out into the Sound of Mull.  There is no way any ship can sail these waters without being spotted from the Castle – which is precisely why this exact location was chosen for building a Castle in the first place.

Fighting off the Viking Raiders

Norse and Viking raiders made constant forays to the Western Isles and Highlands from as early as 793. Controlling the Sound of Mull was vital; spotting invading forces early meant the locals could ready themselves for the attack.

The Lord of the Isles understood the value of having castles in strategic locations, so he worked with the west coast chiefs in a loose alliance to build eight castles on each side of the Sound, all within sight of their neighbours.  In this way, a beacon signal could be transmitted from Mingary Castle on Ardnamurchan Point via six others (Duart being one of them) to Dunollie Castle, close to Oban on the Firth of Lorne.

The clan name Maclean means “Son of Gillean”, and it takes this from a thirteenth-century warrior, Gillean of the Battle-Axe.  He was related to the kings of ancient Dalriada. 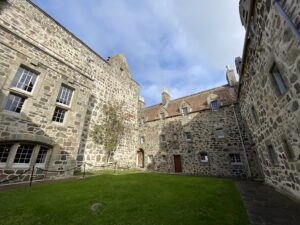 In 1367, Chief Lachlan Lubanach Maclean received papal permission to marry the daughter of the Lord of the Isles, Mary Macdonald.  Her father was, however, not that keen on the union.  Lachlan then kidnapped Mary (an incident in which the Chief of the Mackinnons was killed).  Mary’s father relented and allowed Lachlan to marry his daughter.

One wonders a bit about the motivation behind the kidnapping.  It is said that Lachlan loved Mary, but I have my doubts – at least, I don’t think the love for Mary was his only driving force.  Interestingly, the Chief of the Mackinnons happened to die during the kidnapping.  Due to this, the Macdonalds took Mackinnon land (large parts of the Isle of Mull) and gave it to Lachlan Maclean as dowry.  So, Lachlan gained considerable financial resources by marrying Mary Macdonald.

Whatever the truth is, the Macleans now owned much of Mull and Lachlan built the Keep that we can still see today.  The first mention of Duart is in records dating from 1390, so we know the Keep is older than that.

It is a formidable structure.  On the landward side, where it is more vulnerable, the walls are 9 meters high and 3 meters thick.  A deep ditch was cut from solid rock beyond the walls as an outer defence.  The walls facing the sea are less thick – ranging from 1.8 meters to 2.4 meters – but still immensely strong.

Hector Odhar Maclean of Duart was a supporter of King James IV of Scotland.  He fought and died for King James at the Battle of Flodden against the English in 1513.  During this period, the Macleans and Campbells (of Argyll) were allies.  In fact, their ties were strengthened through marriage; Lachlan Maclean of Duart took Catherine Campbell as his second wife.  Sadly, this didn’t work out so well for either of them.  She failed to produce an heir for him, so he tried to kill her by abandoning her on a rock by the sea, hoping the incoming tide would drown her.  Thankfully, some passing fishermen rescued her and took her to her brother.  Campbell swore revenge, and in 1523 Lachlan was stabbed to death while visiting Edinburgh. 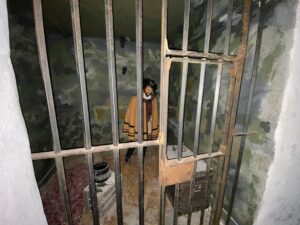 Another alliance was ended when Sir Lachlan Mor Maclean started a feud with the Macdonalds.  Both clans wanted control over the sea route to Ulster.  Maclean persuaded Elizabeth I of England to back him, but he subsequently died in 1598.  This feud weakened both clans – an opportunity the Campbells quickly seized.  The Campbells were influential in the Stuart Court and informed King James VI of Lachlan’s dealings with the English Queen.  The King was furious and sequestered Duart Castle in 1604.  Four years later, the Macleans, along with other clans, were forced to agree to the terms of the Statutes of Iona, under which they lost most of their sovereignty over the islands.

The Macleans were allowed to retain Duart, and they worked hard to show support to the Crown for the next several decades.  Sir Hector Ruadh Maclean fought for the King during the Cromwellian war and was killed at Inverkeithing in 1651.  This war, like all others, costs vast amounts of money.  The Macleans went into debt during the war, mortgaging most of their lands.  The Campbells were again quick to seize the opportunity to get back at the Macleans.  They bought all the Maclean debts and thus acquired almost all the Macleans’ lands.  Duart was held for a short while but was eventually surrendered to the Earl of Argyll in 1674.

The Fall and Rise of Duart Castle

After Duart was taken over by the Campbells, it became more and more ruinous.  Government troops were garrisoned there until 1751, but then it was abandoned and left to the elements.

The Macleans, however, continued to distinguish themselves on the military front.  Sir Allan Maclean fought in the Netherlands, Scotland, and America until he died in 1783.  Successive Maclean chiefs excelled as military commanders, and in 1911, Colonel Sir Fitzroy Maclean (26th Chief of Clan Maclean) managed to buy back Duart and a tiny bit of land around it.  It was a total ruin at this point in time.

Sir Fitzroy engaged the Scottish architect Sir John Burnet to restore the Castle and once again bring it into a liveable state.

The present Clan Chief, Sir Lachlan Maclean (28th Chief), lives in Duart and is working on another restoration project.  This is a £1.2 project to repoint chimneys and walls and repair water damage – a project to save Duart once again for future generations.

Exploring Duart Castle on the Isle of Mull

A large arched entranceway leads to a courtyard.  Above the arch is the beautifully carved Coat of Arms of Lord Maclean, and to the left of the courtyard, a Rowan tree stands.  This tree was apparently planted to ward off evil spirits, but it just looked wonderfully inviting to me.

Stepping into the Castle, one feels a coolness.  The heat from outside certainly doesn’t penetrate through the thick walls.  On the ground floor are the kitchen, pantry, 4.8 meters deep well, and the dark dungeon.

Up a steep set of stone stairs, one finds the breathtaking Sea Room.  This room was added during the 1912 restoration and offers magnificent views over the Sound of Mull and Loch Linnhe.  I was told by Sir Lachlan Maclean (28th Chief) that one can see Ben Nevis from here on a clear day.  Sir Lachlan then showed us into the Great Hall where massive family portraits adorn the walls – portraits covering more than three centuries of Macleans, from Sir John Maclean, who died in 1716, to the present day.

From here, we climbed up another set of turnpike stairs to explore the Dressing Room and State Bedroom. These rooms are in the style in which it was made for the wartime honeymoon of Lord Maclean and his bride.

Continuing our climb upwards, we reached the very top of the Keep.  This floor used to house three bedrooms and a bathroom, but this was removed to create one ample space.  This space is now being used as an exhibition area where the history of Clan Maclean can be studied.  A small door provides access to the roof from where a 360-degree view can be enjoyed – over the sea and all around the landward side of the Castle.

After saying goodbye to Sir Lachlan, we ventured out of Duart Castle, down the slight slope to the delightful Duart tearoom.  A cup of tea and fresh carrot cake is a must after exploring such a massive piece of Scottish history.