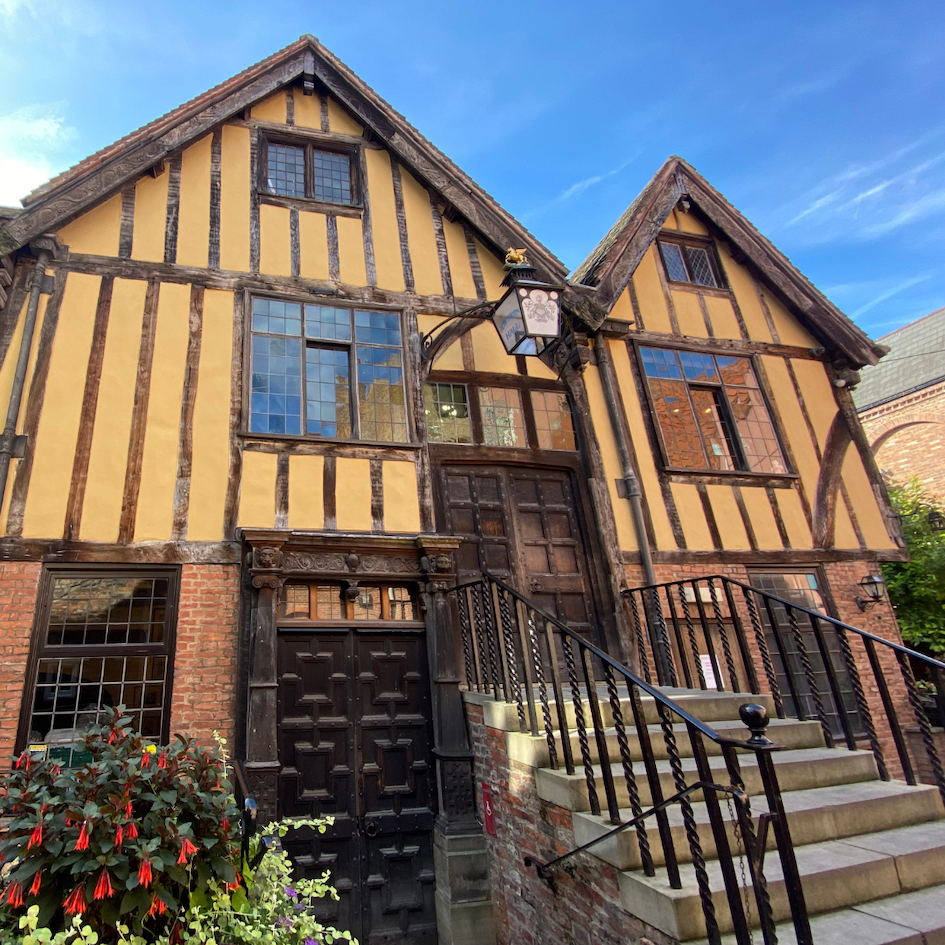 “Where are you looking to go, Pet?” asked one of the men sitting on a low wall in Whip-Ma-Whop-Ma-Gate Street.  We clearly looked like lost tourists!  We weren’t quite lost – we were just unsure of which direction to go (I am well known for getting turned around even in my home city 🤣).  Anyway, these two outgoing Yorkshire gentlemen, clearly retired and with much time on their hands, were very friendly and eager to help.  They pointed us in the direction of the church we were searching for but then also mentioned an old, medieval Guild Hall just down the road.  “You’ll want to see that, Pet,” the shorter of the two said, “that is proper York history.”

And so, off we went to find the Merchant Adventurers’ Hall – and our new friend was right – this is proper York history.

Down a tiny alley, off Fossgate, we found the Hall.  It is a magnificent structure indeed!  The lower part is brick, with the upper floor rendered in a yellowy-tan colour, with exposed timberwork.  Two massive wooden doors lead to the ground and first floor, respectively. 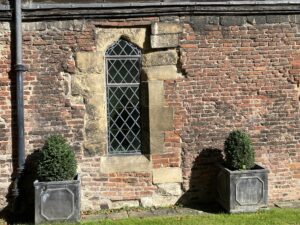 A window at the Merchant Adventurer’s Hall

Just as we arrived, a lady started moving the advertising signs indoors.  It looked like they were closing!  Oh no!  I desperately want to see the interior.  But sadly, that was not to be.  The venue was being used for a wedding reception that afternoon and was thus closed to the public.  So, I had to settle for viewing the exterior only (note so self:  when in York again, go see the interior).

Walking around the North and West sides of the Merchant Hall, we found a little café and a delightful garden. The west wall has a few ancient windows, which have clearly survived many renovations and changes over the centuries.

What Exactly are Merchant Adventurers?

The Merchant Adventurers’ Hall in York is a Grade I Listed building and Scheduled Ancient Monument. It was built between 1357 and 1361, before most of the craft or trade guild halls in Britain, making it one of the most significant buildings of its kind and date in Britain.

Apart from this original function, the Hall also houses a museum, café, and event venue space.