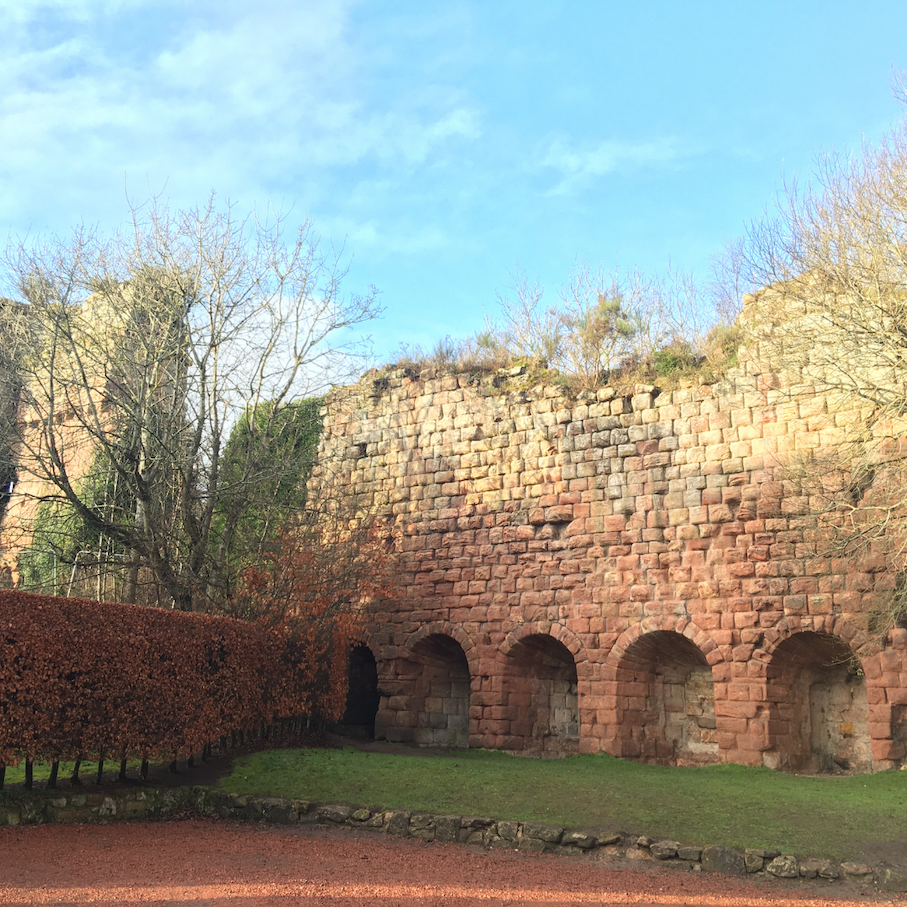 The hill is terribly steep and slippery after two days of solid rain.  Squishing my way through the mud and wet leaves, I finally reach the midway point, and to my right are the beautiful ruins of Roslin Castle.  And the slog was so worth it!

A stone bridge takes me across a very deep ditch to what was once the majestic North range.  In the gravel-covered courtyard, I stop to take a 360-degree look at the place.

Roslin Castle (sometimes spelled Rosslyn) was built high up on a steep wooded promontory with the River North Esk on three sides.  Massive trees and other vegetation almost totally obscure the castle from any direction.  In fact, I only really saw the structure when I was less than 100 meters away.  Reaching the castle is not that easy – the stone bridge on the north side is the only real access.  On the other three sides, sheer cliffs drop down through the trees to the river. 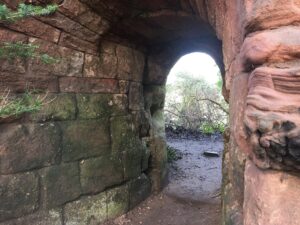 Arched opening in the west range at Roslin Castle

Very little remains of the Gatehouse and North Range.  Only a few bits of a wall – still standing to quite a height – is still extant.  To the west is a large section of 15th-century curtain wall with several arches.  These used to be openings, with one serving as a postern gate.  All bar one of the arches are now bricked up, but the remaining opening leads to the outer part of the castle.

A note of caution here:  the ledge on the outer part of Roslin castle (on the west side) is very narrow and slippery.  Exploring this outer wall is definitely worth it, but do be careful.  The drop down there is a good 15 or 20 meters!

The East Range is the most intact part of the castle ruin.  The top two floors (reached from the courtyard) are still habitable and are currently let out as a holiday let.  I could not see the interior as it was occupied at the time.

Climbing down the western side and walking around the southern edge of the cliff, I reached the bottom of the East Range.  Here, from the bottom looking up, the full splendour of the castle becomes apparent.  The East Range is a full five storeys high (even though one can only see two levels from the top).  The inhabited two storeys have large windows, but the bottom floors all have tiny bricked-up or barred windows.

Making my way further through the mud, I went all the way around the castle to reach the underneath of the stone bridge (which earlier led me to the castle).  The arch underneath the bridge is massive!  Looking up, it was clear to me that accessing the castle without crossing that bridge would have been impossible in the castle’s heyday.

The Rosslyn estate has been held by the St. Clair family since the Barony of Rosslyn was established in 1070.  There has been a castle on this site since the early 14th century when the Sinclair (or St Clair) family fortified the site.

In 1452, Roslin Castle was damaged by a domestic fire.  The damage was not severe, and repairs were done to bring it back to a habitable state.  During the War of the Rough Wooing in 1544, the castle suffered more severe damage.  The keep was almost completely destroyed.

In the late 16th century, the castle was again rebuilt and repaired.  It is at this point that the five-storey East Range was constructed, and a more permanent stone bridge was built.

Sadly, Cromwell’s destructive tentacles reached even as far as Roslin.  In 1650, his commander in Scotland, General Monck, bombarded Roslin Castle resulting in terrible damage.  By the 18th century, the building was in a sad state.

Between 1982 and 1988, the East Range was restored (to a certain extent) and is now a holiday let.  Roslin Castle is a Scheduled Ancient Monument and Category A listed building.