“Sour Plums” is a very strange motto for a town, I would have thought 🤔.  But this is Galashiels in the Scottish Borders and there is a story behind the strange motto.

The story goes that a group of retreating English soldiers, in 1337, paused to gather wild plums growing near the joining of the rivers Tweed and Gala.  The English were so engrossed in picking these plums that they were surprised and slain by a party of Scots soldiers.  The bodies of the English soldiers were thrown into a trench known as the Englishman’s Syke.  “Sour Plums” refers to the fact that the plums “tasted sour” to the luckless English invaders.

I was delighted to learn this little morsel of Galashiels history (and much more besides) when I visited Old Gala House, near the centre of the town.

In one of those funny twists in history, the Old Gala House has actually outlived the “New Gala House” by several years – and counting! 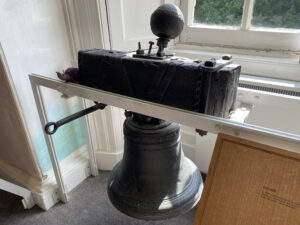 In 1457, a Tower House was built on this site, by the Hoppringill (Pringle) family.  In 1583, Andrew Hoppringill carried out great improvements and extended the house as his family home.  Further expansion took place in 1611.

In 1635, Andrew moved to his original family seat of Smailholm Tower, and Old Gala House passed to his newly married daughter, Jean.  Her husband, Hugh Scott became the new laird at Galashiels.  Hugh continued renovations and extensions to the house, as did his descendants.

Hugh Scott, 9th of Gala commissioned a new house, in 1872.  This New Gala House was built only a short distance from Old Gala House and the family moved there, abandoning the old house.

In 1985, New Gala House was demolished.  This is around the same time that the Scottish Borders Council decided to renovate Old Gala House and turn it into a museum and conference centre.

Apart from being a beautiful example of historical architecture, the museum at Old Gala House is fascinating.  It tells the story of the town and its people – from its textile mill industry to its Reivers heritage, and from “Braw Lads Gathering” to a poem written by Robert Burns.  Galashiels has a lively history, and this museum brings it all into focus for the visitor.

The museum also has a permanent exhibition on Thomas John Clapperton (1879 – 1962), well-known artist and sculptor.  Another part not to miss is the colourful painted ceiling, dating from 1635.

And then there are the gardens.  Tranquil, peaceful, and beautifully kept.  On three sides of Old Gala House, you will find manicured gardens, a waterfall, fountain, and Tree of Tranquillity.  It is the perfect place to reflect on the multi-layered history of this old town, on a sunny summer’s afternoon.