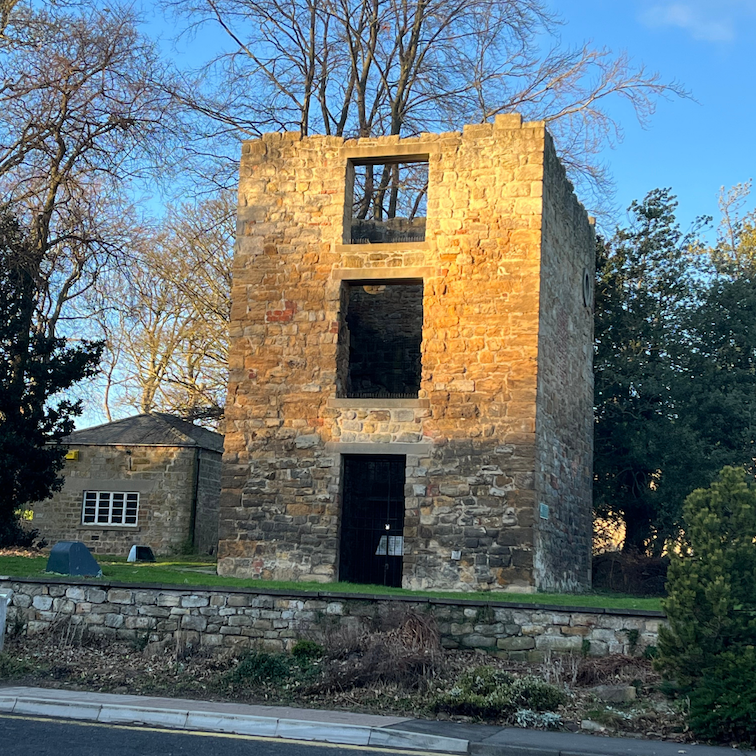 I couldn’t resist exploring the Vicar’s Pele Tower in Ponteland after visiting St Mary the Virgin Church.  After all, the Pele Tower is literally around the corner from the church.  In fact, the Pele Tower was used as a vicarage after it was rebuilt in the 17th century.  Sadly, most of the building was demolished in the 19th century.  Though not much is left standing, it is still very much worth a visit.

What Exactly is a Pele Tower?

Tower houses are a type of defensible house particularly characteristic of the borderlands of England and Scotland.  Virtually every parish had at least one of these buildings.  Solitary tower houses comprise a single square or rectangular `keep’ several storeys high, with solid barrel vaults tying together massive outer walls.  Many towers had stone slab roofs, often with a parapet walk.  Access could be gained through a ground-floor entrance or at first-floor level, where a doorway would lead directly to a first-floor hall.

Solitary towers were typically accompanied by a small outer enclosure defined by a timber or stone wall called a barmkin.  Tower houses were being constructed and used from at least the 13th century to the end of the 16th century.  They provided prestigious defended houses permanently occupied by the wealthier and aristocratic members of society.  As such, they were important centres of medieval life.  The need for such secure buildings relates to the unsettled and frequently war-like conditions which prevailed in the Borders throughout much of the medieval period.

Around 200 examples of tower houses have been identified, of which less than half are of the free-standing or solitary tower type.

The 14th century Pele Tower in Ponteland is located in the centre of the town and still stands a full three storeys high.  It was built with random rubble and patched, here and there, with brick.  Though the Tower is roofless, it is still in excellent condition.

The Tower measures approximately 7m by 6.2m and has three large openings in the south wall – clearly where the main entrance used to be.  The west wall also had doorways in the past, but these have been blocked up at some point, along with two window loops in the same wall.  These doorways possibly led to an attached building (which is no longer extant).

Sadly, I could not enter the Tower as there was a massive metal gate blocking the entrance.  I did manage to peek through the metal bars to observe most of the interior.  In the northeast corner, at first-floor level, is a small room that may have been a garderobe.  There is also evidence of a fireplace at first-floor level.

One thing that excited me was an Anglo-Saxon grave marker used to partially block up a door in the external east wall.  I saw a similar grave marker at St Mary the Virgin Church, nearby.