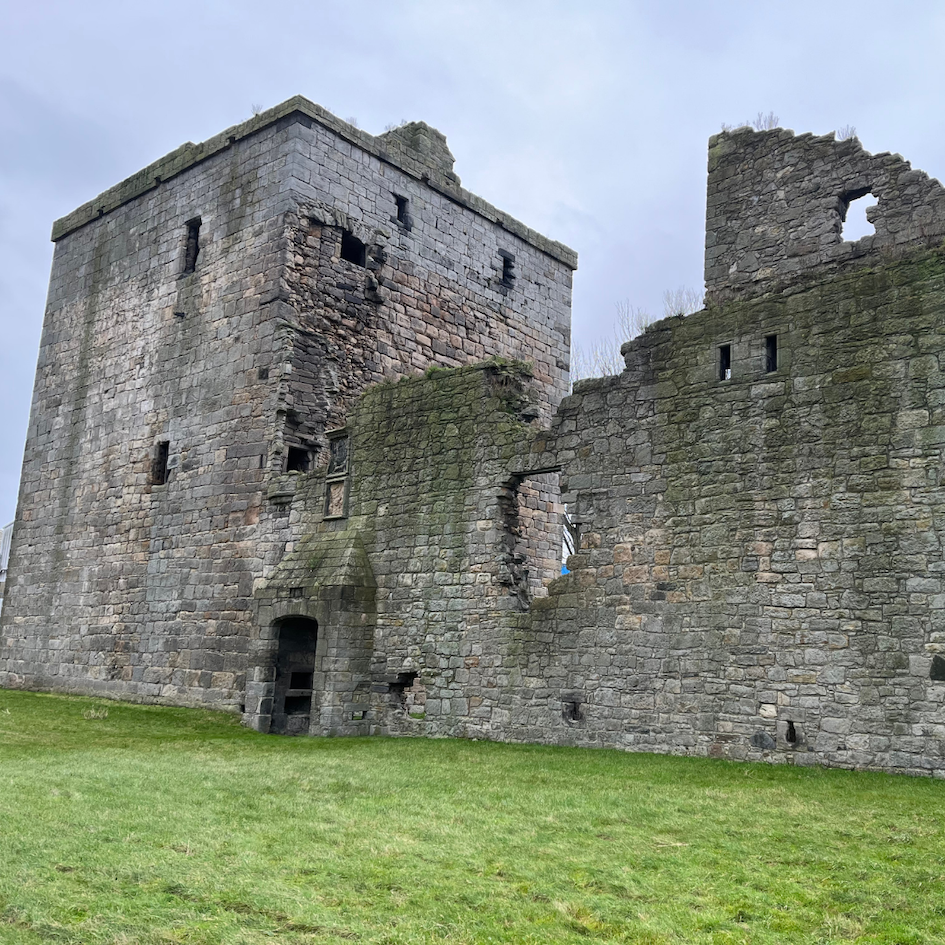 It is strange to think that, where I am standing looking up at Rosyth Castle, would have been under water not too long ago.  You see, Rosyth Castle used to be on a tiny island in the Firth of Forth – reached only at low tide.  Today, the landscape looks very different.  The Rosyth Naval Dockyard has been built right next to (and almost entirely encircling) the Castle.  Land was reclaimed for this purpose.  So now, one can drive right up to the Castle – no boats needed 😉

I decided to travel to Rosyth Castle on a Sunday morning.  And I think this was a good idea – even if it only made parking easier!  Due to the Dockyard being located right next to the Castle, I think nearby parking may be difficult during the week when the area gets quite busy.  On a Sunday morning, though, all was quiet, and I managed to find a parking spot close by.

Even though the Castle is not on port-owned land, I thought it best to ask permission to enter the fenced-off site.  The friendly gentleman at the Dockyard Security Hut told me all about the reclamation of the land and pointed to a nearby hill where the waterline once was. 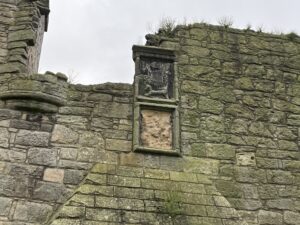 Crests above the entrance to Rosyth Castle

Rosyth Castle is now in ruins.  Several walls still stand to a considerable height, though.  And the Keep is mostly intact (though inaccessible).

A few beautiful features can still be seen.  Above the main entrance, for example, are two crests.  The bottom one is badly weathered and illegible but used to be inscribed with the initials of Margaret Napier, wife of James Stewart, who did repairs to the Castle in 1635.  The top crest is still quite beautiful.  This is inscribed with “MR” – Maria Regina – in honour of Mary, Queen of Scots.

Also, at the main entrance, one can clearly see the holes in the walls, where gates were once attached.  And the wooden door at ground level of the Keep is still very much functional – and locked!  The remains of several fireplaces can also still be found in the ruins – clearly, this Castle was once well used and inhabited.

Sir David Stewart was granted the Barony of Rosyth in 1428.  He felt the need to build a secure residence, so Rosyth Castle was built in 1450.

The original L-Shaped Tower House was 58 feet high.  This was extended and enlarged during the 16th and 17th centuries.

Of course, Rosyth Castle was loyal to Mary, Queen of Scots but Mary’s reign descended into civil war.  On 15 June 1567, near Edinburgh, she surrendered to her opponents and was imprisoned in Lochleven Castle, where she was forced to abdicate in favour of her infant son, James.  However, in May the following year, she escaped and headed towards Glasgow to rally her supporters.  Local legend suggests she visited Rosyth Castle en route.  Mary’s forces were subsequently routed at the Battle of Langside on 13 May 1568, after which she fled to Carlisle and permanent captivity in England.

Following Mary’s defeat, the Stewarts of Rosyth supported the Regency of James Stewart, Earl of Moray.  However, Blackness Castle, on the southern shores of the Forth, was held for the Queen.  Despite attempts to blockade Blackness, its garrison periodically raided sites along the Forth and, in 1572, attacked Rosyth Castle.  Blackness surrendered to the Regent’s regime the following year.

The Castle was again attacked (and then occupied) by Cromwell’s men in 1651.

It did remain a Stewart residence until it was sold in the late 17th century to David Drummond.  Later, ownership passed to the Earl of Hopetoun.  From the 18th century, it has been unoccupied, though.  Since then, the Castle has become more and more ruinous, with some stone taken away and reused in nearby projects.  In 1903, Rosyth Castle became the property of the Admiralty.  It was at this time that the land reclamation took place, and the Castle lost its waterfront position.