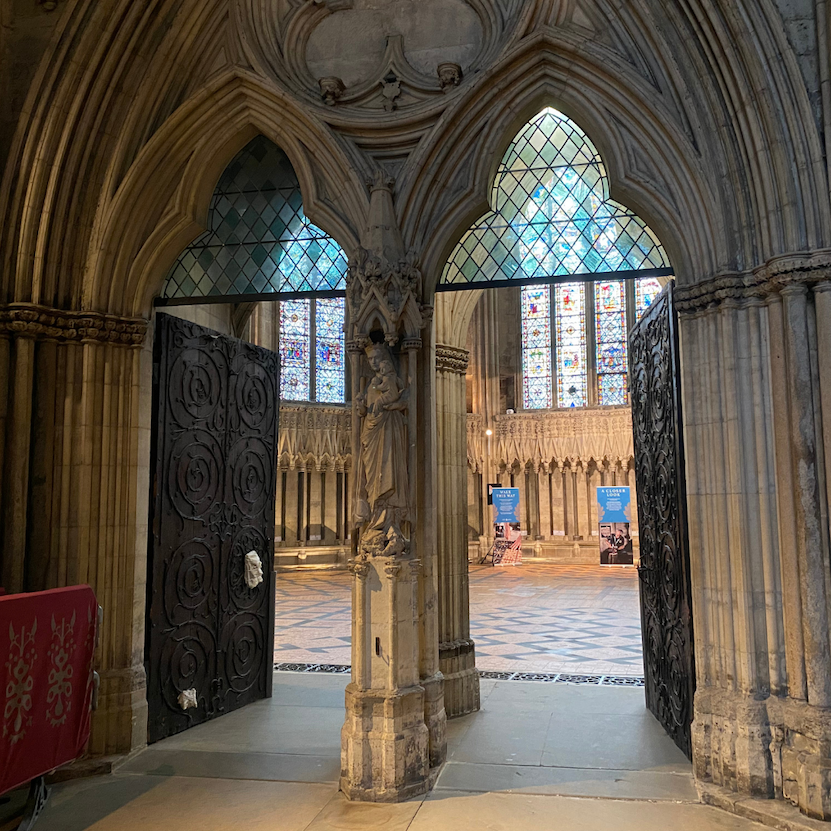 Friday the 13th has always been deemed unlucky.  Well, certainly since October 1307.  On this day – Friday 13 October 1307 – all members of the Knights Templar in France were arrested and subsequently condemned to death.

This was the beginning of a Europe-wide persecution of the Order of the Knights Templar.  This “hunt” came to Britain too, and Templars were rounded up and locked in York Castle, awaiting trial.  Persecution in Britain was less severe than in France, for example.  Initially, the Templars were allowed out of the Castle during the day, but in March 1310, this changed, and their imprisonment became complete.

Thankfully, torture did not blemish this magnificent room.  In York, no torture was allowed during the trials of the Templars – one of the very few places where they escaped this brutal style of interrogation.  And in York, again quite different from most other places where Templar trials took place, the Templars were not condemned to death.  The dissolution of the Templars was ordered, and its members were sent to monasteries.

Entering through two beautifully carved wood and iron doors, set in a single arch, I stepped into the vast chamber of the Chapter House.  It may be a cliché, but I was absolutely awestruck by the splendour inside the Chapter House. 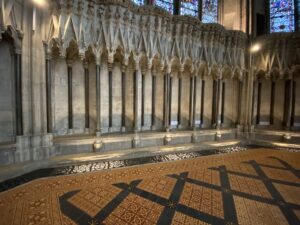 There is a stillness that one cannot describe.  I felt calm – at peace.  And looking around the octagonal room, the massive stained-glass windows each tell a story.  Another exceptional feature is the magnificent, vaulted ceiling.  It is supported by timbers in the roof instead of a central column.  This is the earliest example of its kind to use this revolutionary engineering technique.

Below the windows are individual stalls – all around the room – where officials would sit to discuss the day-to-day business of York Minster.  Many cathedrals have elaborately wood-carved choir stalls where the canons would sit during session.  The shape of York’s Chapter House democratised that rectangular concept:  All canons are considered equals in decision making, and so an octagonal-shaped chapter house keeps the dean (its nominal president) from sitting at the head of the room.  Significantly, the archbishop was not a chapter member and did not have a seat.

And the floor deserves a closer look too!  It has beautiful, colourful designs throughout.  The floor is made of inlaid pattern tiles.  A pattern is formed on the mould, and the resulting depressions are filled with a different coloured slip clay.  As a result, the pattern is inlaid into the body of the tile, so the design remains as the tile is worn down.  These tiles were then glazed, and many still have their original yellow overglaze.  They were made by Mintons of Staffordshire, a leading ceramic factory in the 1800s, who have produced work for the Houses of Parliament and US Capitol.  Mintons had a catalogue of designs to choose from.  There is an invoice from 1845 which includes 4 moulds, meaning four patterns are unique to York Minster.

The Chapter House in York was completed in the 1280s under Archbishop John Romeyn.  Its purpose was always as a place from where the day-to-day business of the church can be conducted.

It was, however, not exclusively used for church matters.  In 1296, King Edward I held his Parliament here in York’s Chapter House.  And, as we have seen earlier, the venue was also used for important judicial matters – as in the case of the Knights Templars.

Throughout the centuries, York Minster Chapter House has been in use and kept in excellent condition.  Most of the magnificent windows are restorations of the 13th and 14th centuries, but the window facing the door is from the 15th and early 16th centuries.

Above the seats reside some of the best surviving carvings in the Cathedral.  These include funny faces, animals, and mythic beasts.  About 80% of these are original from 1270-1280.  The remainder is from an 1845 restoration.