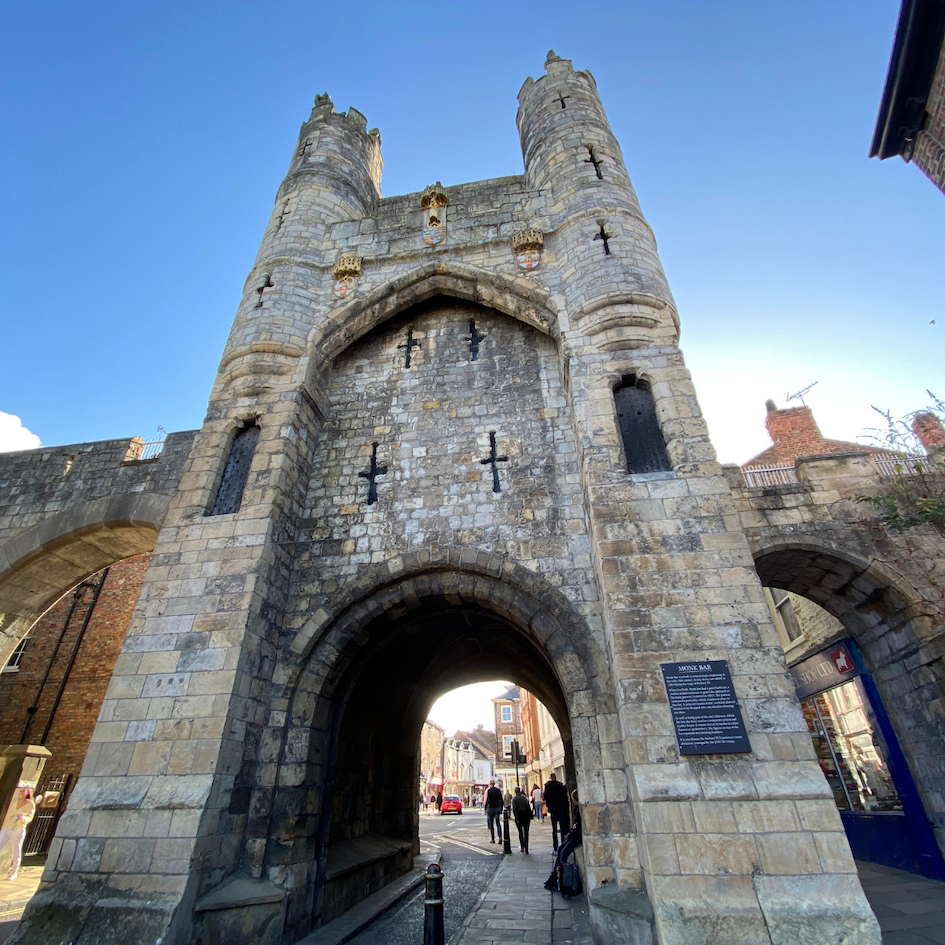 Arriving in the city of York by railway, one of the first things one sees is a section of the magnificent Medieval Defensive Walls.  These walls are still as impressive and solid as they must have been in the days when its purpose was the defence of the city.

If you are planning to explore all the remaining sections of York’s Medieval Defensive Walls (and I strongly suggest you do!), you’ll need to put aside around two hours to do so.  In many places, one can climb up onto the wall walk to explore from that perspective – and the views are often spectacular.

The charitable organisation, Friends of York Walls, offers a beautifully detailed map of the walls.  This map was immensely useful during our exploration of the Walls.

In medieval times (and even before that), people recognised the need to defend themselves against attacks from their enemies.  Many cities around the world decided to fortify themselves by building strong defensive walls around their settlements.

The people of York did precisely that – and in fantastic fashion!  York’s Medieval Defensive Walls comprise 3.4km (approx. 2 miles) of surviving masonry.  They are the longest town walls in England and are mostly very well preserved.  This allows us to really explore and understand how these walls were built.

The Romans Build a Wall

The first defensive walls in York were built by the Romans around 71AD.  They created a fort on the banks of the River Ouse and needed to fortify this new settlement and built a rectangle of walls.

Some parts of these early Roman walls are still extant.  These can be seen in Museum Gardens, in the West corner, which includes the Multangular Tower.  There are also Roman walls still standing between Bootham Bar and Monk Bar, and again between Monk Bar and the Merchant Taylor’s Hall.

The Multangular Tower in Museum Gardens is a must-see!  This was built around 315AD by Constantine the Great.  The tower stands almost 30 feet (9.1 m) tall has an external diameter of 48.5 feet (14.8 m) at the base and 46 feet (14 m) above the skirt.  It is an excellent example of Roman defensive architecture.

By the year 867, the Roman walls were in a poor state of repair.  The Danes occupied York at the time and decided to demolish most of the towers (except for Multangular Tower).  They did also do some repairs to the remaining Roman walls.

The remainder of what can still be seen today was built between the 12th and 14th centuries.  For these parts of York’s Medieval Defensive Walls, magnesian limestone was used in the construction.  The defences were further amplified by constructing a ditch alongside the walls.  This ditch was once 60 feet wide and 10 feet deep – an incredibly effective defensive technique.  Sadly, most of this ditch has been filled in and no longer exists.

The walls were repaired during the English Civil War and again later during the Jacobite Risings.  In Victorian times, York’s Walls were again restored, and some parts of the wall walk were widened.

Exploring the Bars and Towers in York

We started our tour at Bootham Bar, near York Minster – but you can really start your tour anywhere along the Walls.  From here, we walked a clockwise route along the Walls.  Although much of Bootham Bar was built in the 14th and 19th centuries, it also has some of the oldest surviving stonework, dating to the 11th century.  It was named in the 12th century as “barram de Bootham”, meaning Bar at the booths, after the nearby market booths.  It was the last of the bars to lose its barbican, removed in 1835. 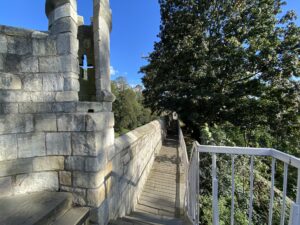 From here, we walked along Lord Mayor’s Walk (with the most amazing views of York Minster) towards Monk Bar.  This four-storey gatehouse is the tallest and most elaborate of the four Bars and was built in the early 14th century.  Today, Monk Bar houses a museum called the “Richard III Experience at Monk Bar” and retains its portcullis in working order.

From here, the route takes one over the River Foss and then alongside it, to Walmgate Bar.  Most of this Bar dates from the 14th century and still has its barbican.  Walmgate Bar was severely damaged by cannon fire during the English Civil War but was again repaired.  Just a bit further along the route is Fishergate Bar, dating from 1315.  This is one of the “minor” Bars, along with Victoria Bar.  The latter being a 19th-century addition to the Walls.

Continuing our tour, we reached Micklegate Bar, near the railway station.  It was the traditional ceremonial gate for monarchs entering the city, who, in a tradition dating to Richard II in 1389, touch the state sword when entering the gate.  The lower part of this Bar was built in the 12th century and the upper part in the 14th century.  Another tradition regarding Micklegate Bar was to display the heads of traitors here for all to see.  Notable heads on display in the Middle Ages were those of Henry Hotspur Percy (1403), Henry Scrope (1415), Richard Plantagenet (1461), and Thomas Percy (1572).

During the last part of our tour, we explored the Multangular Tower in Museum Gardens before making our way back to Bootham Bar.

The City of York is absolutely jam-packed with historically important sites.  Listed here are only a few: