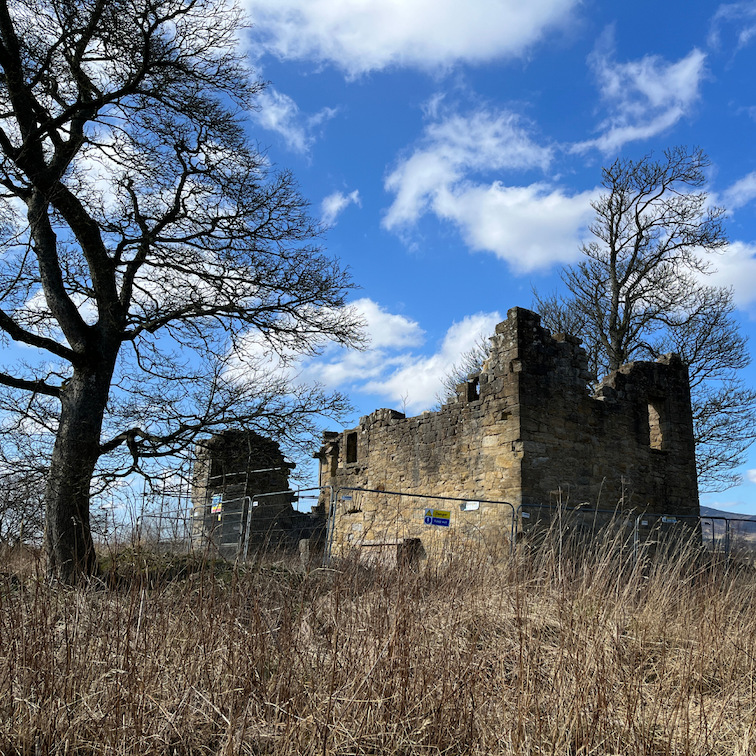 With spectacular views over the little town of Penicuik and the Pentland Hills to the North and West, Uttershill Castle stands atop a rocky hill beside the B6372.

It was pretty easy to find – Castle ruins tend to stand out against the landscape, even from a distance.  Parking our vehicle was less easy!  The B6372 is a reasonably busy road, and there is precious little space along the road where one can pull over and park.  Keep this in mind when exploring Uttershill Castle 😉.  It may be better to park further along the road (away from town) and walk back.

Reaching the top of the hill, I was awestruck at the beauty and expanse of the view.  Uttershill Castle is located on a high hill, overlooking the River North Esk to the North and the River Black Burn to the West.  To the East flows a smaller burn, providing further defence.  It is indeed the perfect place to build a Castle.

Sadly, not much of Uttershill Castle is still standing.  Some parts of the North wall are still standing, though, as is a small section of the East Wall.  The remainder has mostly collapsed over time, with rubble strewn about.

A few large spaces where windows once looked out over the hills can still be seen in the North and East walls.  And the remains of what I believe in having been a fireplace can be seen under a heap of rubble against the Western-most wall.

Not much is known or documented about Uttershill Castle.  It also seems that it never played any significant military role in the past. 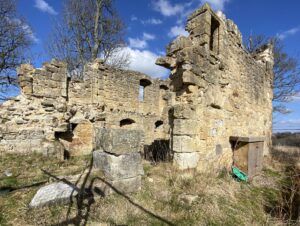 Interior of the ruins of Uttershill Castle

Uttershill Castle was built around 1510 as a two-storey bastle house for the Penicuik family.  The structure was rectangular, measuring around 12 meters by 7 meters, and consisted of a central hall above a vaulted ground floor.  The entrance was on the South side, at ground level, and a straight staircase built within the thickness of the wall led to the first floor.

In 1604, the Castle passed to the Preston family.  They extended the structure to the East, adding an unvaulted kitchen with a room above (possibly used as accommodation for the family).  This extension resulted in the Castle then measuring 20 meters in total.

By 1717, the lands around the Castle were sold to Sir John Clerk, but documents are unclear about the actual Castle.  It seems Robert Preston only vacated the Castle in 1719.  It may be that ownership of the Castle only passed to Sir John as late as 1719, but this is unclear.

Uttershill Castle remained in use as a farmhouse until the late 18th century but was already showing signs of decay even then.  By the late 19th century, most of the Castle was already in ruins, but a small area was still used as a gunpowder store.

In the 20th century, Uttershill Castle was sold twice with a view to restoration.  This has not yet materialised, as the entire Castle is surrounded by Heras Fencing, and it is in a truly sorry state.