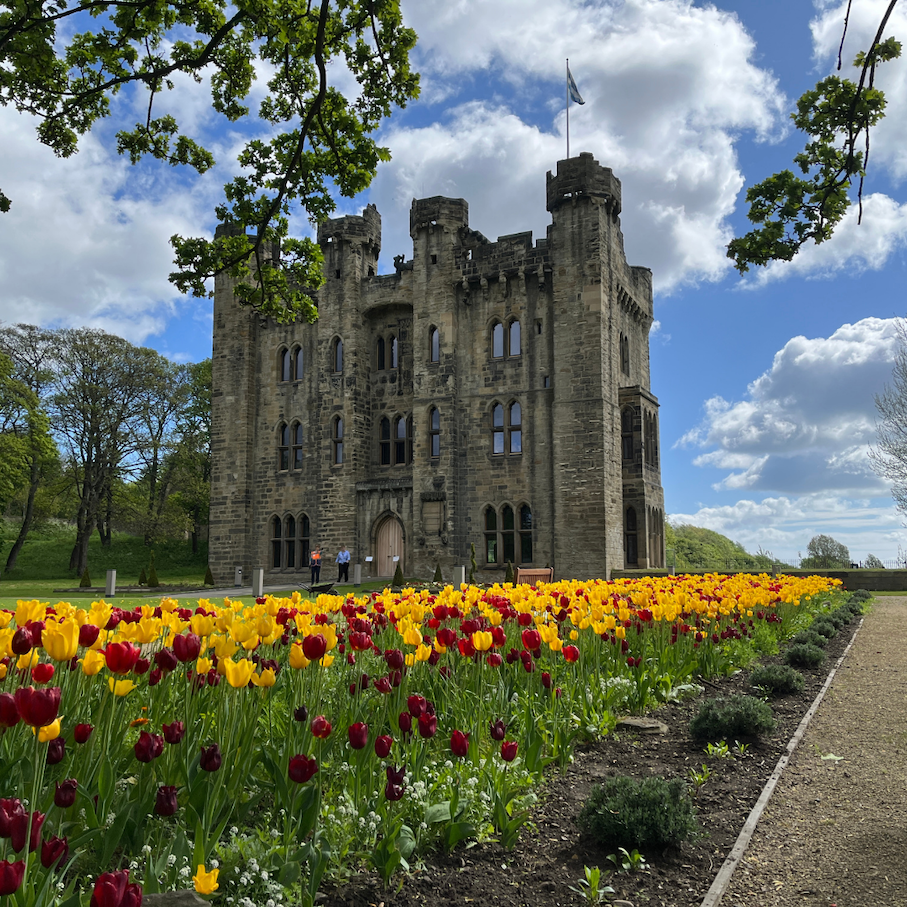 Robert Skelton was executed because he overslept.  And so, he became the “Cauld Lad of Hylton” – a ghost said to haunt Hylton Castle.  Or, at least, so the story goes.

Robert was a stable boy at Hylton Castle and his master, the 13th Baron Hylton had ordered him to prepare his horse for an important journey, on this particular morning.  Sadly, the young boy overslept, and the horse was not prepared in time.

Flying into a rage, Baron Hylton killed the boy (some say, by beheading) and disposed of the body in an unused well.   Months later, the body was found.  Baron Hylton was never convicted of the crime as he claimed to have an alibi.

There are stories of strange occurrences at the castle – things being moved about; chamber pots being emptied on the floor and a mess left in the kitchen.  All these strange happenings were attributed to the ghost of young Robert Skelton.

I wanted to see where young Robert had lived and died.  I wanted to walk the same land that he had walked.  I wanted to see Hylton Castle and experience the place for myself.  When I recently found myself in Sunderland, with a bit of time to spare, I grabbed the chance to visit this grand old place.

Driving through the majestic gates and up the short drive to Hylton Castle, the grandeur of the place is very noticeable.  Set in perfectly manicured gardens with bright, colourful flowers, the Castle stands proudly overlooking Sunderland.

The Castle itself was closed when I visited (it is only open for pre-booked tours on certain days of the week) so I couldn’t explore the interior.  The exterior is however so beautiful that it made the visit very much worthwhile.

Hylton Castle is a square-ish stone building with several towers, standing to a height of three floors.  As with most Castles, Hylton has been changed, added to, renovated, and partly demolished over the centuries.  So, what we see today, is not even close to what stood here in medieval times.

Just to the north of the Castle, on the same grounds, are the ruins of St Catherine’s Chapel.  This Chapel was very much part of the history of Hylton Castle, so I walked up the steps to explore this area too. 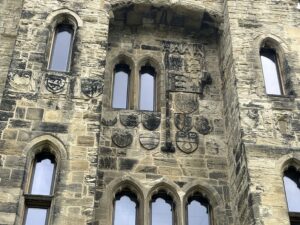 The Hylton family has been around for a very long time.  There are records of the family living in the area since at least the reign of King Athelstan (895-939).  When William the Conqueror arrived in England, the Hyltons threw their lot in with him and his forces.  Lancelot de Hilton and both his sons fought with William but sadly, Lancelot was killed in action at Faversham.  In gratitude, William granted large tracts of land on the River Wear to Henry de Hilton.

It is here, on this land, that Henry de Hilton built the first Castle in 1072.  This structure was constructed of wood, as many Castles were at that time.  It was only later, around 1400, that the Castle was rebuilt in stone.  This was done by Sir William Hylton when he needed a stronger, fortified residence.

This stone Castle was much larger than what we can see today.  There is evidence of barns, a kitchen, and other buildings at this time, though no records of the construction survive.

In 1641, Henry Hylton (12the Baron Hylton), who was rather eccentric by all accounts, left the Castle to the City of London Corporation, in his will.  They were to use it for charitable purposes for ninety-nine years.  It was only returned to the family after the Restoration, when John Hylton, 15th Baron Hylton took possession again.

In the 18th century, the Hyltons did a great deal of rebuilding, renovation, and improvements at Hylton Castle.  When the 18th and last Baron Hylton died without male heirs, in 1746, the Castle passed to his nephew, Sir Richard Musgrave (who then took the name Hylton).  He then tried to sell the Castle for £30 550 to a Mr Wogan, but the sale was never completed.  Instead, Lady Bowes, the widow of Sir George Bowes of Steatlam, bought the Castle.

Her grandson, John Bowes, 10th Earl of Strathmore and Kinghorne, again added to the Castle and made many changes.  William Howitt, in his “Visits to Remarkable Places” (1842) mentions “stuccoed ceilings, with figures, busts on the walls, and one large scene which seemed to be Venus and Cupid, Apollo fiddling to the gods, Minerva in her helmet, and an old king.”  It all sounds very grand.

Later in the 19th century, the Castle was used as a boarding school, a carpenter’s workshop, and a farmhouse, at different times.  But decay had already started to set in.  It was no longer the grand residence that it once was.  Eventually, the Castle was sold to William Briggs who put in some effort and finances to restore the Castle.  A lot of what can be seen today, is due to William’s efforts.

When Colonel Briggs died in 1900, Hylton Castle passed into the hands of Wearmouth Coal Company.  Again, decay set in, and the Castle fell into a bad state.  In 1950, the Ministry of Works took it over, appointed a permanent custodian and replaced the missing roof.

Hylton Castle is now in the care of English Heritage and can be visited by the public.

One of the most notable parts to see at Hylton Castle, can be found just to the right of the main entrance, on the outside wall.  There are no less than 20 shields of arms carved into the wall – much more than I had ever seen at any Castle.

These show the political alliances of the Hylton family and can also give us a clear understanding of when the Castle was built.  The list of powerful names is long (as you can imagine with 20 shields!).  Carved are the banner of Henry IV of England, several members of the Percy family, the Lucy family, Sir Peter Tilliol, Sir William Heron, Baron Lumley, the Grey family, Sir William Washington, the Bishop Skirlaw, and many others.  There are also the Royal Coat of arms of Scotland and of course, the Hylton shield of arms.  It is quite a lot to try and decipher! 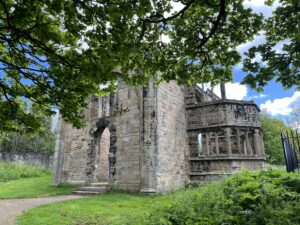 After a good look around Hylton Castle, I walked up to the ruins of St Catherine’s Chapel.  The chapel have existed on this site since 1157, when the Prior of Durham agreed to allow Romanus de Hilton to appoint his own chaplain for the chapel.  The story of St Catherine’s Chapel and the Hylton family have been intertwined since the very beginning.

In the early 15th century, the chapel was rebuilt in stone.  Less than 100 years later, modifications were made when a Perpendicular Gothic, five-light east window and transepts were added.

Further changes were made in the early 19th century when a bell-turret was added.  This was the final work ever done at the chapel.  By the latter part of the 19th century, the chapel fell into disrepair.  It is now in the care of English Heritage but is in a severely ruinous state.