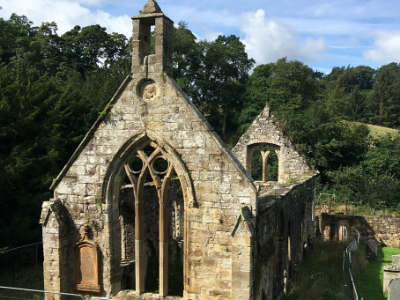 Driving into the village of Temple is beautiful and peaceful in equal measures. Massive old trees line the narrow, curvy route from the North (A7 and then the B6372).  It was easy to spot the Old Kirk nestled next to the River South Esk, below the road.  The challenge was finding parking!  I drove past the ruin, turned around in the narrow little road and drove past again – uphill into the village proper.  There I found a parking space and a delightfully friendly local resident, who has lived in Temple all her life.  After a bit of a chat, I set off down the hill to finally visit the Old Kirk – something I’ve been looking forward to for months.

The churchyard flows over three tiers, against the bank of the river.  I entered through the little iron gate at the top end and just stopped.  I felt I needed to just take a moment to experience the essence of the place. This is where people have come to practice their religion for centuries.  This is where the Knights Templar congregated.  This place has deep history.

The History of the Village of Temple

Temple lies to the South of Edinburgh, in Midlothian.  In ancient times, it was known as Balantrodach – from the Scottish Gaelic “Baile nan Trodach”, meaning “town of the warriors”, in reference to the presence of Knights Templar in the area.  This was in fact a very important town for the Templars.  In 1128 David I, the Scottish King, granted these lands to the Knights Templar, who made it their principal seat and preceptory in Scotland.  It was from here, in Balantrodach, that they oversaw their estates and interests in Scotland.

Over the years, the preceptory became the parish kirk and, in 1618, when three original divisions were combined to create the present parish, Balantrodach had a name change.  It became Temple (after the preceptory).

The History and Architecture of the Old Kirk

The current building is not the first to be built on this site.  We know that the Knights Templar built a monastery and church (dedicated to the Virgin Mary) here.  Masonry dating from the 12thcentury was reused at a later date for rebuilding.

The current Old Kirk dates from the 1300s and was probably built by the Knights of St John (Hospitallers), as they were given almost all of the Templar properties after the dissolution of the Templar Order.

What can still be seen today, are the four walls of the single-chambered structure. This is still in very reasonable condition.  Sadly, the kirk itself has been cordoned off for safety reasons, with a mesh fence all around it.  The churchyard is however open for exploration.

The small recess (Piscina) where the priest would wash his hands before service.

Inside the Kirk structure, several tombstones can be seen, as well as an arched space in the West wall (which I believe to be an Easter Sepulchre).  Both gables are still there (one with what looks like a Templar Cross), but sadly the roof no longer exists.  Also still visible inside the Old Kirk, is the Piscina recess where the priest would wash his hands.

The Churchyard at the Old Kirk

This is a very interesting churchyard with many unusual gravestones.  The grass is a bit long so you might have to look very carefully to really appreciate the beauty here. (The grass was also very wet after the previous night’s rain, so my trousers were wet from the knees down, after my visit!).

There are several gravestones with distinct “cross 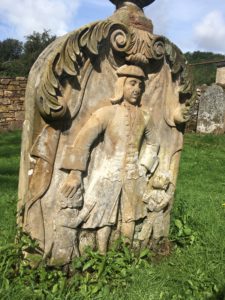 Grave stone of John Craig who died in 1742

bones” carvings (dating from the 1600s), as well as exquisitely preserved Celtic designs.  For me, the most unusual gravestone is that of John Craig who died in 1742.  It has a carving of a man (possibly John himself), with two of his children. Beautiful!

I truly enjoyed my peaceful morning at the Old Kirk in Temple.  It is most definitely worth a visit.

← The Camera of Adam of JesmondRyton Holy Cross Church →