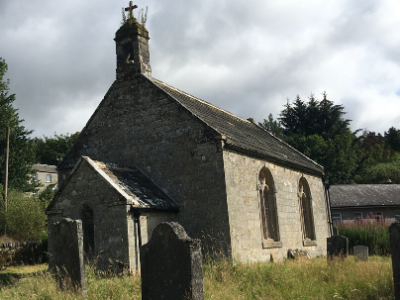 Driving North on the A68, we nearly missed this delightful little church.  In fact, we did miss it!  Just as we were exiting Byrness village, we spotted it to the left of the road, among several large, old trees.  Turning around, we drove back and parked under one of those trees, to take a closer look.

The History of St Francis’ Church 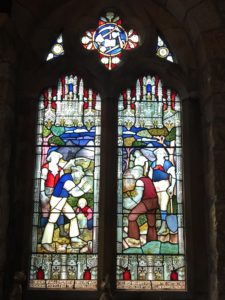 St Francis’ Church in Byrness, Northumberland was built between 1793 and 1796.  It was originally erected as a chapel-of-ease to serve the spiritual and educational needs of small farming communities in this remote part of the parish of Elsdon.

The Rector of Elsdon, the Reverend Lewis Dutens (historiographer to King George III), was a great benefactor.  He gave £1200 towards the endowment of the chapel. The rest (£500) was raised by subscription. Rev. Dutens also provided for a resident curate who, if required, had to teach twelve poor children from the neighbourhood, free of charge.

In 1884, St Francis became a parish church in its own right after it had been restored and enlarged by F.R.Wilson; he installed the clear glass windows with their delicate leaded tracery.

In January 1940, under the Union of the Redesdale Parishes, St Francis was joined with the neighbouring church, Holy Trinity, Horsley.

What not to miss

We were lucky in that the church was open, so we could explore at leisure.  It was very quiet – not another person in sight, in or around the church.  This little delight is definitely worth a visit when you find yourself in the area.