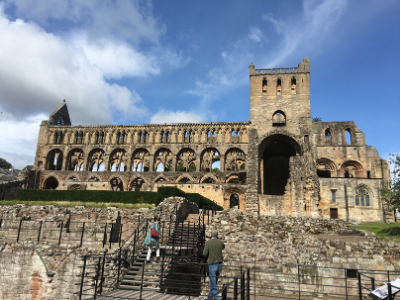 Breath-taking.  Truly breath-taking.  As we travelled around a curve in the A68, coming into Jedburgh from the South, we were absolutely awestruck.  To the left of the main road, on higher ground, stands the majestic Jedburgh Abbey. I had to pull over and just drink it all in.  It is possibly one of the most awesome (in the true sense of the word) historical places I have ever seen.

I knew I had to contain my excitement a bit.  We have been on the road for several hours and this type of historical exploration required time.  A great deal of time!  Jedburgh Abbey requires much more than just a quick look.  So we headed off for lunch first at a delightful little pub overlooking the Abbey.  And then the exploration began!

After paying my entrance fee and also investing in the official visitor guide (well worth it and highly recommended), I set off to see and experience the magnificence of the Abbey.

The History of Jedburgh Abbey

Long before the Abbey was founded, this was a sacred site.  Already in the year 830, a church was established here by the Bishop of Lindisfarne.  It is no surprise then, that King David I (jointly with Bishop John of Glasgow) decided to found Jedburgh Abbey on this spot.  The location was perfect – it is on high ground, the Jed Water runs right past it and also, very importantly, it is only 10 miles from the English border. By founding the Abbey here, King David I was sending a strong message to the English, displaying his power and dominance in the region. 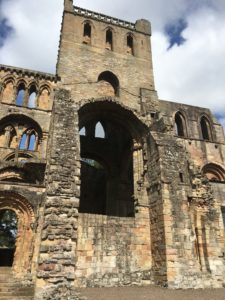 When it was founded in 1138, it was as a priory, but by 1154 the Augustinian house had been elevated to the status of an abbey.  It’s location so close to the border did make it particularly susceptible to attack and the Abbey experienced many occasions of military action, which often resulted in damage to the building.  In 1540, the level of devastation was so great, that the Abbey never fully recovered.  By 1560, during the Reformation, the decline was absolute and irreversible.  Local parishioners however continued to use the Abbey as a church until the latter part of the 19thcentury.  The fact that it remained in use for such an extended period of time is possibly one factor that lead to the Abbey being preserved so well.  Today, most of the church walls are still standing, even though almost all of the accompanying buildings have severely suffered the effects of time. 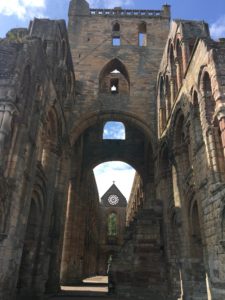 At the East end of the church is the presbytery, containing the high altar. Just in front of this was the canon’s choir, stretching below the tower and into the East of the nave. Transepts, projecting on either side of the choir, formed the two arms of the cross.  The nave formed the shaft of the cross.  This is where the lay people worshipped.

The East end (the spiritual heart of the Abbey) was developed over many years, in three phases.  In 1138, the church was built in the Romanesque style (which can be seen best in the choir elevations).  There is an unusual arrangement of giant, column-like piers with scalloped caps, which rise through both the arcade and the gallery.  The second phase of development started around 1180.  At this time, the presbytery was rebuilt and extended. New slender windows were set into an elegant arcade of alternate high and low pointed arches.

The final phase of work consisted of the construction of a clearstory.  At first, the builders added a low clearstory to the East end of the church.  Later, this was replaced with a taller clearstory over the presbytery and choir (leaving the low clearstory in the transepts).  All of this work was only completed at some point in the 13thcentury.

The English attack of 1464 necessitated a major reconstruction of the crossing area, when the Southern piers beneath the tower were rebuilt and strengthened.  There-after, the tower was reconstructed and a barrel vault added to the South transept.

The last of the medieval works visible at the East end clearly shows how a financially exhausted community tried to limit the scale of damage.  The crudely-built walls and lowered roofs represent a desperate attempt to maintain a church in the crossing area.

Repairs were only just complete when again the English attacked, in 1544 and 1545. These attacks dealt a final blow to the church as it was used at the time.  After this point, the South transept was abandoned and the crossing became the parish church of Jedburgh.

By the late 1600’s the parish church within the crossing was declared unsafe, so a new church was built in the Western end of the nave.  The roof sprang from the top of the gallery and was entirely within the height of the earlier, original nave.  The entrance to this new church was through the West door.

By 1875, a new parish church was built, away from this site.  The church, which was in use since 1671 (in the nave), was dismantled and the Western end of the South Aisle wall was rebuilt.  This work also included the clearance of various walls and buildings, including the manse.

In 1913, Jedburgh Abbey became the first of the great border Abbeys to be placed into State care.

My timing was excellent.  Just as I was completing my exploration of Jedburgh Abbey, it started to rain – in fact, pour down!  Thankfully, the blue skies lasted long enough for me to get reasonable pictures and have time to fully appreciate the site. 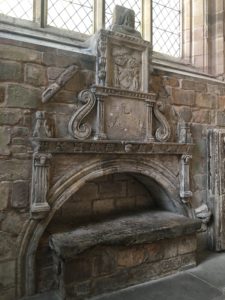 It is impossible to even try to decide what my favourite part of my visit was – there are so many things to see and explore!  The one thing I would urge any visitor to the Abbey to do is to climb the very steep steps up the tower.  It is very cramped and the steps are tiny, but the view from the walkway is amazing. From there, you can look down into the nave – absolutely beautiful.

The North transept was adopted as a burial place for the Ker family.  It contains tombs and memorials ranging in date from 1524 to the present day.  These are certainly worth a look!