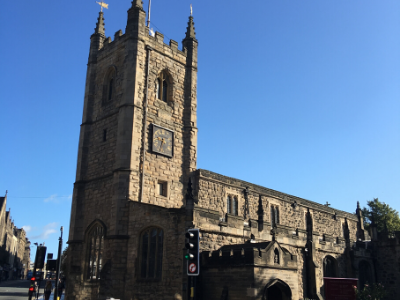 Sometimes, getting distracted is the most wonderful thing!  I was cycling down the steep Grainger Street in Newcastle (more like flying down!) on a sunny Wednesday morning, en route to a coffee shop, when I spotted this lovely stone church on the corner.  Pulling the brakes hard and forgetting all about the Mocha and pastry I was looking forward to, I pulled in at St John the Baptist Church. This looks much more exciting than a Mocha anyway!

As is my habit, I walked around the outside first, admiring the beautiful stonework and small churchyard.  I can imagine that the church had more land in years gone by, as it feels a bit hemmed in between several more modern buildings, but it still has a very peaceful feel amongst the large trees on the South and East sides.

The History of St John the Baptist Church

In Norman times (around 1130), a small church was built on this site.  It is thought that the builders used stones from Hadrian’s Wall to complete the work.  As is the case with most medieval churches, St John’s experienced many changes and expansions over the past several centuries.

In 1230, the tower was added to the small church.  Around 1350, the North aisle was built, followed by the South aisle and North transept.  At some point in the 13thcentury an anchorite cell was built.  Sadly, this cell is no longer visible.  The only remaining part of the anchorage is the small cross-shaped squint high up on the chancel wall.  This was used at the time, by the occupant of the anchorage, to see the altar during services.

During the 15thcentury, a wealthy lawyer named Robert Rodes decided to invest a sum of money in renovating and expanding the church.  This work included the raising of the nave walls with clerestory windows, the building of the South transept, rebuilding the South aisle and installing a new vaulted ceiling under the tower.  Robert’s coat of arms can be seen to this day, on this vaulted ceiling.

Very few changes took place after this extensive renovation, so what we see today is about the same as the church was, by the end of the 15thcentury.

Taking a Walk Around Inside St John’s

I usually feel a sense of calm and peace whenever I enter a church.  During my visit to St John the Baptist, this sense was magnified ten times over.  There are no words to describe it.  I just experienced a sense of total serenity the moment I stepped through the door. It was completely quiet.  There was no one around, apart from one man sweeping the floor in the North transept.  This is how I love exploring a historical site!

As is normal in most churches, the first thing I saw when entering was the font. This is housed beneath the tower and vaulted ceiling (where you can see Robert Rodes’ coat of arms).  This font dates from the end of the 17thcentury (the original was destroyed by Scottish soldiers who occupied the city during the Bishops’ War of 1640).  The detailed font cover dates from the late 15thcentury. 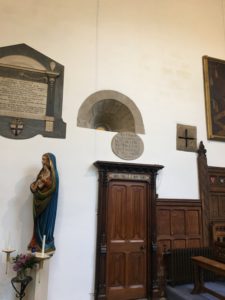 In the North wall of the nave are several memorials to local influencers like Charles Ilderton (1793), Frances Wharton (1775) and a number of church wardens (1758). The choir pews are also worth a closer look.  These were made by the famous North Yorkshire furniture maker, Robert “Mousey” Thompson. There are four of his signature mouse carvings on the pews.

Moving into the chancel, I spotted the stunning stained glass window.  This contains fragments of medieval glass, including the earliest known representation of the coat of arms of the City of Newcastle (c1375).  Further along the same wall is the cross-shaped “window” of the anchorage as well as the only remaining Norman window in the church.

The wooden pulpit dates from 1620 and is considered a fine piece of Jacobean woodwork. The craftsmanship is striking.

In the East window of the South transept (also known as the War Memorial Chapel), the Percy Shield can be seen.  This is one of the oldest pieces of glass in St John’s church. 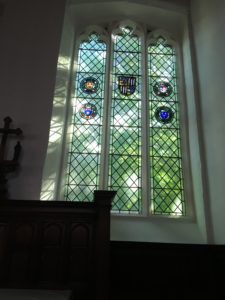 The Percy family were very wealthy and influential in the North East of England. So were the Lucy family.  So it is no wonder that the union of these two families was a major event in the late 14thcentury.

In 1381 Henry Percy (1stEarl of Northumberland) married Maude Lucy. Maude was a very well connected lady. She was the widow of the Earl of Angus and the daughter of Lord Thomas Lucy of Egremont and Cockermouth.  Maude was also the sole heir of both her husband’s and her father’s fortunes (no wonder Henry wanted to marry her!).  With this marriage, the Percy lands and power-base almost doubled.  There was a condition though.  The Lucy family would only agree to the union, if Henry Percy agreed that he and his heirs would wear the Lucy arms in their own heraldry.

The Percy window commemorates the marriage and shows the shield, which incorporates both, the Percy arms (lions) and the Lucy arms (pikes).

St John the Baptist is one of the most impactful medieval sites I have explored in recent years.  It tells so much of the local history and culture.  This one I’m keeping on my list for another visit!