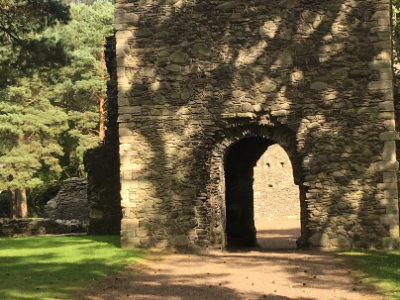 After several hours on the road, we were starting to get desperate for a coffee stop. So, as we drove into the lovely town of Peebles, we started looking out for somewhere to stop for refreshments. And as it always is in an unfamiliar town, you only spot the coffee shop once you are virtually past it!  So I had to drive on and look for a place to turn around.  This resulted in getting caught up in a few narrow roads and getting a bit lost! But, as it turned out, that was a good thing.

Nearing a bend in the road (which turned out to be Cross Road), we spotted the ruins. I had no idea what it was but I knew I had to stop and explore.  This looked interesting! 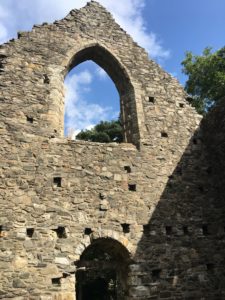 We entered through the little wooden gate into a large piece of land with loads of massive trees.  On a hot day like this, the shade is very welcome.  Right in front of us, was a high tower with ached entrance.  This leads to a rectangular building with further door openings.  From the inside, I looked back up at the tower where there are still the remains of a spiral staircase.

Leaving the ruins, we explored the grounds where we found foundations (or footings) of more buildings.  From the building style, it was clear that these ruins were centuries old.

The History of Peebles Cross Kirk

In 1261, a cross and urn containing ashes were found on this site.  Believing it to be the cremated bones of St Nicholas, people started bringing offerings are praying here.  King Alexander III (r 1249 – 1286) was inspired to commission a church to be built on the site.

The church became a religious house for Trinitarian friars in 1474.  This order was founded to seek freedom for Christians captured during the crusades.  At this time, the cloister ranges and West tower was added.  This tower can still be seen today.  Cross Kirk was so important during this time (due to the religious relics) that an annual feast was established in 1530, to celebrate the original finding of the Holy Cross of Peebles.

The Impact of the Reformation

As with all religious organisations at the time, the Reformation of 1560 had a great impact on the Cross Kirk in Peebles.  At this time, the Friary became a parish church.  To make the kirk more fit for Presbyterian worship, several changes were made in 1656.  The chancel was abandoned and a new gable was constructed where the chancel arch once was. They also inserted galleries and added three burial aisles – two to the South (Erskines Aisle and Venlaw Aisle) and one to the North (March Aisle).

The Decline of Cross Kirk

Peebles Cross Kirk remained a pilgrimage centre until the early 1600s. Thereafter, however, neglect set in. By 1666, the cloister buildings were used to house plague sufferers and by the early 1700s it was used as a school.

In 1784 though, the Cross Kirk was abandoned and the roof removed.  At this stage the site was only used for burials.  Sadly, by 1796 most of the cloister buildings have disappeared.  By 1811, much of the South wall of the kirk had fallen down as well.

In 1925, Peebles Cross Kirk was taken into State care.  It is still, despite all the ruin, the best-preserved urban friary in Scotland. 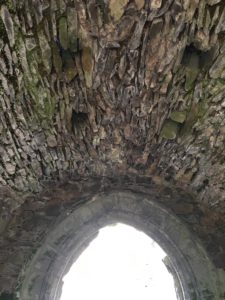 Vaulted Ceiling Under the Tower

The kirk was built from whinstone with buff sandstone dressings.  It is a simple rectangle with thick-walled, vaulted vestry to the North.  The West tower was five storeys high and the ground storey has a barrel-vaulted ceiling.

The 13thcentury West doorway is now the most significant architectural feature surviving.  We also spotted a lintel above a doorway, dated 1656.

There is still much to see in the ruin.  The roofless nave of the church with its West tower is still standing.  The burial aisles are still there.  The grassy site of the chancel and the footings of the cloister buildings are still clearly discernable.  Peebles Cross Kirk is a delight to visit and explore.