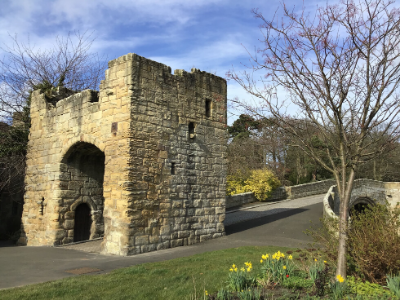 After a delightful visit to Warkworth Castle, I decided to make a short detour and explore the medieval Warkworth Bridge at the Northern end of the town.   Even today it strikes a powerful picture.  I can just imagine how daunting this bridge would have been for invading forces in medieval times.  The thing is:  during the Middle Ages, the only way into Warkworth from the North, was over this bridge.

The History of Warkworth Bridge 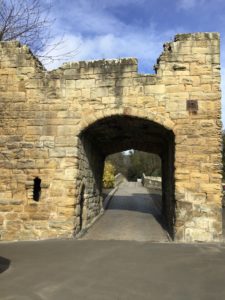 It seems there was an earlier bridge, but nothing is known of it and nothing remains. The current medieval bridge (crossing the River Coquet) was constructed after John Cook of Newcastle (died 1379) left 20 marks towards the building of the bridge.  His only condition was that the bridge be built within two years. This must have been the case, because the bridge is very much there!

It seems the bridge was always manned.  It was in the charge of wardens from at least the 15thcentury and a Bridge Master is recorded in 1726.

In 1929, the Warkworth medieval bridge was listed as Grade II.  In 1965 a new bridge (immediately to the East) was opened to traffic.  The medieval bridge can now only be accessed by pedestrians.

The bridge crosses the Croquet River and has a defensive fortified tower at its Southern end.  In fact, it is believed that Warkworth Bridge is the only surviving fortified bridge in England! 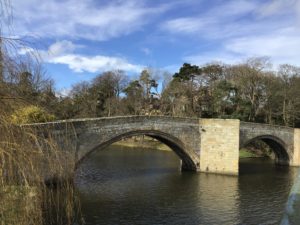 The bridge is 61m long and 3.5m wide.  It has two segmental, ribbed arches separated by a central pier with cutwaters.  Each arch spans 18.4m.  The riverbed beneath the bridge has been paved with stone to prevent erosion of the foundations.   At the South end, two wing walls extend several meters – the East wall extends 19m and ends in a stone pier, while the West wall is 18m long and links to the defensive gateway.

The defensive gateway tower is a rectangular structure measuring 8.3m by 5.5m and a height of about 8m.  On the West side of the tower (under the arched gateway) is an arched opening with studded door.  This leads to the guard chamber.  The chamber itself measures only 3.7m by 1.9m (rather cramped!) and has a stone bench on the North wall.

On the East side of the gateway is another door, leading to a spiral staircase that provided access to the upper room.  This upper room was 6.85m by 4.7m in size.  It had (in the bridge’s heyday) windows that gave one views in all four directions.  Sadly, these are now in ruins and the entire upper storey is roofless.  Traces of the windows can however still be seen.

The entire structure is built of squared and coursed sandstone.

This bridge must have provided local residents with great peace of mind.  It stands solid – protecting the town from anything the North can throw at it.