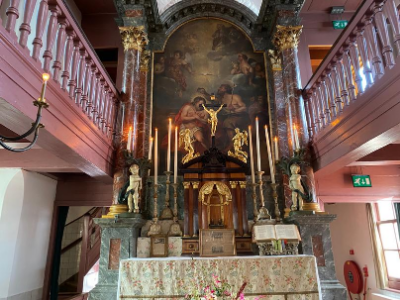 I’m off to explore a historical secret!  This has been on my bucket list for a while, so I’m very excited to be able to go on this excursion.  The secret?  A Catholic Church hidden in the attic of a residential house in the heart of Amsterdam.

Let me explain a bit of background, here.  It will help make clear why the church was a secret and also why it was hidden in an attic. 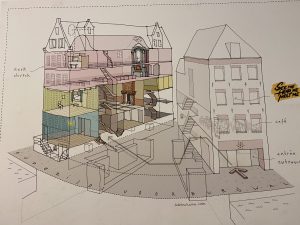 Drawing of Church in the Attic

During the 16th century, a major religious movement within Europe also touched the Netherlands.  At this time, Europe was controlled by the Roman Catholic Church but Protestantism started to take spread and take root.

The Alteration of 1578 resulted in Amsterdam’s Catholic government being deposed in favour of a Protestant one.  This of course, lead to a major change in how churches were used.  Catholics were banned from attending church (in public, anyway).  Catholics have been worshiping at De Oude Kerk in Amsterdam for a very long time, but now, after 1578, they were no longer able to do so.  De Oude Kerk became Protestant.

In line with typical Dutch tolerance though, Catholics were still able to worship in private.  And so “schuilkerke” or “clandestine churches” were born.  These were private churches inside residential houses.

A wealthy Amsterdam merchant, Jan Hartmann was a devoted Catholic.  He decided to convert his attic into a fully functional church in 1663.  This House Church was changed into a museum in 1888 (Ons’ Lieve Heer op Solder) – Our Lord in the Attic.  Mass is still performed here on a regular basis.

Exploring the Church in the Attic

The entrance to the museum is at the house next door to Jan Hartmann’s house.  I needed to book my ticket in advance (due to Covid-19 regulations) and arrive at my scheduled time slot. 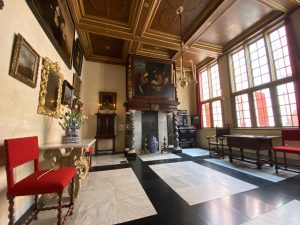 From the entrance, we walked down a steep set of stairs and then through a tunnel (underneath the road) and up another set of stairs.  We were now in Jan Hartmann’s house.   After a short documentary film, we started exploring.

The first two floors are typical of a 17th century merchant’s house.  There are front rooms, two kitchens and several other rooms.  Lots of fantastic art is on display throughout the museum.  In one of the kitchens, we looked at many ceramic pots, cups and bowls which were found in an old cesspit under the house during a 2013 excavation.  Apart from the hidden church, this house has a great deal to offer the historian!

The church was accessed via a fake door hidden in the living room.  Up another set of very steep, narrow stairs we arrived in the church.

The size is surprising – much larger than I expected.  Long and narrow.  And the most stunning Baroque altar dominates the far side of the church.  Looking up, there are two levels of galleries and then I noticed something else.  Across the room, from one gallery to the other (on the opposite side) are metal bars.  These are metal ties holding the building together.  When the church was created, they had to literally cut through the original beams in the attic, thus weakening the structure.  The solution was to install these ties. 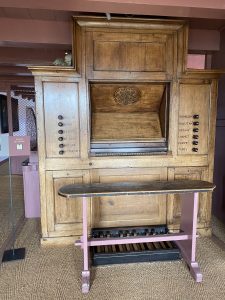 The Organ of the Church

And then of course, there is the altar.  This was added to the church around 50 years after it was created.  A massive altarpiece, depicting Jesus being baptised by John the Baptist, towers over the space.  Above it, is a stucco image of God and the Holy Spirit.  Magnificent pillars round it all off.  The interesting thing about these pillars, is that it is not marble (even though it looks like marble).  It is in fact made of wood and painted to look like marble.

There is another secret within this secret church.  At first glance it looks like there is no pulpit – but there is 😉.  And this fascinated me – I do love brilliant design.  The pulpit “folds up” into the left-hand side pillar!  When it is folded away, one would never suspect that it is there.  It is however a full-size pulpit, hidden inside the pillar.  To the left of the pillar is a small digital screen with a video showing how the pulpit unfolds – do not miss this!  It is absolutely awe-inspiring.

One more thing not to miss:  Go up to the gallery and stand to the left of the altar.  When one looks out the window on that side of the room, one can see De Oude Kerk – literally the “past” for this church.  Now turn around and look out the window on the opposite side of the church.  One can see St Nicholas’s Church – the “future” of this church.  This church in the attic was created after Catholics were banned from De Oude Kerk (thus the past) and when Catholics could worship in the open again, St Nicholas was built (thus the future). 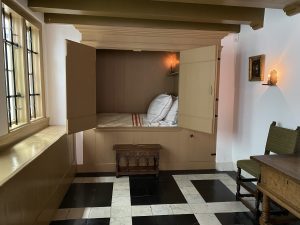 Behind the altar, are several more rooms.  This includes the Maria Chapel, vestry and the confessional.  There is also the private quarters of the resident priest, with built-in box bed.  Looking at this bed made me feel rather claustrophobic!  It has doors which will make me feel very uncomfortable if I had to sleep there.  Also, it is rather small – I can’t see how an average-height person can sleep there, fully stretched out.  🤔

The first priest here, was Petrus Parmenteer – there is a painting of him in the hallway.  Petrus was told that he could live there for the rest of his life.  But then the house owner passed away and left a heap of debt.  This meant that Petrus was sadly booted out.