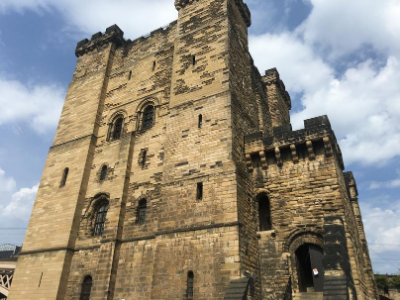 This is such a good example of how disappointment can turn into shear joy when history exploring.  Let me explain.  It was a very hot August day, but I decided to cycle into Newcastle to visit (again!) the medieval St Andrew’s Church.  I love visiting this peaceful place in the heart of the city, so it was a great disappointment when I found it locked!  It turns out the church is closed on Mondays 😔

So, I decided to cycle on to St Nicholas Cathedral – I’ve always wanted to explore this historical place.  But again, it was not to be.  The Cathedral is undergoing massive restoration and I could thus not gain access.  Bummer!

A bit deflated, I sat down in front of the Queen Victoria statue, wondering where to explore.  And then I thought about the Newcastle Castle Keep.  Lightbulb moment!  I have visited the Castle before but never wrote about it, so I thought another visit would be in order.

A short cycle towards the River Tyne brought me to the Castle.  And then I remembered:  we are still very much under Covid-19 restrictions and most historical sites only allow advance ticket booking.  Crikey!  Will I be able to get in?

Early History of the Castle

This site has been a defensive location for a very long time – mainly to defend the river crossing, at first.  The Romans built a bridge over the River Tyne in the mid-2nd century and a fort to protect it.  At that point in time, the settlement was called Pons Aelius (Bridge of Aelius) but at some point later (during the Anglo-Saxon age) the area became known as Monkchester. 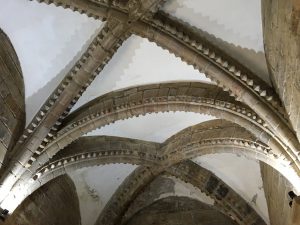 Magnificent Vaulted Ceiling in the Chapel

Robert Curthose (eldest son of William I) was sent North to battle the Scots in 1080.  At the end of this campaign, they realised the importance of Monkchester as a defensive position (the Scots were an unruly lot who ventured across the border regularly to plunder).  Robert ordered the construction of a motte-and-bailey castle.  This was a wooden tower on top of an earthen mount (motte), surrounded by a moat and wooden stockade (bailey).

This was Robert’s “New Castle upon the Tyne”, becoming known as Newcastle-upon-Tyne.

Between 1172 and 1177, this wooden structure was replaced by a stone keep on the orders of King Henry II. The cost of this construction was £1444.  A few years later (1247 – 1250) the great gateway was built, becoming known as the Black Gate.  Further protection to the castle came in the form of stone walls – (with towers) being built around the entire town in the 13th century.  The medieval town walls, Black Gate and Castle Keep kept the inhabitants of Newcastle fairly safe, for most of the time.

Up the steep stone stairs and through the massive wooden door, one researches the Castle’s Royal Chapel. What a magnificent room!  The first thing to catch my eye, was the very impressive vaulted ceiling.  Spectacularly high and beautifully constructed.  The Chapel consists of the Chancel and a Nave (the latter being rather small).  This chapel was used by royalty when in residence but when the King was away, the priest would use this space to say prayers for the souls of the royal family. 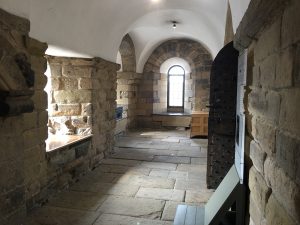 Solar with Garderobe around the corner

From the chapel, a narrow passageway leads to the Cellar.  This is where provisions were kept for the Castle’s inhabitants.  Bear in mind that a lot of food, weapons and other things needed to be stored for the times when the city was under siege.  And water!  They would have been lost without water.  So, the Cellar was equipped with its own fresh water supply – a lead pipe runs down along the central pillar and would have originally had a wooden tap.  This pipe supplied water directly from the Well room.

The Cellar was used, in later years, as a prison.  As a very secure part of the Keep, it was the best place at the time, to hold prisoners.  On display in here, are a set of stocks as well as a pillory – used to shackle prisoners’ hands / feet and head.

Several more passageways, stairs and rooms later, one finds one of the Castle’s Solars.  This is the private chambers of one of the officers of the Keep.  A Solar was a complete, self-contained suite which included its own garderobe (toilet) and fireplace.  The officer would have used this room as his bedroom, office and meeting room.

Understanding the Construction of the Castle 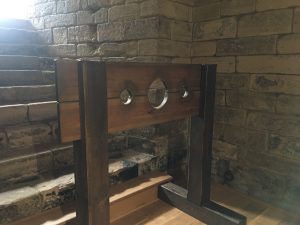 Pillory on display in the Castle Keep

The next room is very interesting.  Well, all the rooms are interesting!  But in this one, the history explorer can learn a great deal about the construction of the castle.

There is a huge display with lots of information, showcasing how exactly Maurice, the Master Mason designed and built he castle.  On one wall, are the coats of arms of some of the baronies which were required to provide “Castle Ward”.  This meant they had to send knights to garrison the castle.

I strongly urge you to take the time to read all on offer here.

The Great Hall was the heart of the Keep.  Here, meetings were held, feasts celebrated, and conversations were had.  And of course, this was where law and order presided.  The Great Hall was where the High Sherriff of Northumberland held his court.  Minor crimes like tax evasion (yes, even in the Middle ages!), gossiping, drunkenness and animal theft would have been dealt with here.  The Sherriff would pronounce sentences including fines or public humiliation (being put in stocks or pilloried).

Two or three times per year, the Great Hall also hosted the Assizes Court.  These courts were overseen by a Royal representative and heard more serious crimes, such as murder. 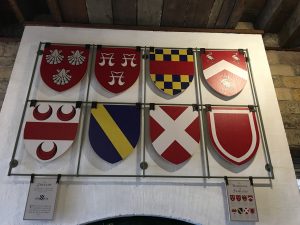 It is a spectacular room!  The vaulted ceilings feel incredibly high and the massive wall hangings are an imposing sight.  There are two entrances to the Keep’s Great Hall – one for common people via steep, narrow stairs and the second is a much grander wooden door for more important people.

From the Great Hall, there are several passageways leading to other rooms.  The first one I explored led to other solar (again with private garderobe).  There are beautiful old chests on display here.  A second passageway led to the Well Room.  I found this very interesting – the engineering is remarkable.  A 99-foot deep well can be accessed here (one can still look down the well, full of water).  On either side of the well, are stone basins.  Water could be collected from the well and then poured into these basins.  Lead pipes then transported the water to various places within the Keep. 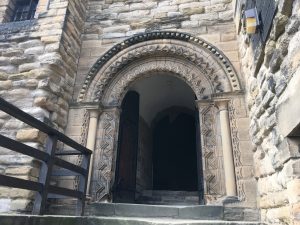 Grand entrance to the Great Hall

Finally, I explored the last passageway.  It very much looks just like another solar (with private garderobe), but then I realised this space is much smaller and darker than the other solars in the Keep.  The slit window is tiny, and the arched ceiling quite low.  This was a prison cell.  But clearly a prison cell like no other – it’s location so close to the Great Hall implies it was for prisoners of higher standing.  In fact, one notable prisoner was Mary Bruce, sister of Robert the Bruce.  Mary was imprisoned here, in this room, from 1310 until 1314.

After leaving the Keep, I walked over to the Black Gate to continue my explorations which I’ll talk more about in another blog.