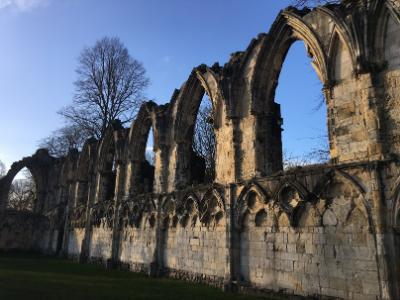 On a quick, work-related trip to York in December 2020, I took the opportunity to walk through the Museum Gardens.  With many restrictions in place due to Covid, I thought it safer to explore an outdoor setting while I waited for the train back to Newcastle.  And what a wonderful setting it is!

The gardens itself is peaceful with lots of birds and squirrels to keep one company during a relaxing walk.  With the River Ouse on my left and the museum on my right, I made my way across the gardens towards the ruins of St Mary’s Abbey. 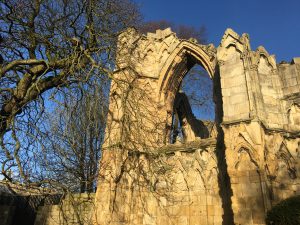 The original church on the site was founded in 1055 and dedicated to Saint Olaf II of Norway. After the Norman Conquest the church came into the possession of the Anglo-Breton magnate Alan Rufus who granted the lands to Abbot Stephen and a group of Benedictine monks from Whitby. The abbey church was re-founded in 1088 and a year later the foundation stone was laid, and it was rededicated to the Virgin Mary.

Dispute Amoung the Monks

It seems the monks had a “relaxed” view of their monastic vows and people in the town were not always happy with their conduct.  Some monks agreed with the people of York.  The unease grew and in 1132 it burst into a full-scale riot.

A prior named Richard, with 13 other monks demanded the monks at St Mary’s properly observe the Benedictine Rule.  This did not go down well with the result that Richard and the 13 monks left.  They moved to Fountains, 30 miles away, and established a new Cistercian monastery there.

In 1137, a great fire severely damaged St Mary’s Abbey.  A rebuilding program was started in 1271 under direction of Abbot Simon de Warwick and was completed in 1294.  The current ruins date from this era. 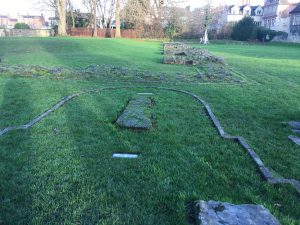 The completed Abbey Church was 350 feet in length and had a nave with aisles, North and South transepts with chapels and a presbytery with aisles.

At this point (in its hey-day, as such), the Abbey composed of 40-60 monks under an Abbot, plus 50 students in the minster school, plus a whole host of servants.

St Mary’s Abbey was the richest Abbey in the North of England, and very powerful.

Being incredibly rich and owning huge amounts of land in Yorkshire, St Mary’s was a prime target for Henry VIII during the Dissolution.  Its lands were worth £2000 per year in 1539, which is over £1.35 million in today’s money.

Sadly, this once-magnificent Abbey is now in ruins.  Parts of the North and West walls are still standing, and some foundations can still be seen where the North Transept once stood.

In the gardens one can find a few stone coffins, hidden in the trees and bushes.