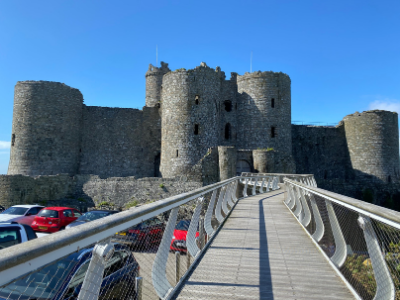 Attacked, robbed and “despoiled”, Queen Margaret (1430 – 1482) was in fear of her life and that of her son, young Prince Edward.  Not only did she lose all her goods and money (around £6600), but it is also believed this injustice was perpetrated against her by one of her own servants!  She needed to flee.  She needed a safe haven.  And this she found at Harlech Castle.

Thankfully, we had a much more relaxed trip to Harlech.  No attacks, no robberies 😁. Just a slow drive through the beauty and tranquillity of the Snowdonia National Park.  Arriving in the town, we parked on the High Street at first, not knowing exactly where to go.  As always, a coffee shop was first on the agenda.  On the square, we found coffee and, crucially – information.   We were told where we could find two large parking areas, where all the interesting little shops were and of course, where we could find good food (always a priority!).

The little town is an absolute delight to explore.  Lots of tiny shops with unique offerings, stunning views over Tremadog Bay, the steepest street in the UK (Ffordd Pen Llech with a gradient of 37.45%) and of course, Harlech Castle. 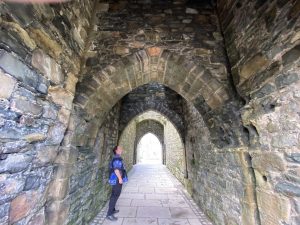 Inspecting the Murder Holes in the Gatehouse

We entered the Castle via a modern metal bridge (over the defensive ditch) and through the magnificent gatehouse on the Eastern side of the Castle.  The gatehouse is truly impressive – high towers and thick walls. And then we walked through into the inner courtyard and it took my breath away.  Majestic.  That is the only word I can use to describe this Castle.

Harlech Castle was built in a fairly square shape, with thick walls all around and huge, round towers on each corner.  All of this survives to almost full height which makes it easy to feel the power and dominance Edward I wanted to create here.

The Gatehouse has four towers too – two protruding from the East wall and the two on the inside of the inner ward.  This would surely have been impregnable in the Middle Ages!  The entire Castle was originally also surrounded by a second (outer) wall and a steep ditch on the Eastern side.  No wonder queen Margaret felt safe here.

Why was Harlech Castle Built?

King Edward I have been battling the Welsh for years.  After the second Welsh war, he decided to impose his authority in Wales, once and for all.  He thus resolved to build several Castles in North Wales – Harlech, Caernarfon and Conway among them. 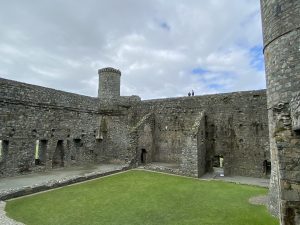 Works started at Harlech in the Spring of 1283.  Masons, carpenters, ditchers, stonecutters, charcoal-burners and many other craftsmen were drafted in from English counties as far away as Yorkshire, Northumberland and Norfolk.

All of this of course came at a huge cost.  As an example, between April and November 1285, more than £205 was spent just on digging the ditch in front of the Castle.  More than £186 was paid to smiths to make and sharpen tools.  In fact, in 1287 the wages of workmen at Harlech nearly equalled the combined total in that same year for the much larger castles and town walls at Caernarfon and Conwy.

Even before the works on the Castle were complete, King Edward I decided to appoint a constable to command a garrison at Harlech.  The Welsh were still very troublesome, and he needed to protect his land.  Harlech was to have 30 fighting men, which included ten crossbowmen, a chaplain, an artiller, a blacksmith and other officers. 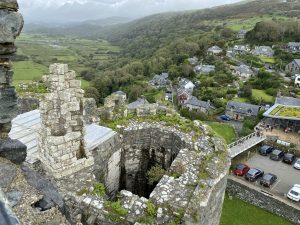 The view from the top of the Gatehouse at Harlech Castle

By the winter of 1294, Edward’s new castles were severely tested.  Large parts of Wales rose in rebellion and Harlech needed to stand firm against attack.  Due to its location in the mountains, Harlech could only be resupplied by sea directly from Ireland.  This was done and finally a relief force arrived in mid-December.  Harlech Castle stood firm and the walls were not breached by the Welsh through-out this crisis.

Through-out the 14th century, Harlech Castle was neglected and became quite ruinous – certainly no longer fit for a king to stay over.  Probably the only instance of a king staying at Harlech (outside of the reign of Edward I), occurred in early August 1399 when King Richard II visited Wales to drum up support against his challenger Henry Bolingbroke who later became King Henry IV.

On 16 September 1400, Owain Glyndwr was proclaimed Prince of Wales.  This was the beginning of a nationwide rebellion against English rule.  As a century earlier, Harlech’s remoteness was a problem for Henry IV.

Henry IV sent his son (the future King Henry V) to relieve the castle.  Expeditions in 1401, 1402 and 1403 all failed and in early 1404 Harlech Castle finally fell to the Welsh forces.

Prince Owain set about a new government for Wales – plans for two Welsh universities, a treaty with France and an archbishopric for St David’s – all followed swiftly.  In August 1405, he held a parliament in Harlech Castle (again showing the importance of this castle).

The next few years were however a bit more challenging for Prince Owain.  Renewed campaigns by the English between 1407 and 1409 saw the fall of Harlech Castle, back into English hands.  Heavy cannon bombardment was used to batter the Welsh garrison into submission.  Owain’s wife and two daughters were found sheltering inside.

Harlech Castle During The War of The Roses

During the War of the Roses (1455 – 1485), Harlech Castle again played a major role.  In March 1461, the house of York defeated the house of Lancaster, putting Edward IV on the English throne.  Harlech Castle however remained loyal to the Lancastrians under the leadership of Welshman Dafydd ab leuan ab Einion.  (Remember Queen Margaret seeking safety at Harlech Castle, earlier in this blog?) 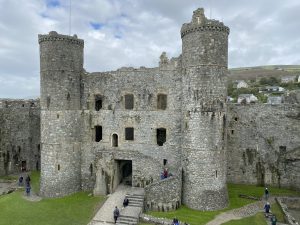 Gatehouse seen from the inner courtyard

For the next seven years, Harlech was an isolated Lancastrian outpost.

In 1468, William Lord Herbert of Raglan marched on Harlech with an army of 10 000 men.  He bombarded the castle with cannon and after a month’s fighting, the garrison surrendered on 14 August.  Harlech was finally under Yorkist control.

As a sidenote, it is believed that these men who defended Harlech during the siege of 1468, are commemorated in the song “Men of Harlech”

Men of Harlech, march to glory,
Victory is hov’ring o’er ye,
Bright-eyed freedom stands before ye,
Hear ye not her call?
At your sloth she seems to wonder;
Rend the sluggish bonds asunder,
Let the war-cry’s deaf’ning thunder
Every foe appall.

– Extract from the Men of Harlech song

In 1642, Civil War erupted.  On the one side were supporters of King Charles I and on the other side, supporters of Parliament.  Harlech Castle, like the other Northern Welsh castles, stood firmly on the side of Charles I.

From April 1646, Harlech Castle was besieged for almost a year by Parliamentarian forces under Major-General Thomas Mytton.  Finally, in March 1647, an honourable surrender was negotiated, and the Castle’s soldiers marched out of the castle.

This was the last time Harlech Castle served a military role.

What Not to Miss When Visiting Harlech Castle