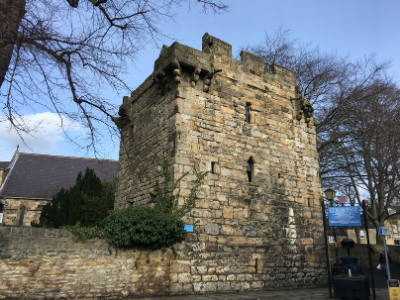 Located in the North-East of England, Corbridge saw its fair share of violent attacks during the Middle Ages.  The Scots often ran amok in the area, bringing death and destruction.  It is no surprise then, that a defensive structure was built in this little town.  And I wanted to know more.  So, on a crisp Sunday morning, I drove along the A69 to Corbridge.  It was time for a bit of history exploration 😉

I love a town with a square!  There is something truly inviting and community-orientated about a town square.  A sort-of centre point for inhabitants and visitors alike.  Corbridge has a lovely town square with its medieval church, little teashops, bakeries and a whole host of other interesting shops to explore.  And the Vicar’s Pele Tower, of course.

Due to Covid restrictions, I was unable to explore the inside of the Pele (which is now the home of a micro-brewery), but I took the opportunity to have a proper look around the outside.

Arched door into the Pele Tower

William Wallace made his way across the border from Scotland in 1296 to sack and burn Corbridge.  In 1312, Robert the Bruce did exactly the same and in 1346, David II of Scotland again ventured South and attacked the little town.   It was clear that the inhabitants of Corbridge needed some form of defensive structure to protect themselves against the rampaging Scots.

Early in the 14th century, construction started on the Pele Tower (it was the first of its kind to be built).

The Vicar’s Pele Tower in Corbridge was not only a residence for the local vicar, but also a place of protection for the inhabitants of the town.

Construction of the Vicar’s Pele Tower in Corbridge

The Pele Tower is a three-storey defensive structure with one room on each floor.  It is rectangular in shape, measuring approximately 8.3m by 6.4m and stands about 9 meters in height.  It is located directly next to St Andrew’s Church, on the town square.

Building material used is mostly sandstone, upcycled from a nearby Roman fortress.  The walls are four feet thick and there is only one entrance at ground level.  The tower’s upper level includes angle turrets and a parapet.  The windows in the tower mainly comprise of small, chamfered loops with the addition of larger trefoil-arched lights at first floor level.

Later History of the Pele Tower

The tower remained as a vicarage until the 17th century but was then abandoned.  An illustration from around 1830, shows the Pele in ruinous state without a roof.  In 1910, the Duke of Northumberland restored the Pele and re-roofed it.

During 1969, it was listed as a Grade I building, and in 1987, the Pele served as a Tourist Information Centre.  In 2013, the Cutler family bought the structure and did further restoration work.  The Pele Tower currently houses a micro-brewery.