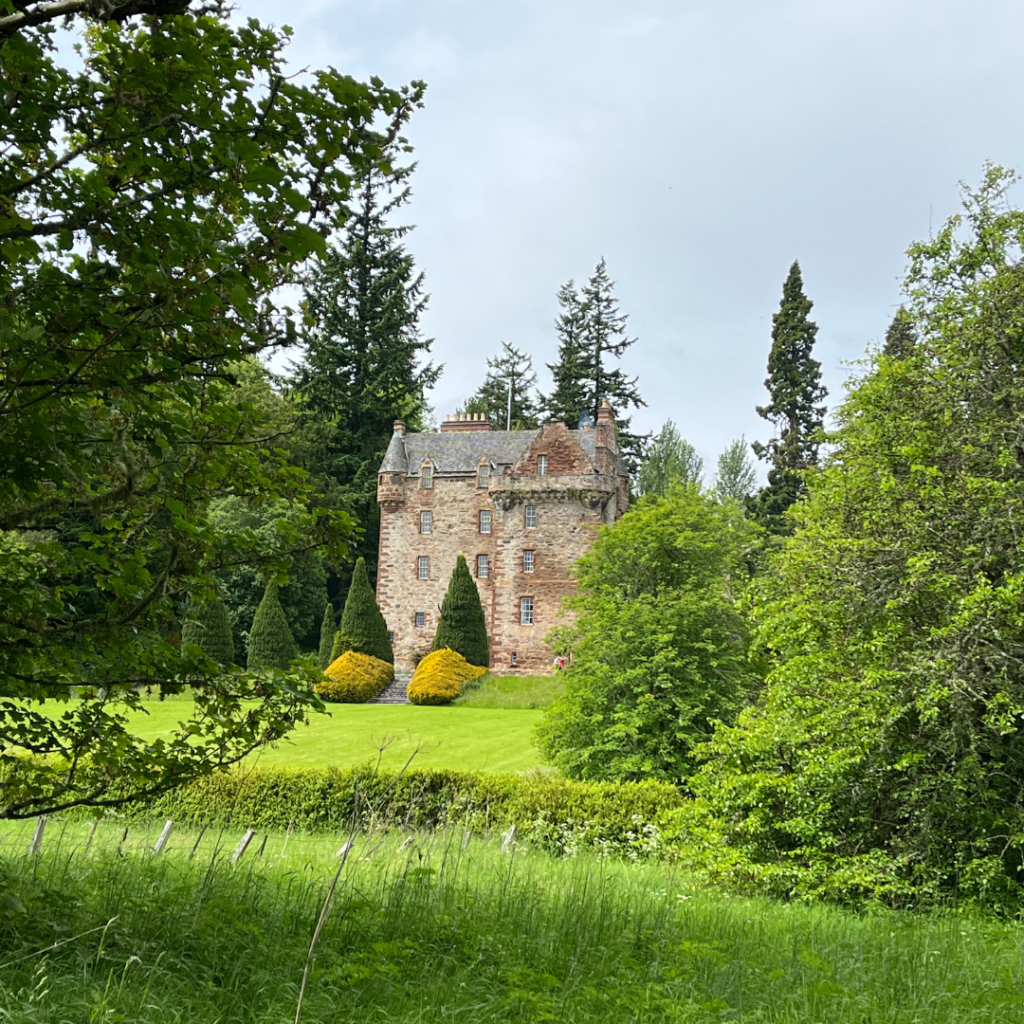 I never need an excuse to explore a castle.  So, making the trip North to the Scottish Highlands to visit Castle Leod, was no hardship.  And, in the case of Castle Leod, we had another reason to visit – Castle Leod is the seat of Clan MacKenzie – and my partner is part of this Clan.  So, there was a more personal impetus to experience Castle Leod.

Castle Leod is surrounded by heavy woodland. Massive old trees stand proudly guarding the old Castle – some planted centuries ago.  In fact, one Spanish Chestnut tree is a bit of a record-breaker, having been planted in 1553 to mark the granting of the land by Mary Queen of Scots to John of Killen.  This was the earliest recorded planting of any tree in Britain.

Driving up a narrow path from the main road, one passes an entire row of magnificent, leafy trees.  And then the Castle comes into view, to the left.  It is a splendid example of early modern architecture.

We were warmly greeted at the entrance to Castle Leod, by the MacKenzie Clan Chief, John MacKenzie, 5thEarl of Cromartie.  He still lives in the Castle, as his family before him had done for the past 500 years.  Castle Leod is one of the few castles in Scotland still lived in by the same family for hundreds of years. 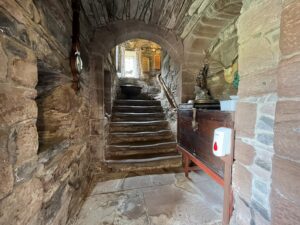 The MacKenzies began to move east from Kintail in Wester Ross after the battle of Harlaw in 1411.  Initially the Clan built a “crannog”, a fortified stone hut, on nearby Loch Kinellan as a defensive base.

The earliest known Mackenzie chief to have used Castle Leod as a base was John of Killen. It has remained in the family ever since. At first John rented Castle Leod from the Mowat family but he was granted the titles of the land by Mary Queen of Scots in 1553.

John’s grandson Colin MacKenzie, 12th Chief of the Clan had two sons. The elder, Kenneth, became Chief (known as Kintail), and the younger, Rory, inherited Castle Leod. Rory became de facto Chief when his brother died. He was his nephew’s guardian and thus became known as the Tutor of Kintail. He was a fearsome man who greatly expanded Clan territory for the Mackenzies.

It was Rory MacKenzie who, in 1605, started converting Castle Leod into a grander residence.

The Jacobite Uprising of 1745

George MacKenzie, 3rd Earl of Cromartie was, as all MacKenzies, a strong supporter of the Stuarts.  With his 18-year-old son, John, he raised a force of 400 MacKenzies and fought at the Battle of Falkirk in the frontline. Father and son were ultimately in charge of the Jacobite forces north of the River Beauly. Disaster followed. The Countess of Sutherland who, unlike her husband, was an ardent Jacobite, entertained the Earl and his son to a final glass of wine at Dunrobin Castle before they re-joined their troops to march south to Culloden. However, Hanoverian soldiers burst into the room and, though she tried to hide the Earl under her skirts, he was captured in what is still called “The Cromartie Room”. The now leaderless Mackenzies were ambushed and taken prisoner at the Battle of Meikle Ferry together with John McKenzie, the Earl’s eldest son.

George MacKenzie was charged with treason and sentenced to death by public execution. He was saved by the sheer courage of his wife, Isabella Gordon, and her father who was advisor to Frederick, Prince of Wales. She rode from Castle Leod, while heavily pregnant with her ninth child, to join her husband and son in the Tower of London. On presenting a petition to King George II, she fainted at his feet. George’s death sentence was commuted to life in exile, and he was never allowed to return to Scotland.  The title was attained and estates forfeit.

In 1777, John Mackenzie returned to Scotland and petitioned George III for the restoration of his estates in return for raising a Highland Regiment for the government. This offer was accepted, and he raised “MacLeod’s Regiment of Foot”, later to become the “Highland Light Infantry”.

In 1784, the family property was returned to John on payment of the enormous some of £19,000, the amount of debt incurred by the sequestered estates. John built himself a splendid new mansion, Tarbat House at Kildary and Easter Ross, which became the family’s main residence.

On his death, the estates passed to his eldest sister, Isabella.

Castle Leod in the 19th and 20th Centuries 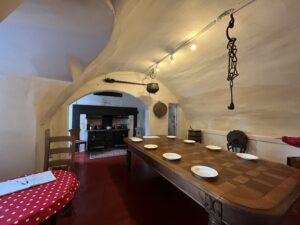 The estates eventually passed into the hands of Isabella’s grandson, John Hay Mackenzie. By 1814 he had made improvements to Castle Leod, replacing large sections of the roof, and remodelling the Great Hall in Regency style as it is today. It was John’s daughter, Anne Hay Mackenzie, who revived the family’s flagging fortunes through her marriage in 1849 to the Marquis of Stafford, who ultimately became Duke of Sutherland.

Anne was a close friend of Queen Victoria and became her Mistress of the Robes. As a personal gift to her, Queen Victoria recreated the family titles, an act almost unprecedented in the Scottish Peerage, and Anne became first Countess of Cromartie, Viscountess Tarbat, Baroness of Castlehaven and Baroness MacLeod in her own right.

Anne’s granddaughter, Sybil, inherited the estates after her father’s death.  She is the grandmother of the present Earl.

There is no record of when exactly Castle Leod was built.  The earliest surviving stonework can be found in the vaulted kitchen and dungeon.  This dates from the 14th century.

The present tower was constructed in the mid-16th century, with refinements added in the 17th century.

Rory MacKenzie is responsible for most of what we can see at Castle Leod today.  His alterations in the early 17th century included changing the plan of the castle to the square shape we can see now.  He also enlarged the windows and added a slate roof.

The beautiful front door also dates from Rory’s time, as does the “marriage stone” built into the wall above the door.  This stone commemorates his union with his wife.