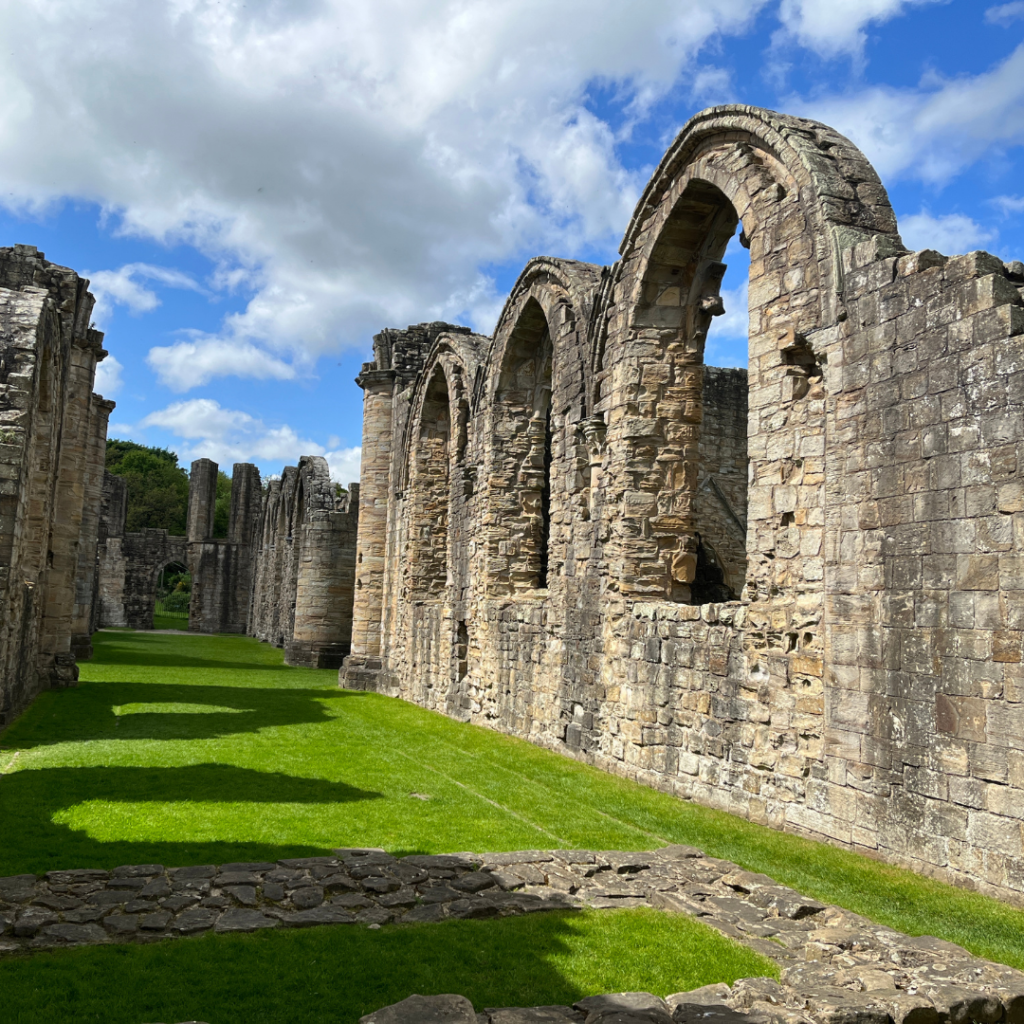 Finchale Priory in County Durham, Northern England has a long and interesting history – and it is incredibly beautiful to explore.  What started out as a tiny hermitage, turned into a magnificent priory and even a holiday home for monks.

It is here, in the crook of the River Wear, amongst leafy trees and peaceful surroundings, that we came to explore St Godric’s legacy.

Who Exactly Was St Godric?

St Godric, the man who first settled on this site, was born around 1065.  His early years were spent as a merchant and sailor.  He must have been quite a religious man from an early age, as he is known to have undertaken several pilgrimages.  We know he went to Jerusalem around 1102 and had contact with King Baldwin I there.

En route back to England, he also visited the shrine of Santiago de Compostela in Northern Spain, and he went to Lindisfarne as well.  Here he learned much about St Cuthbert and his life as a hermit.  This must have inspired St Godric, as shortly thereafter, he decided to become a hermit too.

Eventually, St Godric settled at Finchale and built a tiny hermitage on the banks on the River Wear.

About 25 years after St Godric’s death, Finchale was made a priory, dependent on Durham Cathedral. Building works were done in stages, as is the case with most such buildings. 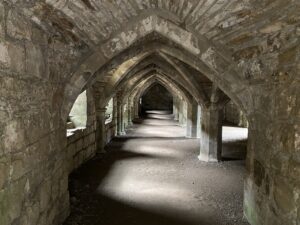 The Cellar with its vaulted ceiling

The first buildings were erected, east of the later church.  These provided accommodation for the first monks sent to Finchale.  Though ruinous, remains of these structures are still there to be explored.  It consisted of a domestic hall, solar, kitchens, warming room, and a few other rooms – possibly used as storage.  This was more than adequate for the needs of the few monks in the early years.

Only in the second quarter of the 13th century, were the rest of the priory built.

There were never many monks at Finchale, at any given time – the maximum being 15 in 1278.  By the 14thcentury, the priory took on a very different role; it became a holiday home for monks serving at Durham.  Only five monks were permanently resident then.  A further four monks would visit – on holiday – for three weeks at a time.  When they left after their holiday, another four monks would take their place.

This arrangement remained in place until the 1530’s, when Henry VIII closed all monasteries in England and Wales.

We started our tour of Finchale Priory on the East side, near the river.  This is where the remains of the earliest monastic buildings can be seen.  What makes this particular ruin so interesting, is the fact that remains of these very early buildings can still clearly be seen.  At most other locations I have explored, there are virtually no remains left from this time period.

It is fascinating to look at the footings of these structures.  Room sizes can precisely be measured, the craftmanship is evident in the stonework and it is easy to imagine how those first monks lived here.

We then ventured into the ruins of the Prior’s house.  These were clearly two-storey structures consisting of a hall, study, chapel and living room.  From records, we know that monks on holiday spent time here in the Prior’s house.  This is where they took their meals, although they slept in the dormitory.

From here we walked through the massive stone arches to the middle of the Priory.  This section of the structure was built in the 13th century.  The vaulted cellar below the refectory is a must-see!  The stonework is exquisite.  I felt an absolute calm down in the cellar – as if I was alone in the world with the thick stone walls protecting me.  It was a wonderful feeling.

The dormitory, kitchen, reredorter (latrine) and chapter house are all in this area of the Priory.

The Church at Finchale Priory

On the North side of the complex, we explored the Church.  This is an incredibly beautiful piece of architecture with massive walls, high arches, towering pillars, and beautifully traced windows.  This was the heart of Finchale Priory. 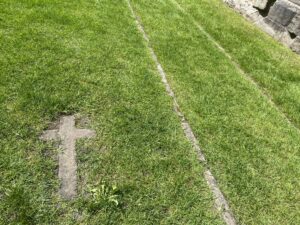 The cross marking the burial place of St Godric

The church is cruciform, 59m long and 30m across the transepts.  Three altars were in use, in the Priory’s heyday: the altars of St John the Baptist, St Mary and St Cuthbert.

The monk’s choir, with seats on either side, stood in the eastern arm, just east of the central tower.  East of this, is the presbytery, occupying the site of St John’s Chapel.  This chapel was 10m by 4.6m in size and some of its walls still stand a meter high.  It is believed that St Godric was buried here.  A cross on the ground, inside the chapel ruins, indicate the site of his burial.

The tower is interesting.  It had a stone vault at the level of the crossing arches – the only part of the church to have a stone roof, the rest being timber.  The tower stood on four cylindrical piers, which are all still extant.  In the north-west pillar, a staircase leads the way upstairs to an upper storey.

What Not To Miss At Finchale Priory

The entire complex that makes up Finchale Priory is a must-see.  However, if you are short of time, try to at least spot the following: