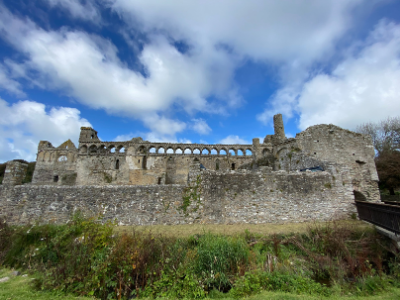 St David’s is rich in history.  And was certainly a very important destination during the Middle Ages.  In the 12thcentury, the Pope decreed that two trips to St David’s is equal to one trip to Rome – you can imagine how pilgrims flocked to this tiny city!  People still do today.

It was precisely because of this rich history, that we visited the city of St David’s in early September.  First, we explored the magnificent St David’s Cathedral and then worked our way towards the Bishop’s Palace.  Sadly, the site was closed but we managed to view quite a bit from the outside (even taking pictures stretching over the wall, like typical tourists!).

And it is still awesome, even in its ruinous state.  One can still see the vision and craftmanship that went into creating this Palace.

Palace Fit For a Bishop

Already in the 6th century, a monastery was established here.  It was however attacked frequently by Norse raiders and suffered greatly over the next few centuries.  With the arrival of the Normans in the 11th century, some stability came to the area.  The monastery was somewhat fortified, and a defensive wall built. 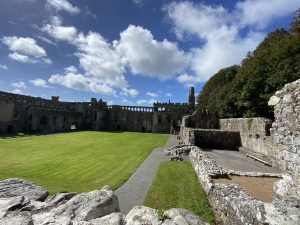 Bishop Thomas Bek, who served between 1280 and 1293, started rebuilding work at what is now known as the Bishop’s Palace.  He built a chapel in the south-west corner, a hall, private apartments and a gate.

But the one who really developed the site into a Palace fit for a Bishop, was Bishop Henry de Gower who served between 1328 and 1347.  He was a man of vision.  He was a man interested in dynamic architecture.  He was a man who wanted to impress visitors.  And this he did – and still do, today.

Even though he had grand ambitions for the Palace, he was careful in spending money.  The walls were raised in rubble and then covered with painted plaster, to look more impressive.  He did have expensive carved decoration, but these he saved for locations where it would have the most impact – doorways leading to the hall and of course, inside the chapel.

The east range was his private domain and the south range was used for ceremonies and where he dispensed justice.  Here too, is where he hosted great feasts and welcomed guests and pilgrims.

Impact of The Reformation 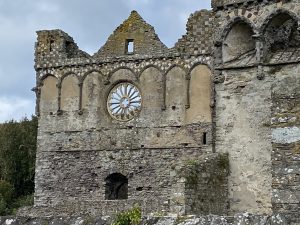 Magnificent round window at Bishop’s Palace

The Reformation was the start of a steady decline in the Bishop’s Palace.  In 1536, Bishop William Barlow stripped the lead from the roof, sparking the deterioration.  It is said that he made so much money from this, that it would have taken more than twelve years’ bishopric revenue to replace it!

The Bishop’s Palace fell into disrepair and by the middle of the 16th century the chief episcopal residence had been relocated to Abergwili.  In 1616, Bishop Richard Milbourne applied for a licence to demolish some of the buildings and by 1678, the Palace was considered beyond repair.

Under guidance of CADW, a restoration programme was completed in 2009.  Some walls were rebuilt, and damaged carvings repaired.

The site is still managed by CADW.