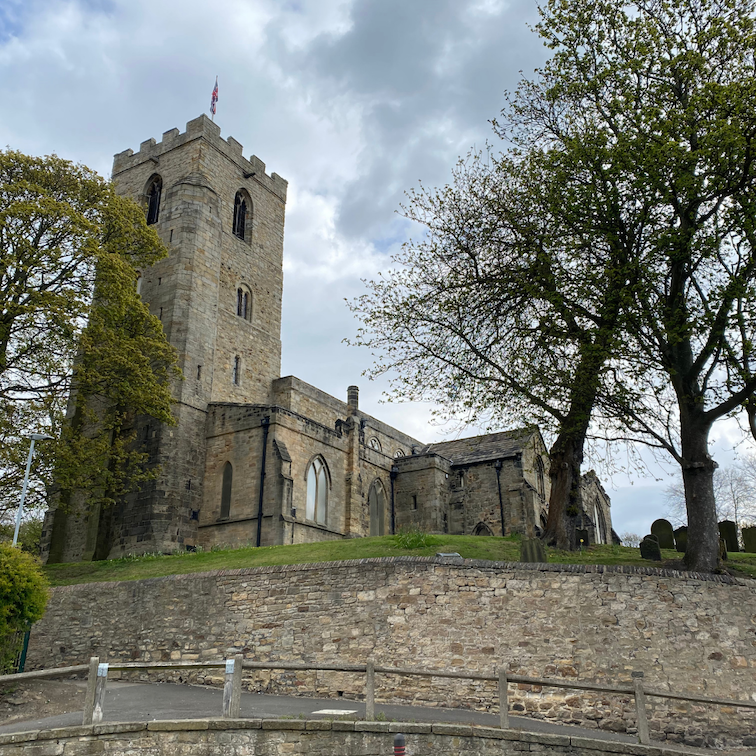 It is believed that St Andrew’s Church in Bishop Auckland is the largest parish church in the Diocese of Durham.  And it certainly feels it when you walk into this spacious, cruciform place of worship.

The first church was built on this site, around 650AD.  By 1100AD, a new church was constructed to house canons expelled from Durham, when the latter was made monastic.

The present church was built in 1274AD as a Collegiate Church.  It had a dean, twelve canons, and twelve vicars.

The structure they erected is large – 47 meters long and 25.5 meters wide, with the tower reaching 25.5 meters in height. 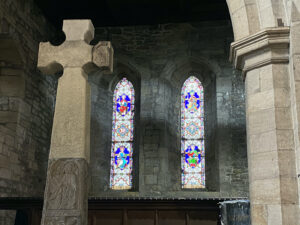 The first thing I saw as I entered the church was a massive stone cross standing tall, almost under the bell tower.  This is fascinating to look at.  Several large fragments of Saxon carved stonework (dated to 650AD) have been incorporated into the cross.  These fragments were unearthed in 1881 when the South Transept was rebuilt.  The carvings are spectacular – leaf scrolls with birds and animals and an archer shooting at birds.

Opposite the entrance, on the North wall, is a collection of medieval masonry (unearthed during building works over the years) as well as two life-sized effigies.  The first effigy is carved in dark oak and depicts a knight.  This dates from the 1320s.  The second effigy is of a female, thought to be part of the Bellasy family.  This was carved in stone.  Both are beautiful!

In the Chancel are double rows of choir stalls worth a closer look.  The upper row is medieval and has stunning misericords carved with foliage.  These date from the episcopacy of Cardinal Langley in the early 15th century (one misericord bears the arms of Cardinal Langley).

Above the entrance porch is a Parvise.  This room was used centuries ago by the Sacristan or Curate, who used it as living quarters.  A little window to the Parvise is still visible.  Above this window is a beautiful sundial dating from 1749. 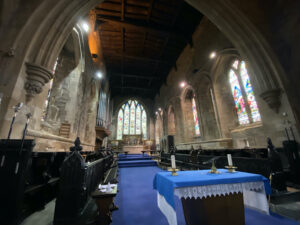 A closer look at the bell tower reveals an unusual structure on its SW corner.  This is a spiral staircase leading up to the bell chamber, but instead of being located inside the tower (as in most churches), this one seems to have been “tacked on” to the building.

The churchyard itself is slightly overgrown but still pleasant to explore.  Some graves date from the 17th century.