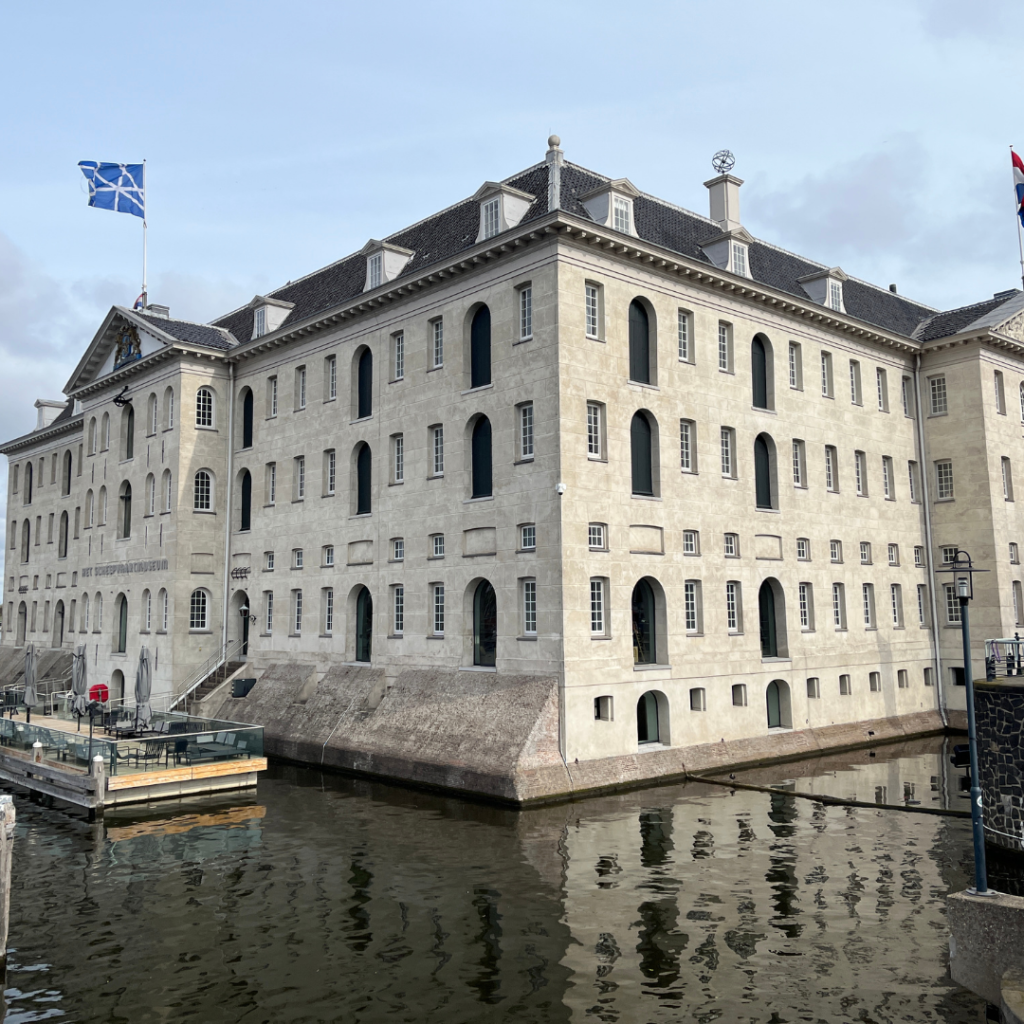 “Water Connects Worlds” – A great motto for a maritime museum.  And, if you think about it, it is very true.  The Dutch have been pioneers in international trade and seafaring throughout the Middle Ages.  And Amsterdam was often right in the middle of it all.  So, I thought I had better learn more about the history of seafaring in the Netherlands – and what better place to do just that, than the Dutch National Maritime Museum 😉

Getting to the Dutch National Maritime Museum

The Maritime Museum is a short, 20-minute walk from Central Station in Amsterdam.  We took a slow wander East, along Prins Hendrikkade, admiring the stunning architecture along the way.  On our left, we saw a massive green building – the Nemo Science Museum – and then the beautiful old sailing vessel, docked in front of the Maritime Museum.  We knew we were in the right place 😉

Public transport in Amsterdam is very efficient.  If you don’t fancy the walk, just hop on a bus!  Both the number 22 (Muiderpoortstation) and number 43 (Borneo Eiland) depart from Central Station and will drop you off close to the Maritime Museum.  You may want to buy an Amsterdam Public Transport Ticket online – it gives you unlimited travel around the city. 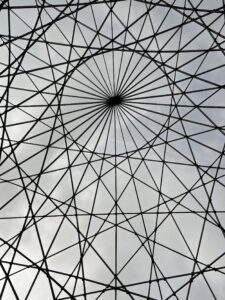 Roof of the National Maritime Museum

The museum building itself is a massive square.  Four sections are built around a central courtyard.  And just look at its roof!  It is a masterpiece of architecture with its web-like design, inspired by the compass lines on old nautical charts.  Its self-supporting construction is made up of thousands of pieces of glass in a metal frame.

The museum is housed in the old Arsenal.  It was built in the seventeenth century, when Amsterdam was the largest port and marketplace in the world. Goods from all over the world could be bought right here.  Since 1973, the building has been home to the Maritime Museum.

There is a café and giftshop in the building and several little tables and chairs in the courtyard, where one can enjoy a coffee and cake.

What to see in the National Maritime Museum

In the North Wing, the museum displays a variety of exhibitions.  At the time of our visit, there was a hugely informative exhibition of father and son Willem van de Velde; two leading marine artists from the 17th century.

In the Main Gallery, they are displaying over fifty masterpieces from the museum’s collection. “Republic at Sea” tells the remarkable story of the Netherlands as a maritime nation.

And then there is my personal highlight of the day.  Stepping outside, we got a closer look at the sailing vessel we spotted on our way to the museum. 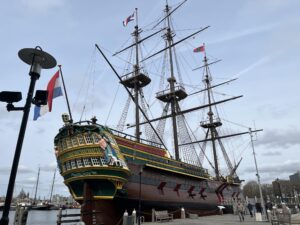 What we explored was a replica of the ship “Amsterdam” which first sailed the high seas in 1749.  The replica is absolutely incredible in its display – it really felt like I was on a ship in the 18th century.  One can walk all over the ship, traverse its narrow steps, duck into its tiny cabins, and sit beneath its towering masts.

On 8 January 1749, the original “Amsterdam”, a merchant vessel of the Dutch East India company (VOC), set sail from the Texel roadstead, bound for Batavia (today’s Jakarta). The “Amsterdam” never reached Batavia. For two weeks, the vessel battled storms and adverse winds in the North Sea and the Channel. Eventually, the “Amsterdam” lost its rudder in a heavy storm. The captain decided to strand the ship on the beach of Hastings (United Kingdom). The wreck still lies off the coast at Hastings and is visible when the tide is low.

200 Years ago, King William I commissioned the construction of a royal vessel. In those times, richly decorated rowing sloops were a ‘must have’ for European monarchs. Being a maritime nation par excellence, a royal rowing barge was also a perfect match for the Netherlands.

The Royal Barge is displayed in a separate building, right next to the jetty where the “Amsterdam” is docked, and very much worth a look.

The West Wing and East Wing of the Dutch Maritime Museum are both equally informative.  Here you will find excellent displays of old maps, model yachts, ship’s decorations, and navigational instruments.

We spent quite a bit of time here, just because there is so much to learn, and the exhibits are truly unique.  The collection of figureheads is breath-taking.